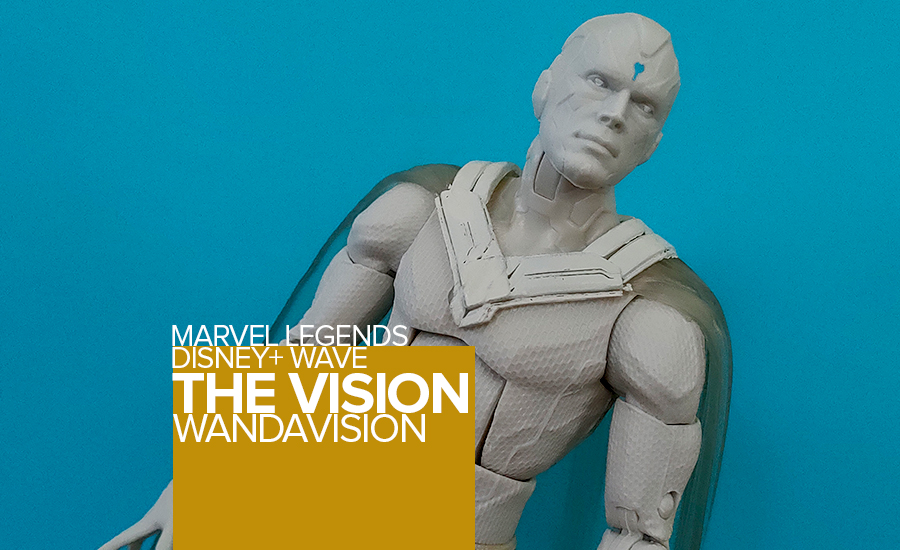 “What is grief is not love persevering?” This has got to be one of the most memorable quotes from the MCU franchise and it was delivered by none other than The Vision. During the last few episodes of the Wandavision series, a new version of The Vision appeared and it was the White Vision. I guess they made this to keep the character still intact in the MCU since the Vision that Wanda created within the hex disappeared as soon as the hex she created was destroyed.

This next figure review will be all about The White Vision from the Wandavision Disney+ TV series.

This set is part of the Disney+ Wave from the Marvel Legends release and the box and designs are pretty much similar. I did a review for the Scarlet Witch figure from the same series on this site as well – go check it out. The box has White Vision’s graphic art portrait on either side and the same image at the back of the box. 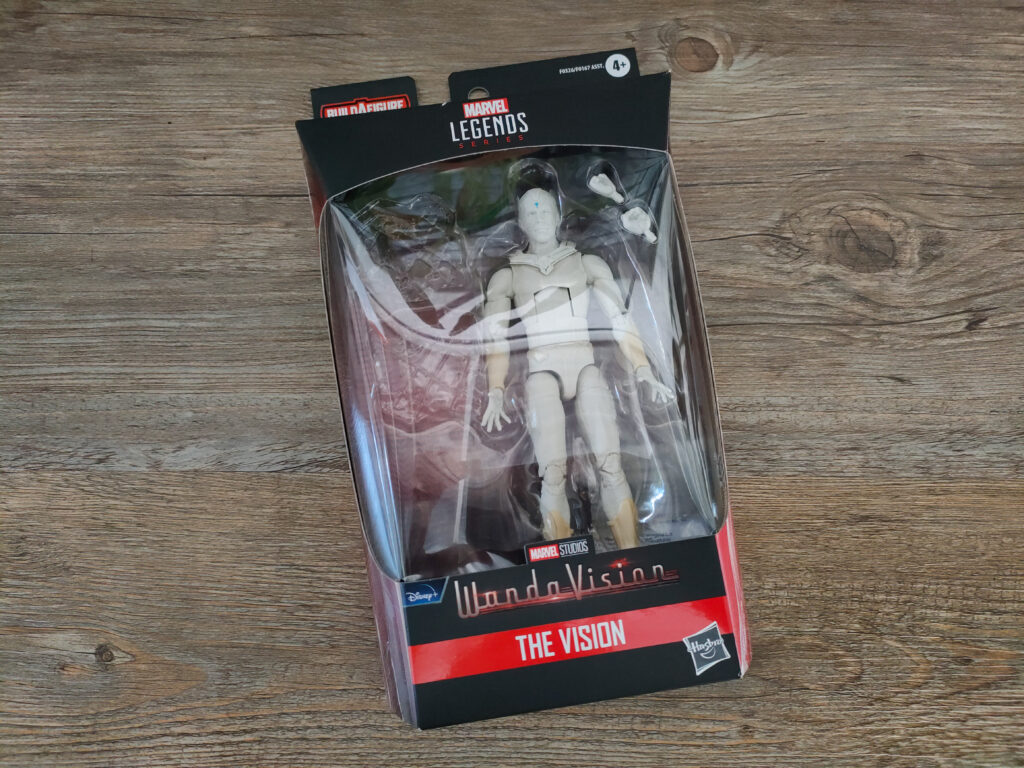 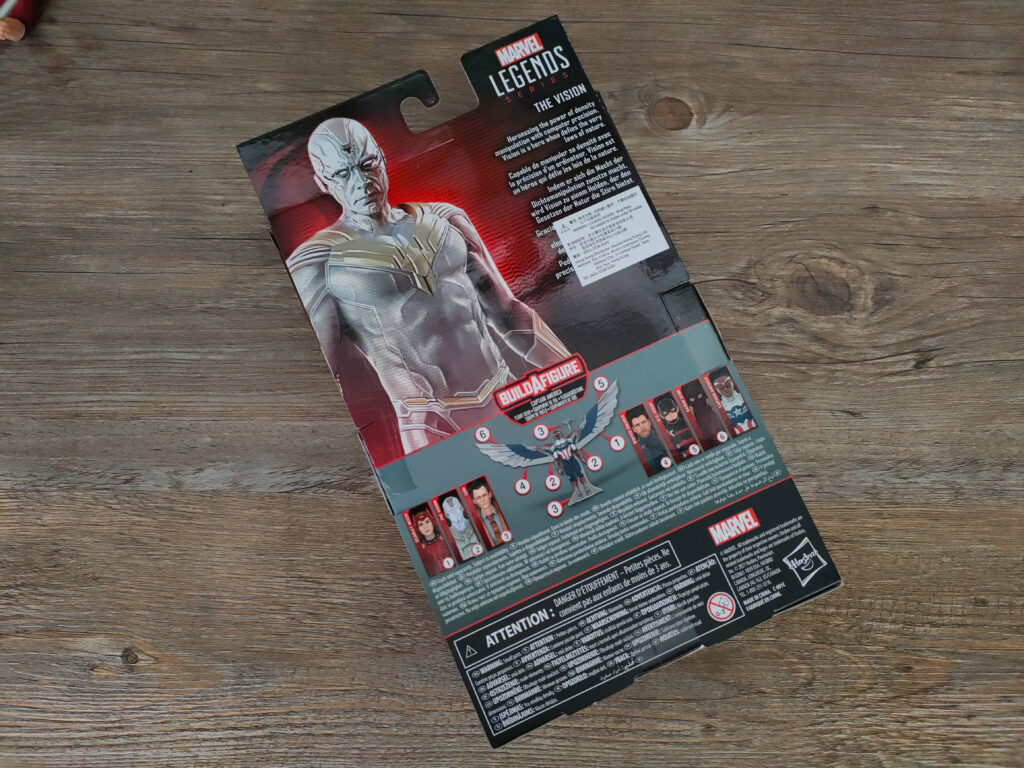 *Disclaimer – the figure I got doesn’t include the BAF parts. The BAF parts for the White Vision set include 2 lower part wings for the Sam Wilson – Captain America wings. 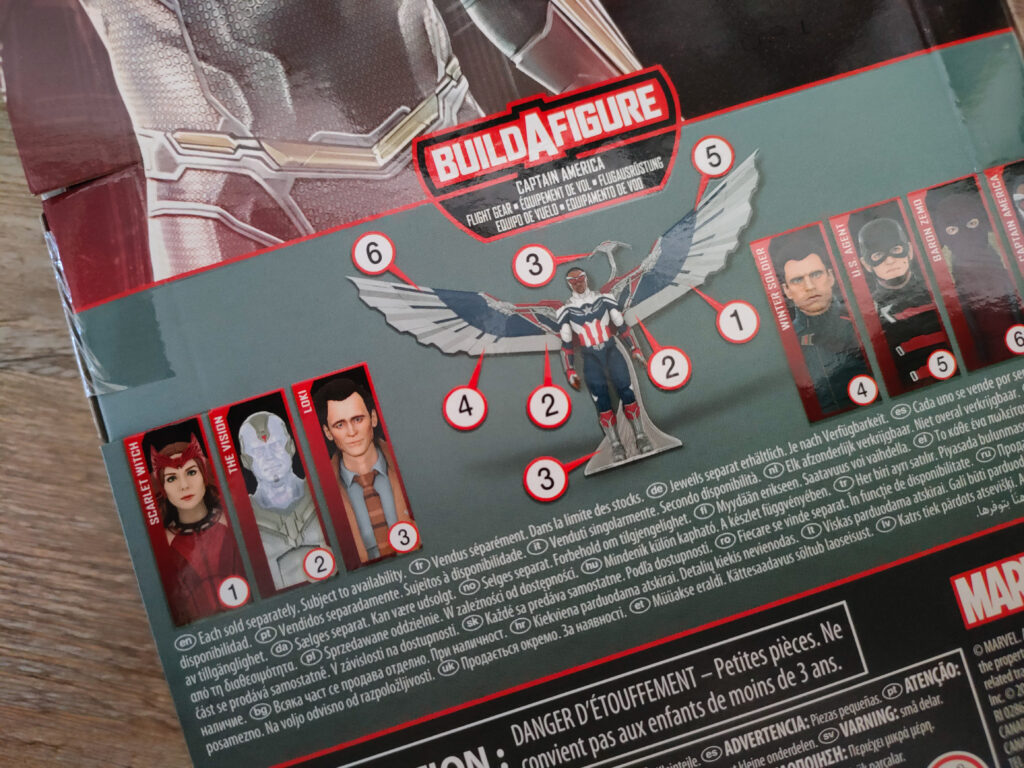 My first impression on the White Vision from the show was that it was cool – I also kind of reimagined him to be an action figure. Lo and behold, the first official figure was produced by Hasbro’s Marvel Legends line and it did not disappoint! Although there is some questionable color selection for some of the parts – the figure still looks dope! 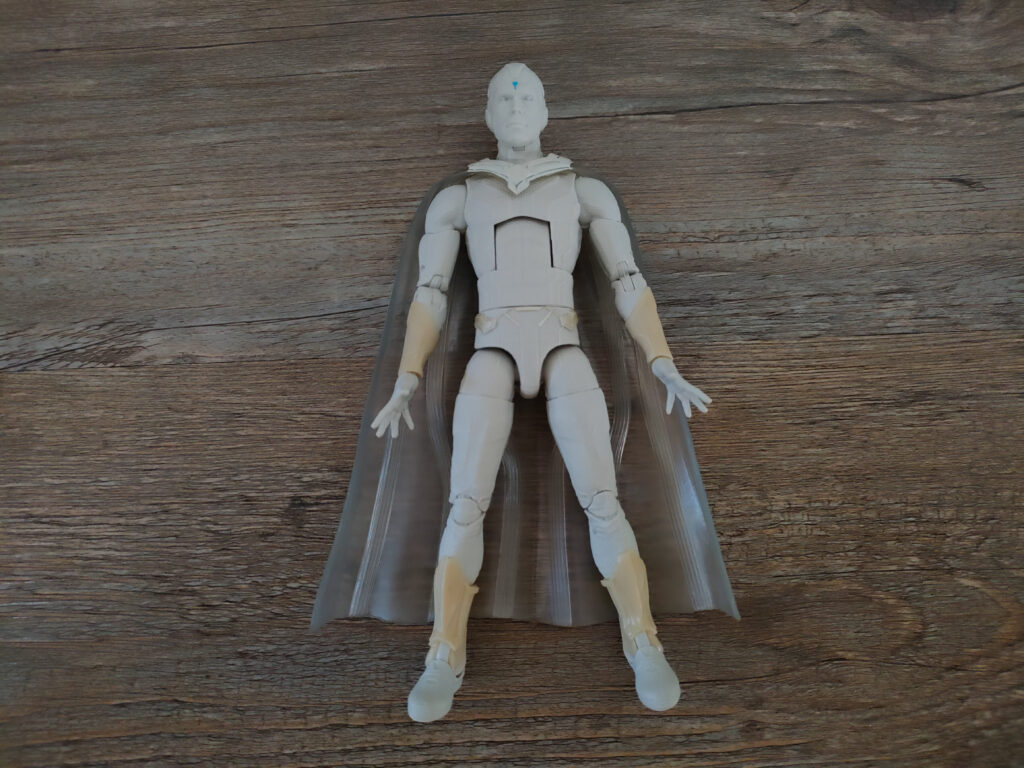 The set, if purchased completely, includes BAF parts as I’ve mentioned earlier. Aside from the BAF figures, it also includes interchangeable closed fists. Given that this is a Marvel Legend’s figure, we should not expect much in terms of accessories. 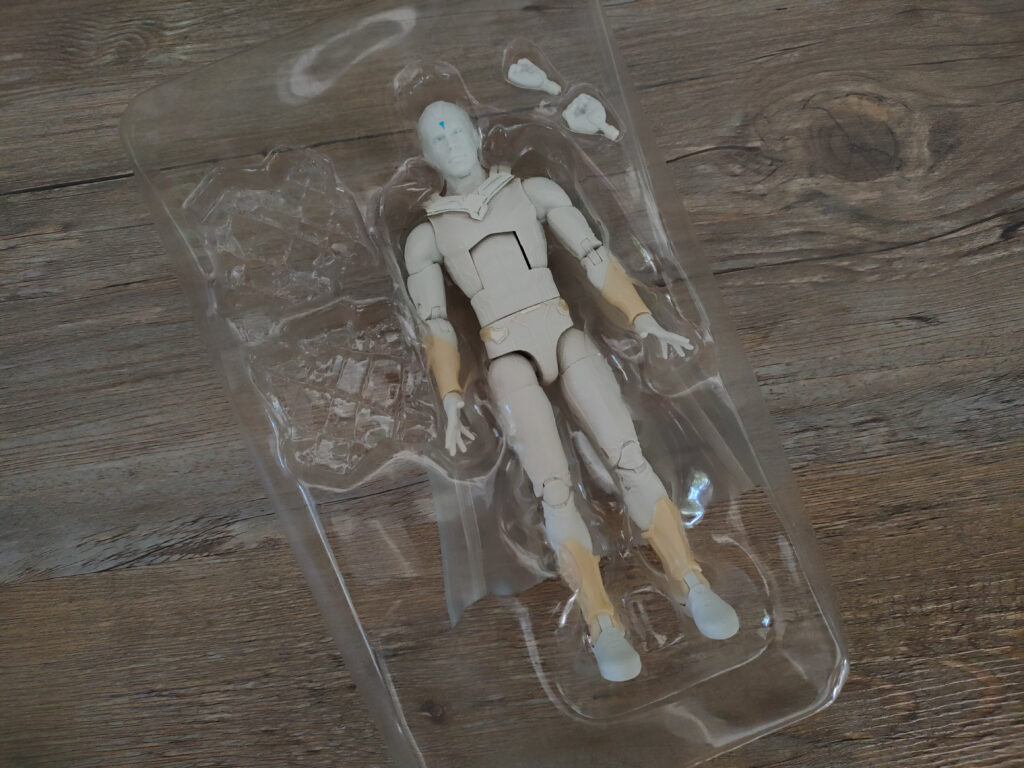 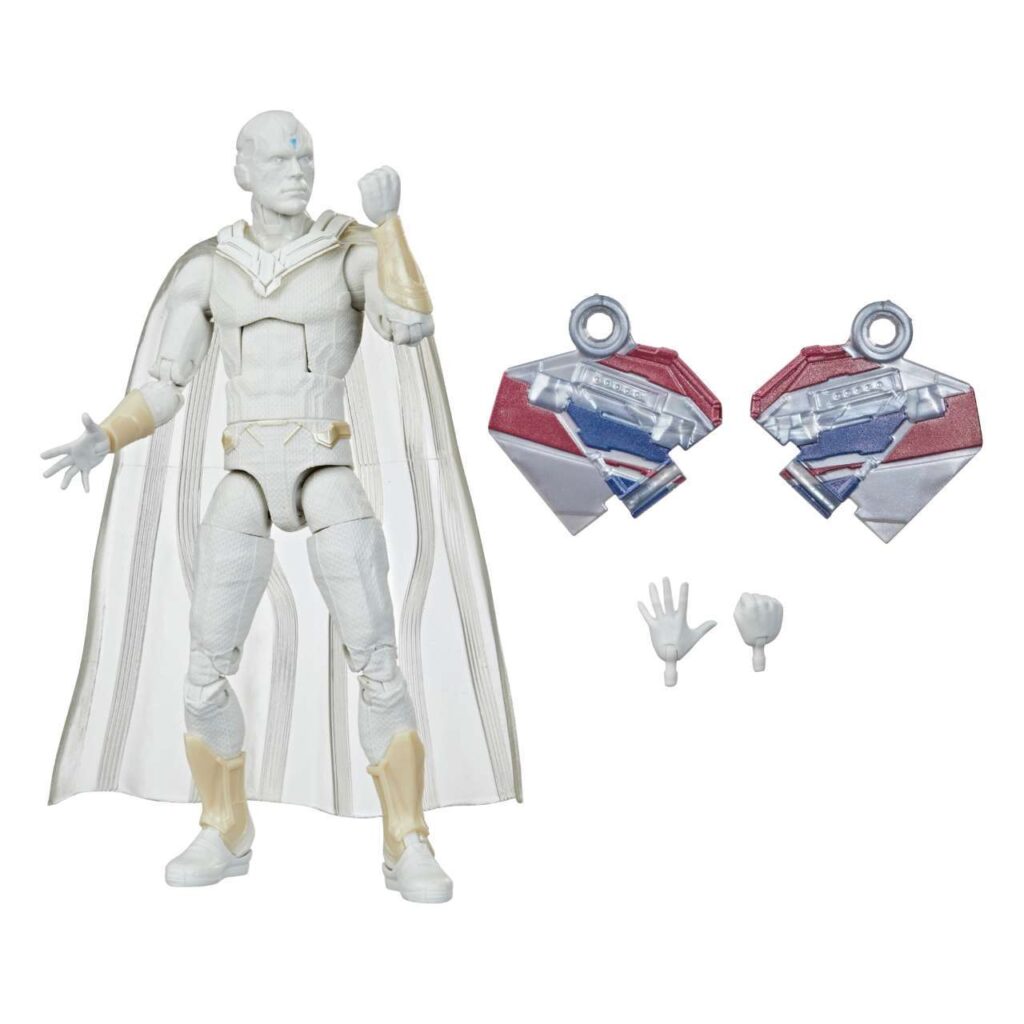 The figure’s cape is inserted inside the plastic case, so you have to carefully pull it out. You can somehow fold the cape to make it easier to remove. 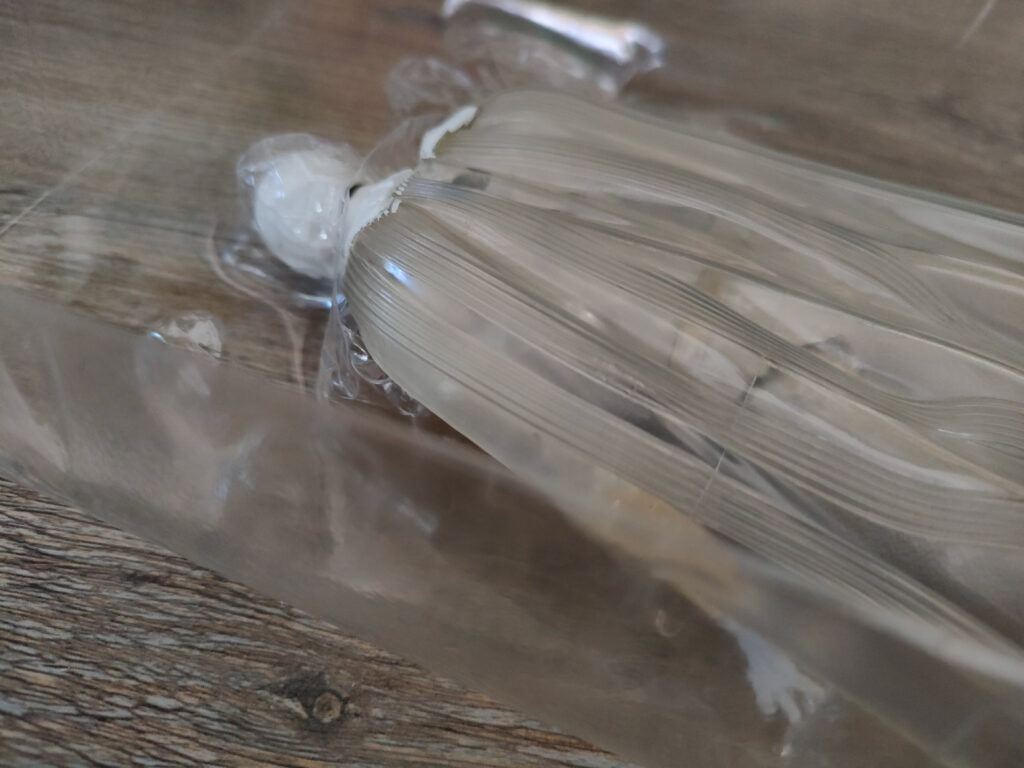 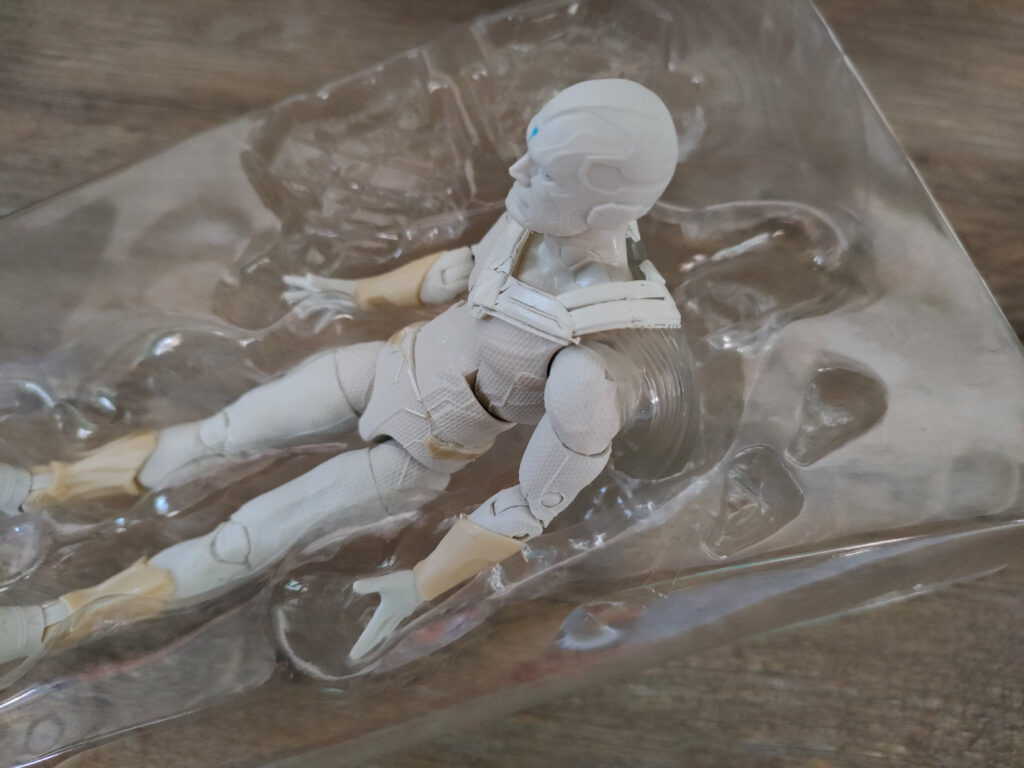 The figure is pretty solid in appearance. The best thing about the figure would be that it’s super white but even though the figure is quite monotonous in color – it still has quite a lot of details in the suit texture. 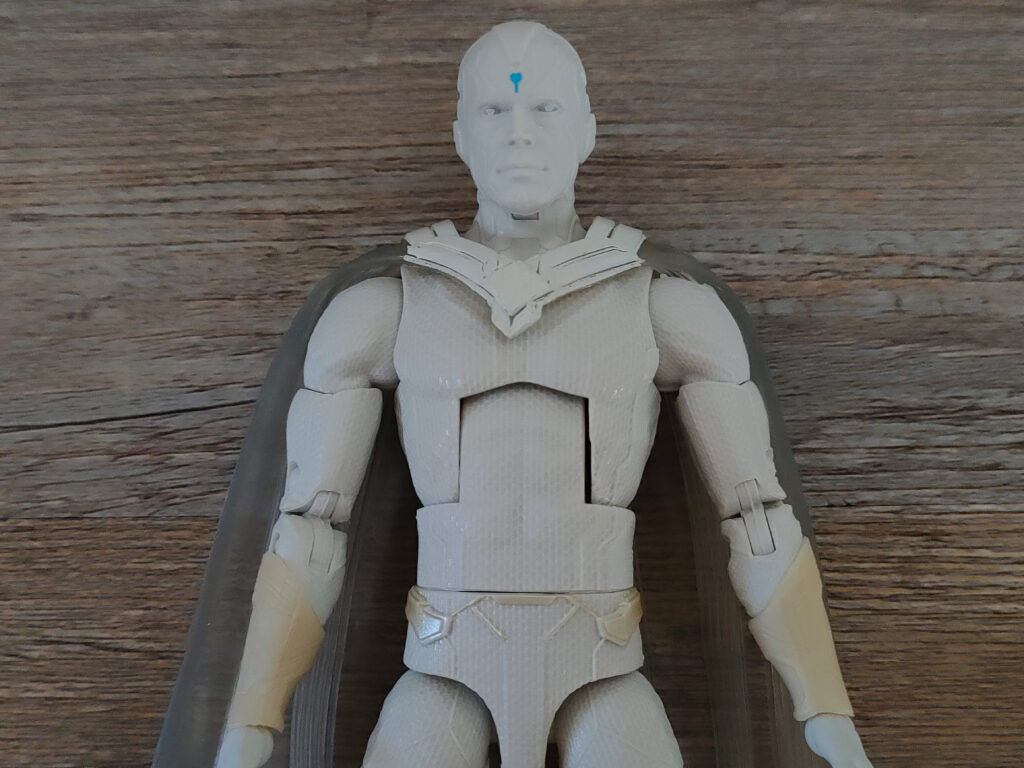 The paint apps for most parts are okay although some parts weren’t painted full – in my case, the cape holder has a few missing paints on it. 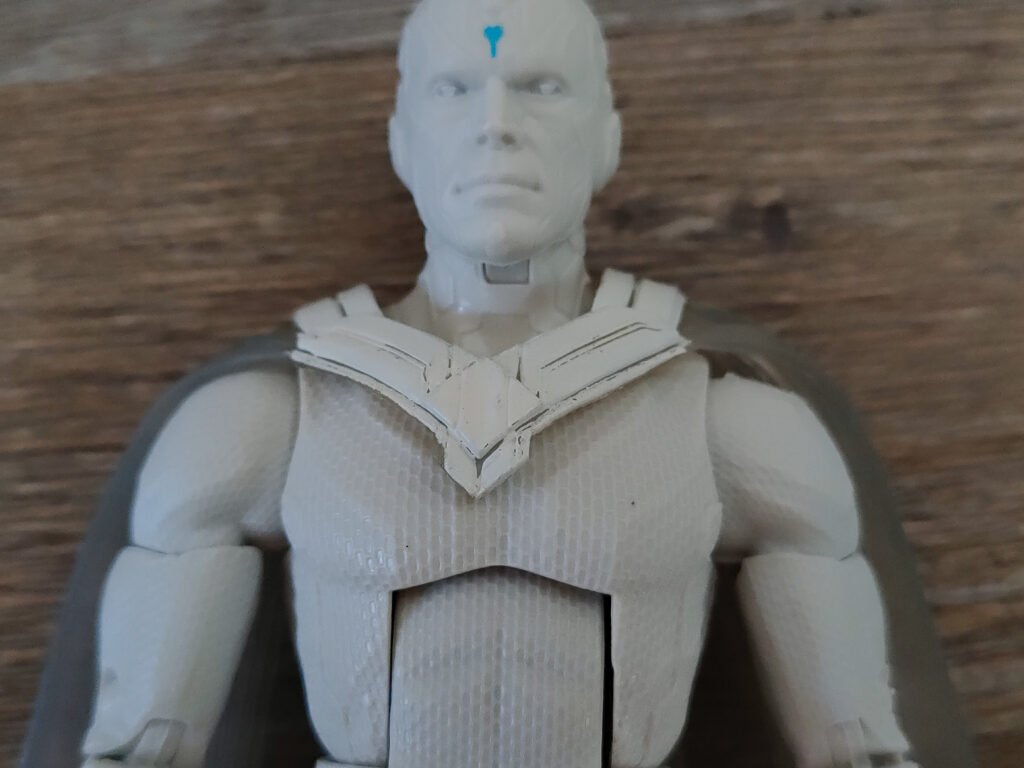 Like I mentioned the questionable colors from his suit are the cream color located in the shin and forearms in his suit. It quite stands out as it contrasts with the overall color of the figure. This probably would be my main concern, they could’ve used a lighter shade perhaps? 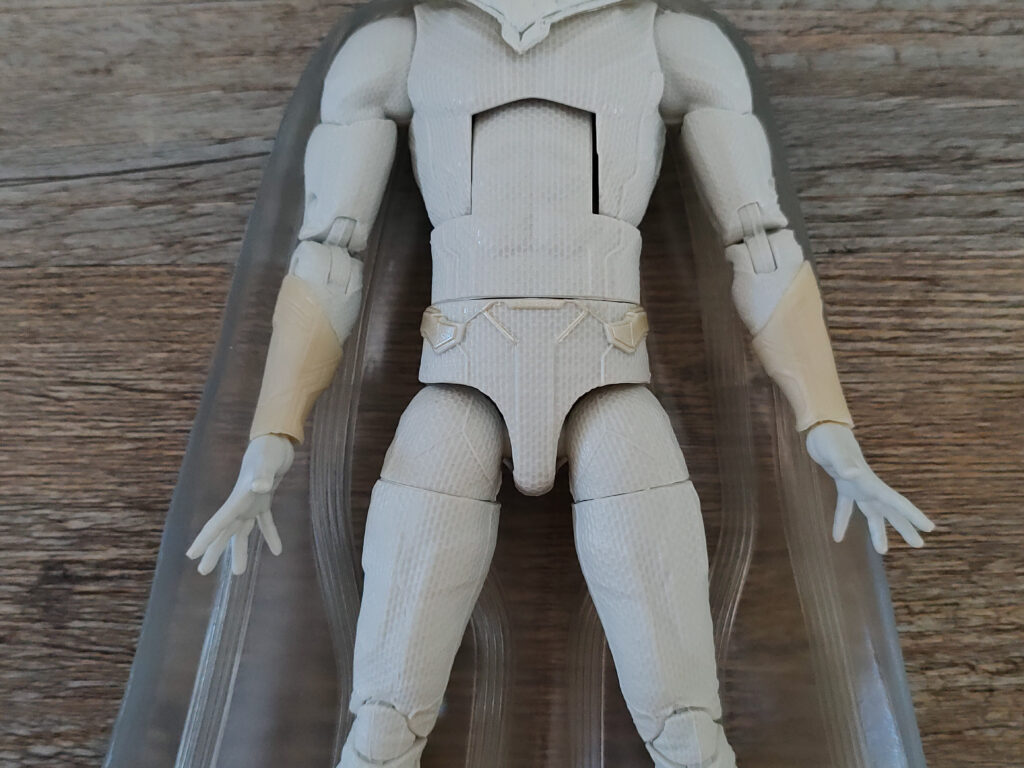 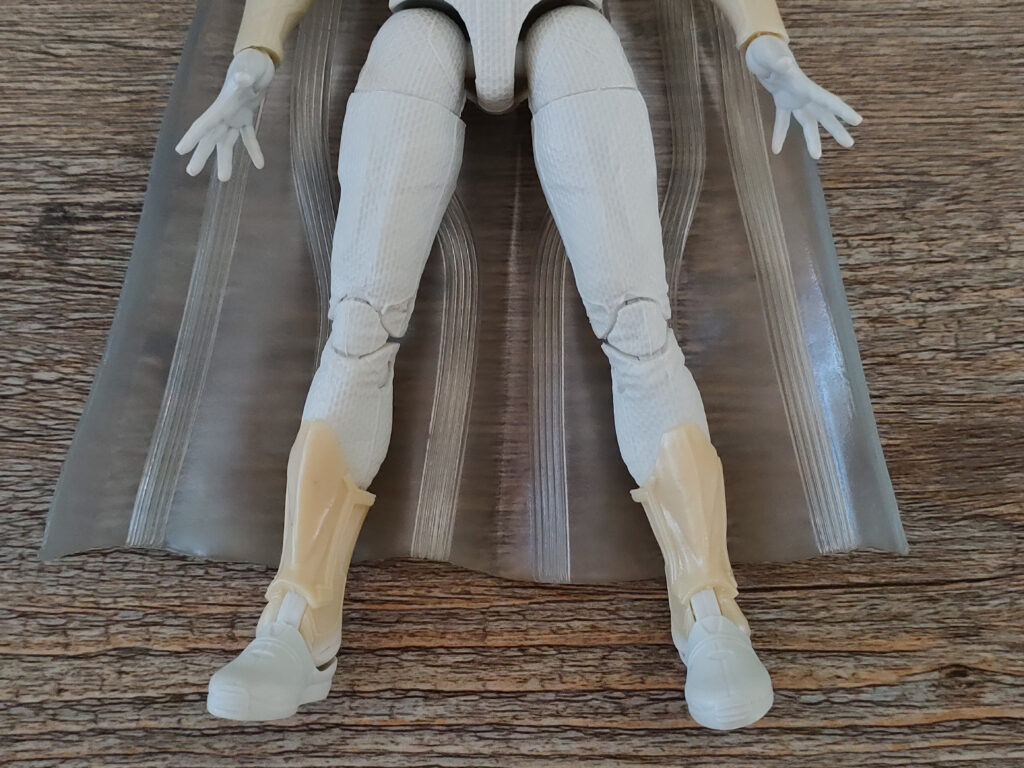 The figure has many articulation points from the head down to the feet. The ab-crunch articulation is also present and if I may say, he really can bend! 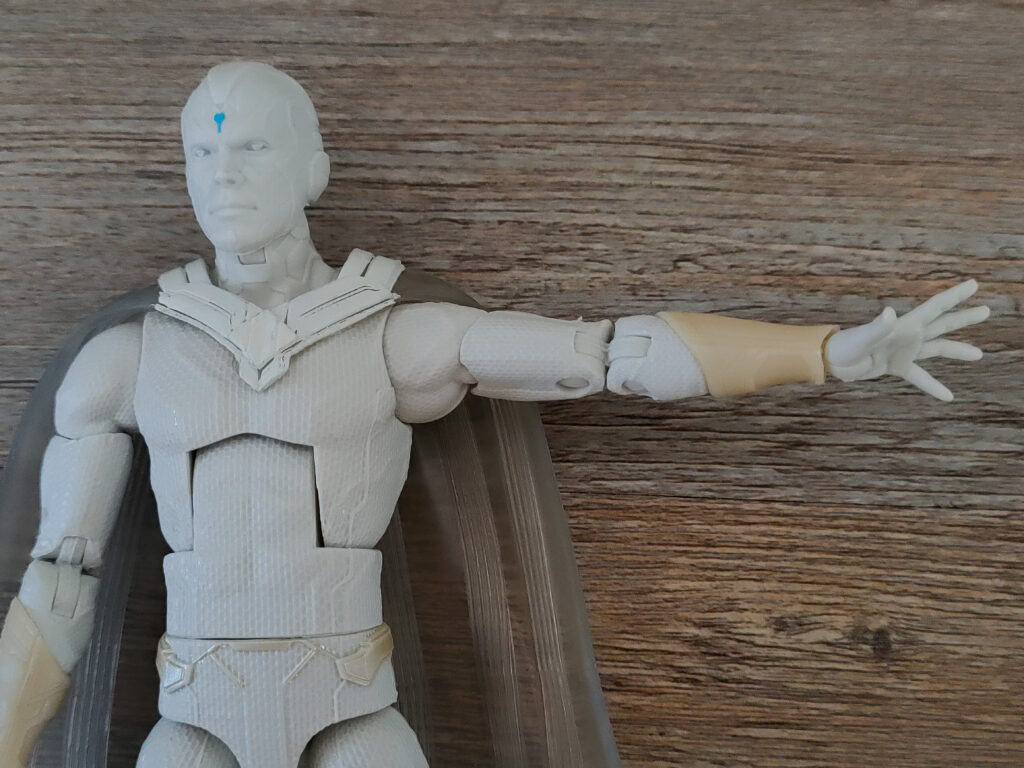 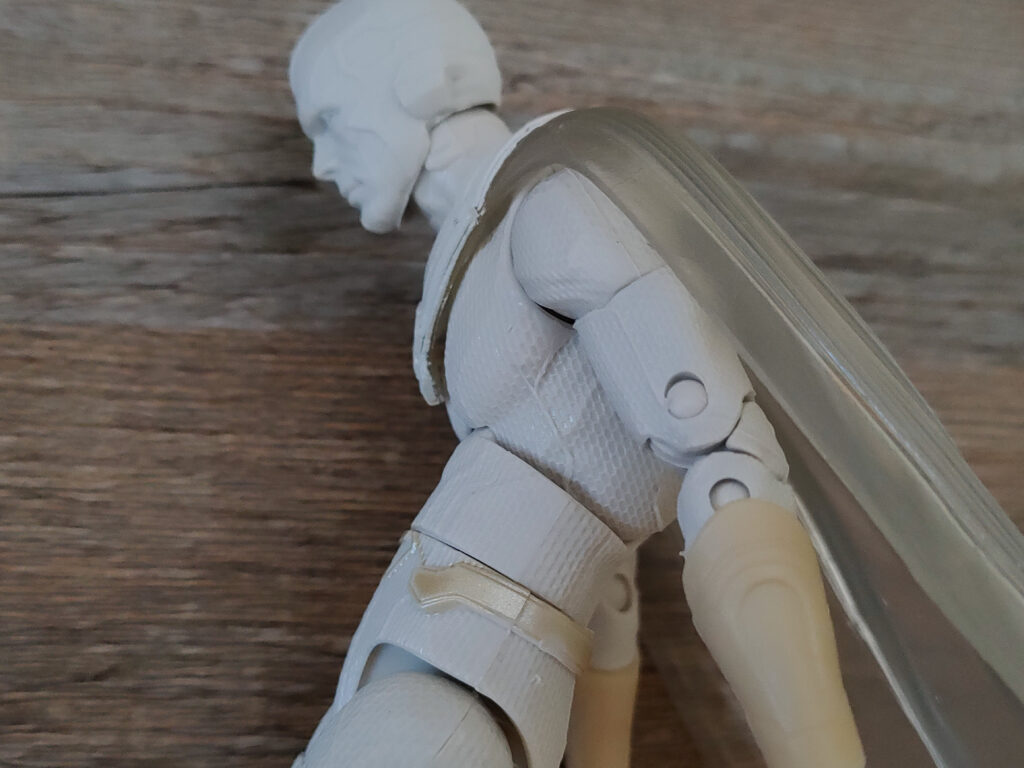 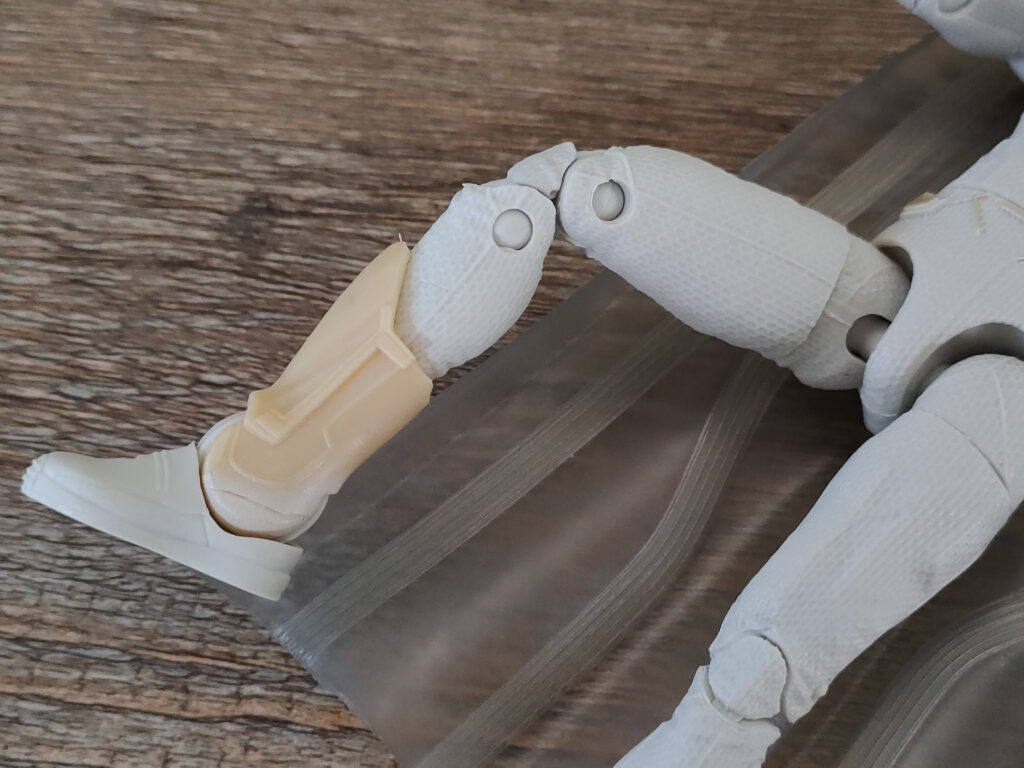 One of the things I really liked about this figure is the cape. The cape looks very cool and it has textures and a flowy pattern. 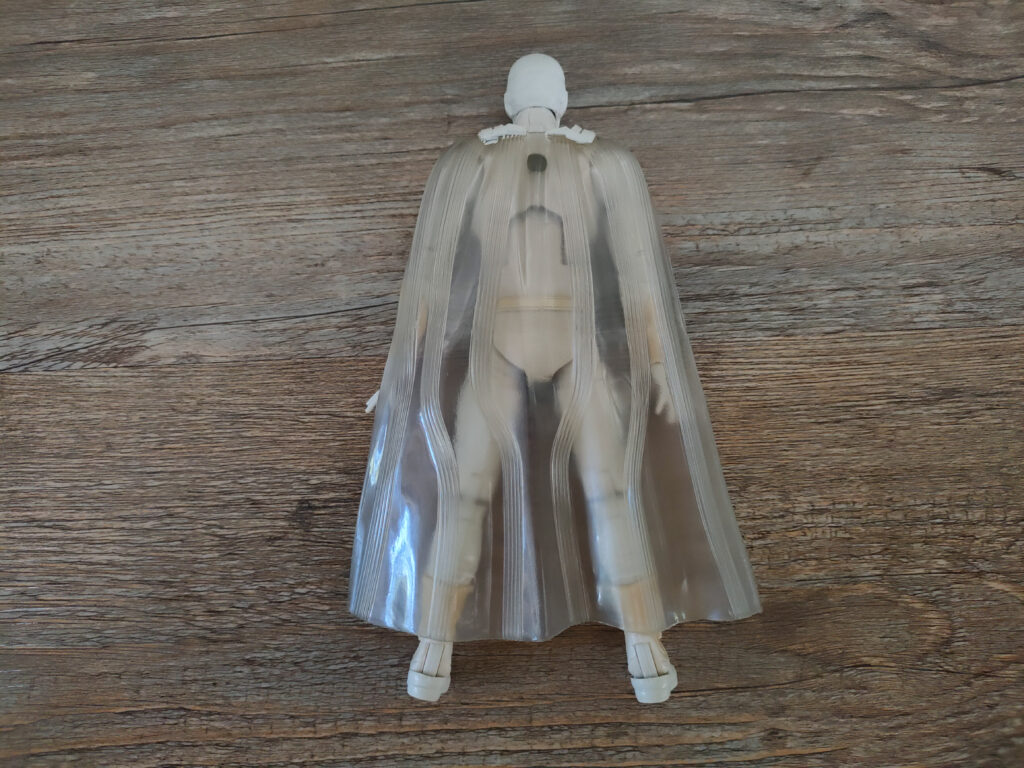 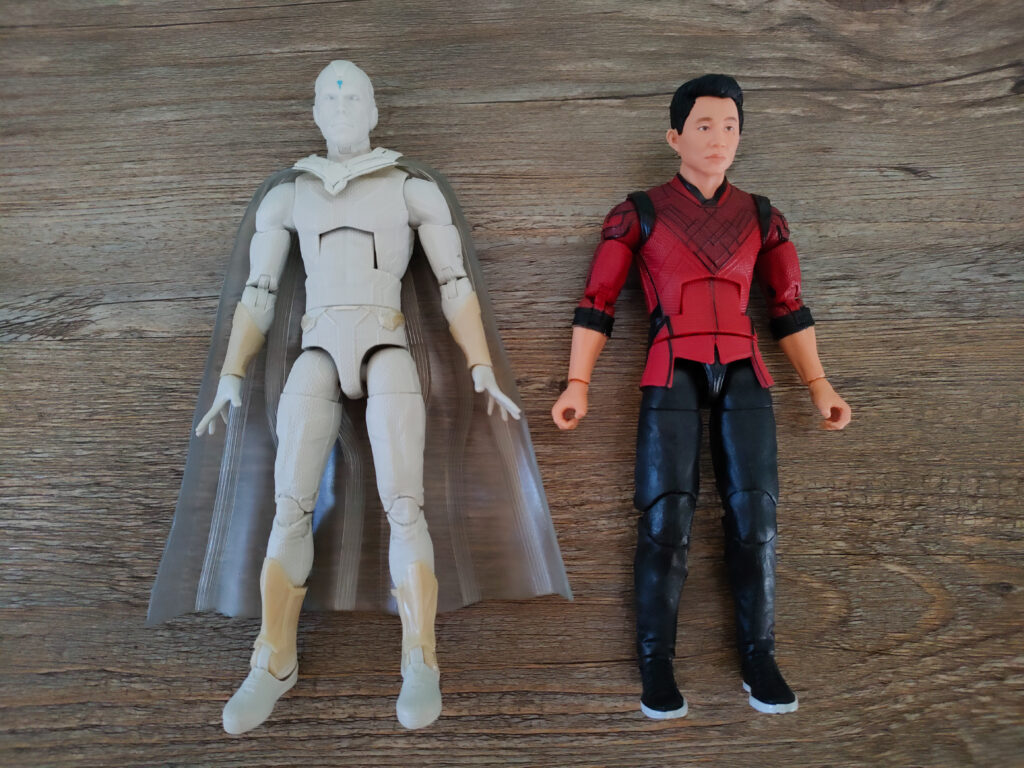 Since I’m a huge fan of the Wandavision series, I really promised myself to get both the Scarlet Witch figure and the White Vision figure as soon as it was released. You might want to do the same if you’re really a fan of both characters as it is a good addition to your collection. I’m already sure that the Marvel Legends figure collectors already have this in their collection and purchase list. 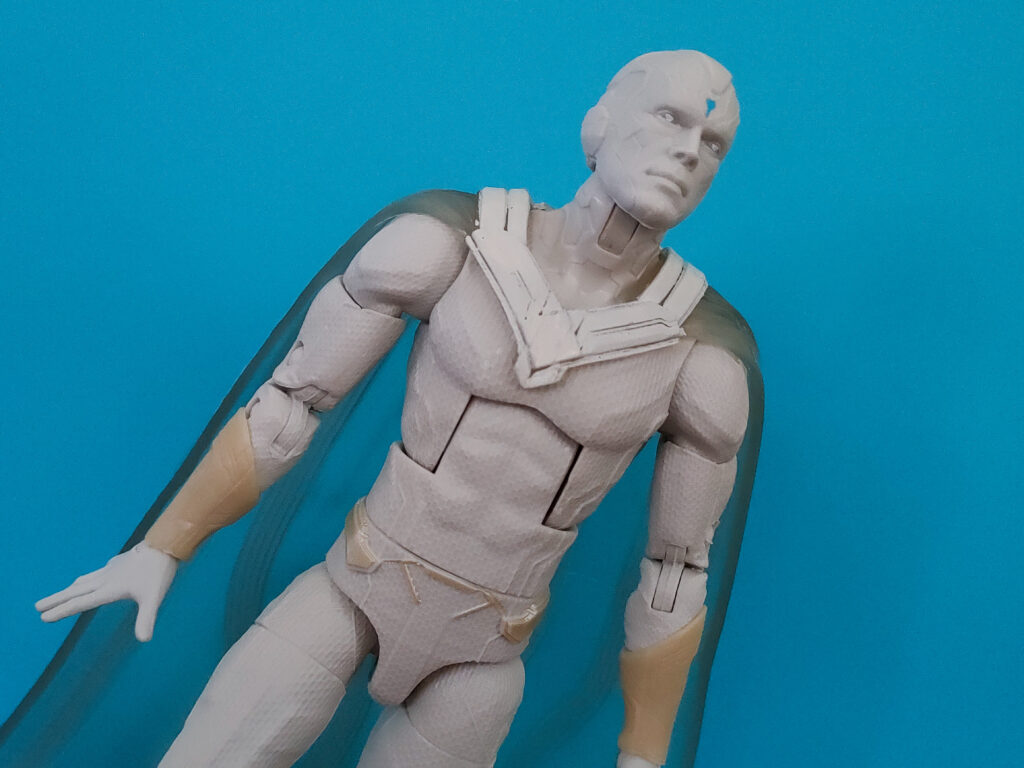 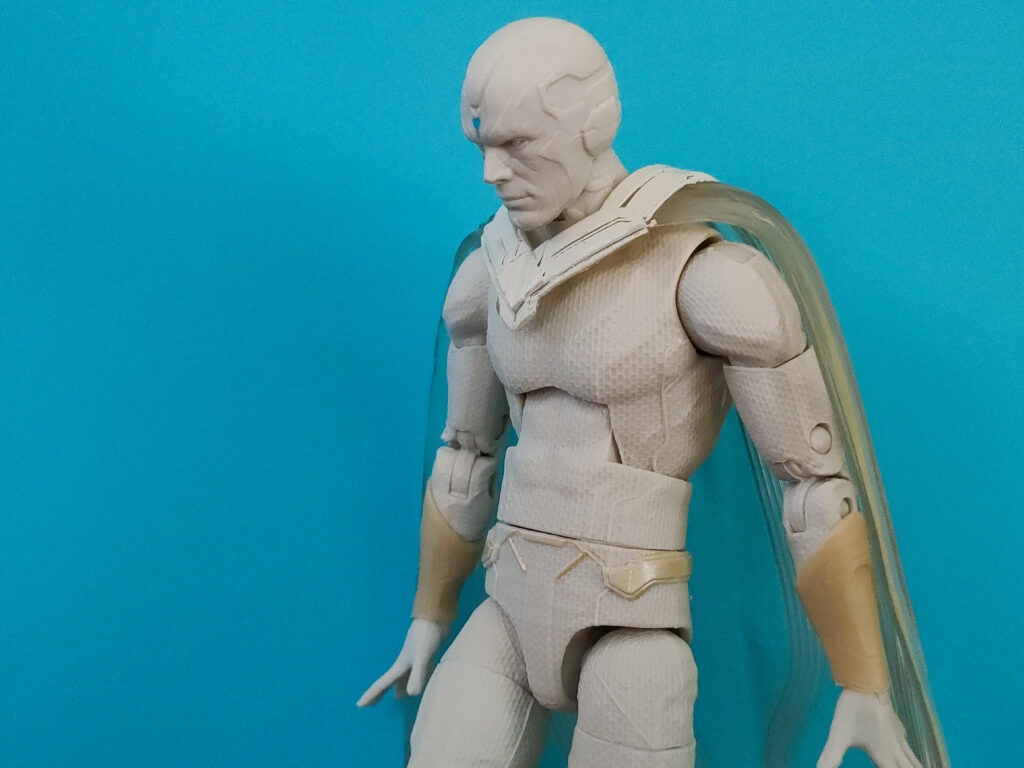 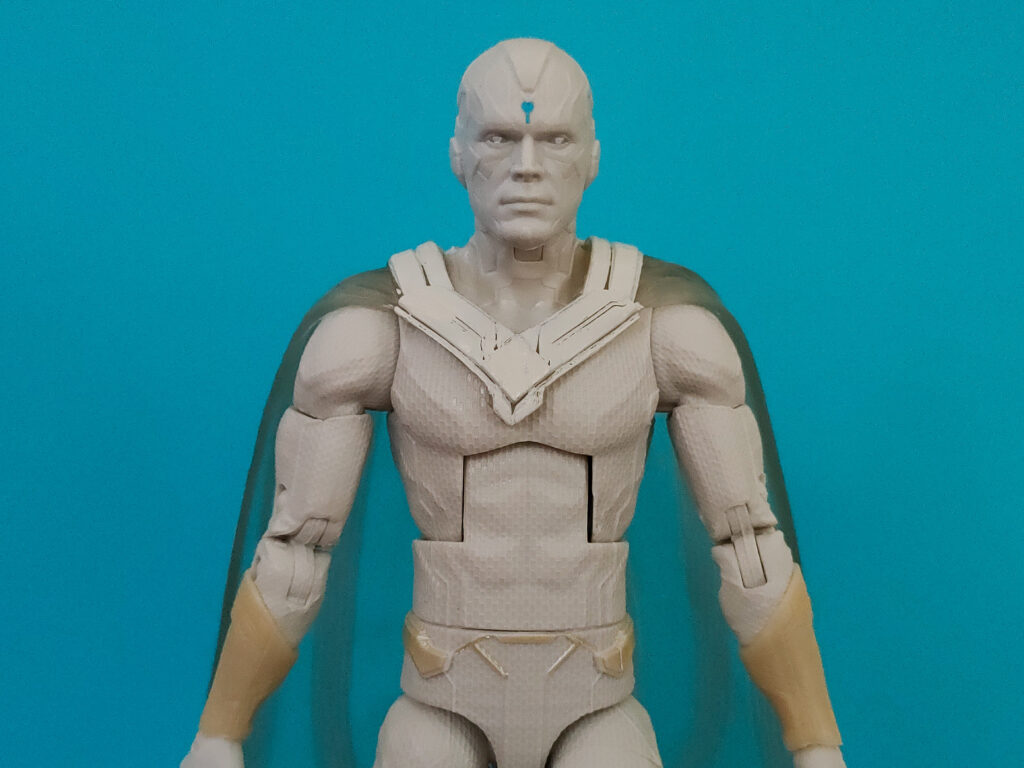 Are we going to see both superheroes together as the MCU Phase 4 progresses? 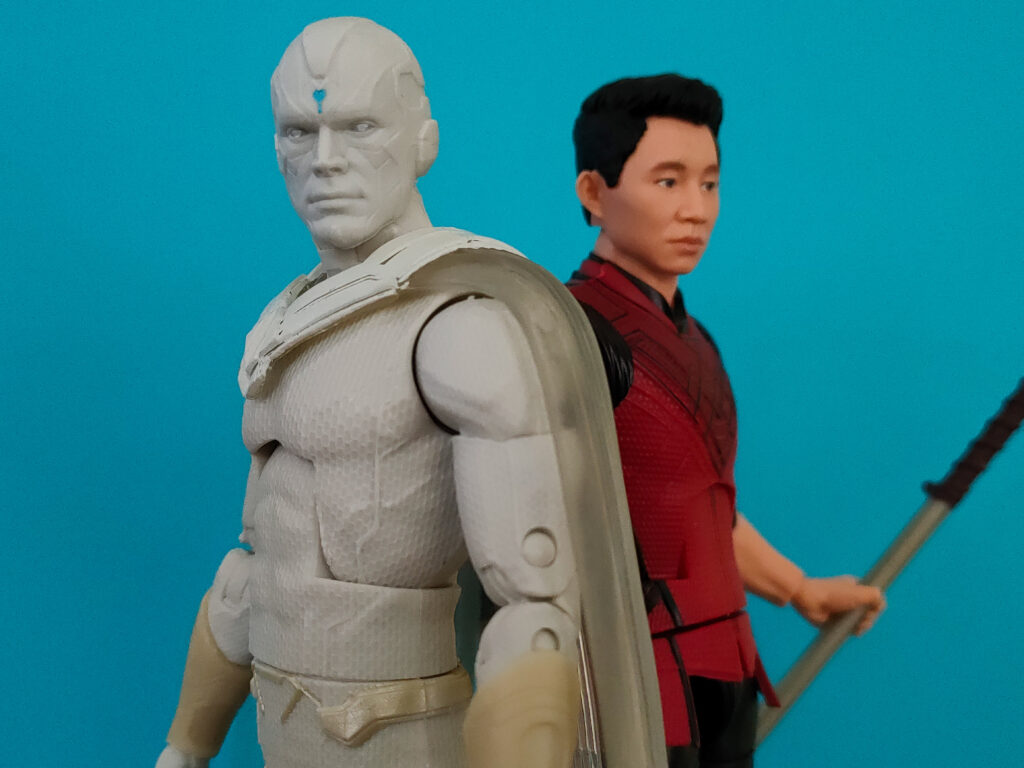 Make sure to follow this site for more figure reviews!