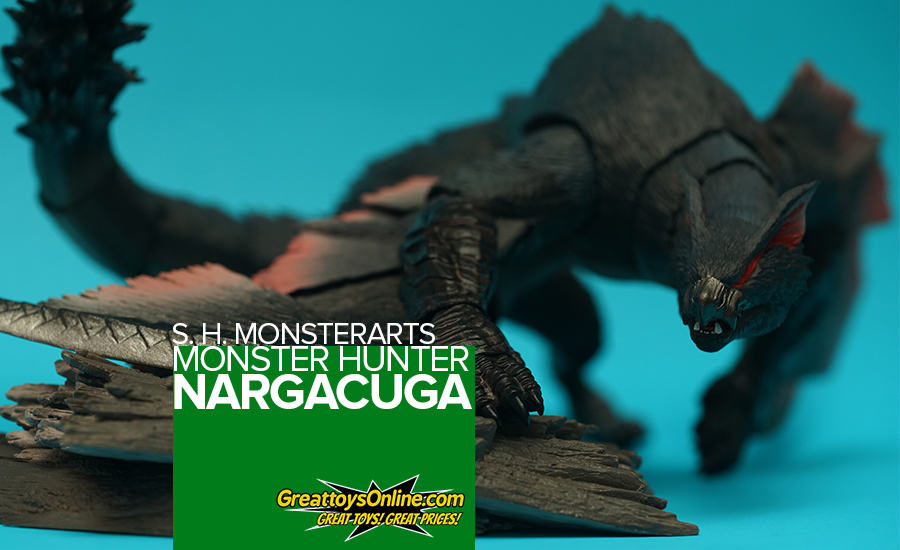 Coming off from the last S.H.MonsterArts Monster Hunter Liolaeus review, I’m going to review another monster from the same series, Nargacuga. Nargacuca is a Flying Wyvern that was introduced in the Monster Hunter Freedom Unite game. The look of Nargacugas resembles that of a predatory blank panther with menacing red eyes and black fur.

This review is brought to us by our friends from GreatToys Online, if you want to check out more Monster Hunter stuff, go visit their website!

Similar to Liolaeus, the back of the box has claw marks wherein you can see what’s inside the box. The box art is very simple as it only showcases the main color palette of Nargacuga – mainly black with a touch of blue and violet. 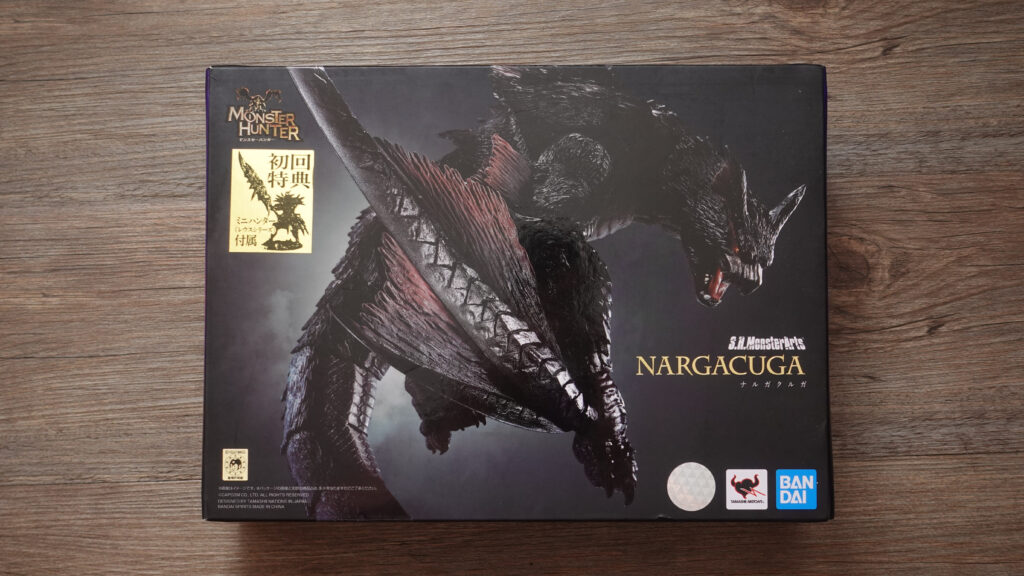 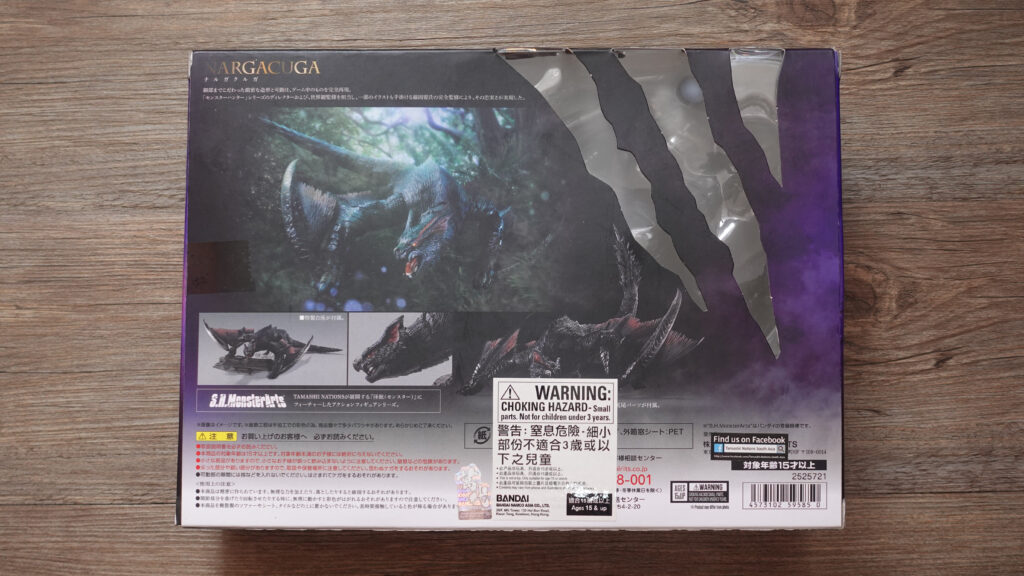 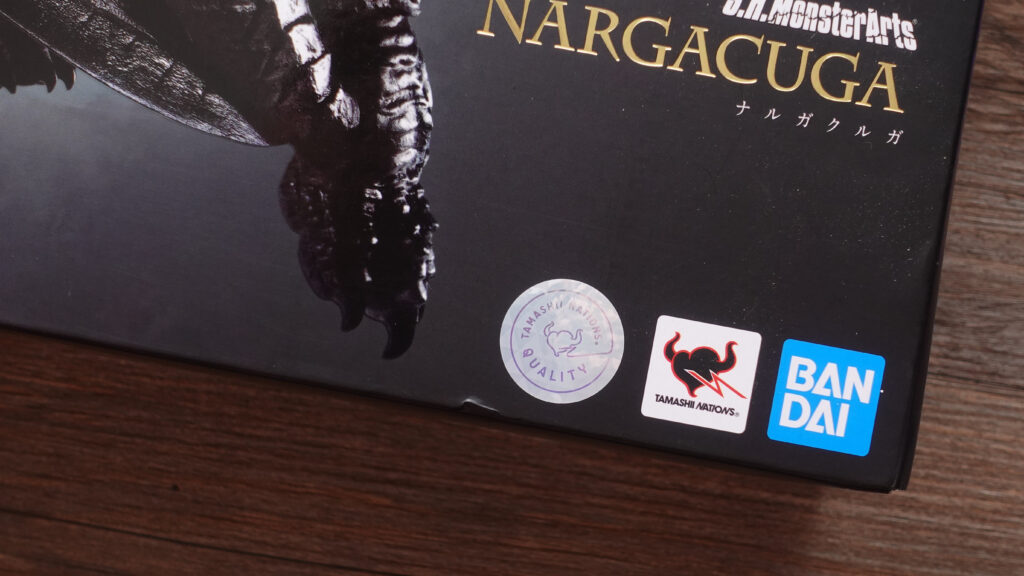 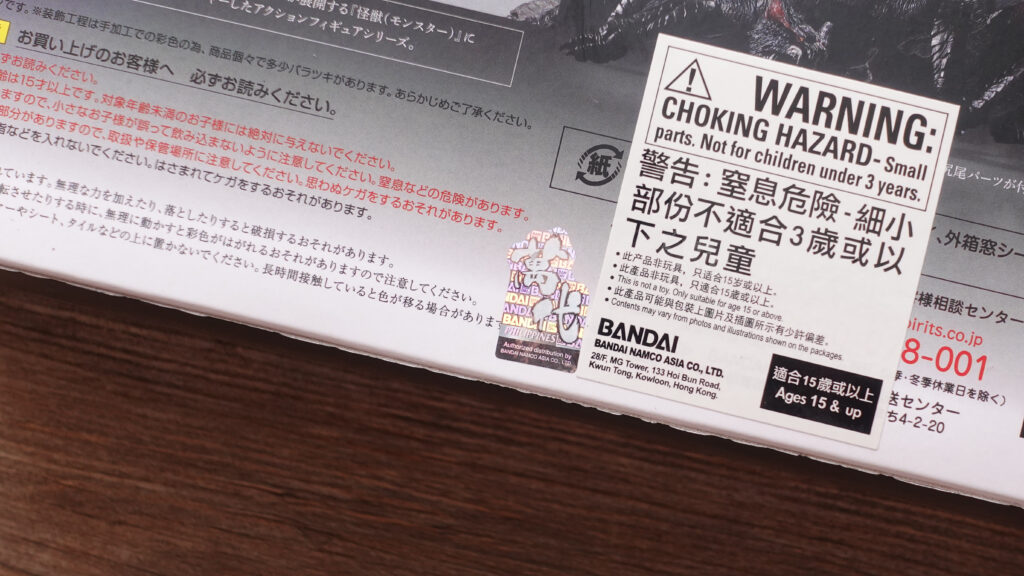 Given that I’ve reviewed the Monster Hunter Liolaeus earlier, I’m expecting that this figure would also have the same detailed attention for the texture and the paint apps. I’m glad to say that the Nargacuga figure did not disappoint, the figures are totally different compared to the Liolaeus one but it has the same quality finish. 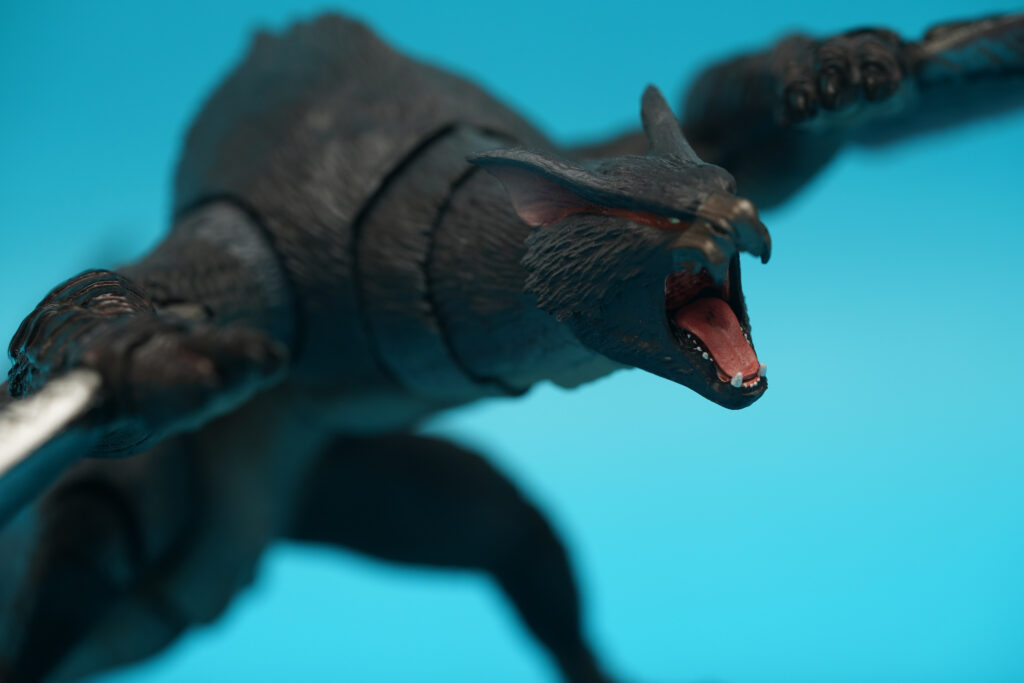 The Nargacuga figure set includes quite a number of accessories that come with it. The set includes a different head plate, sharp attack tail, severed tail part, the standard figure stand, and an unpainted hunter figurine. 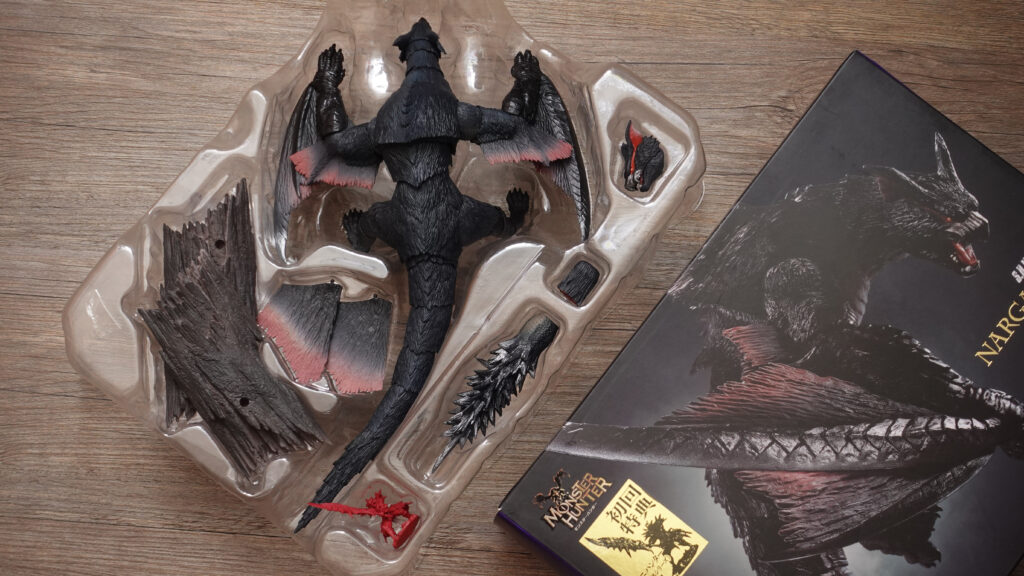 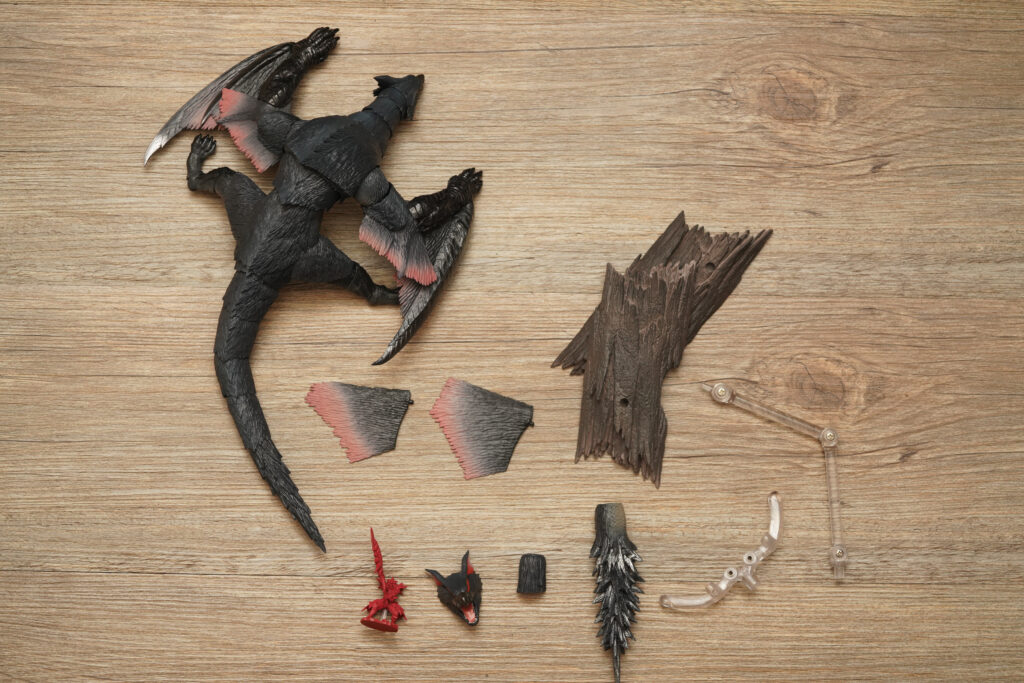 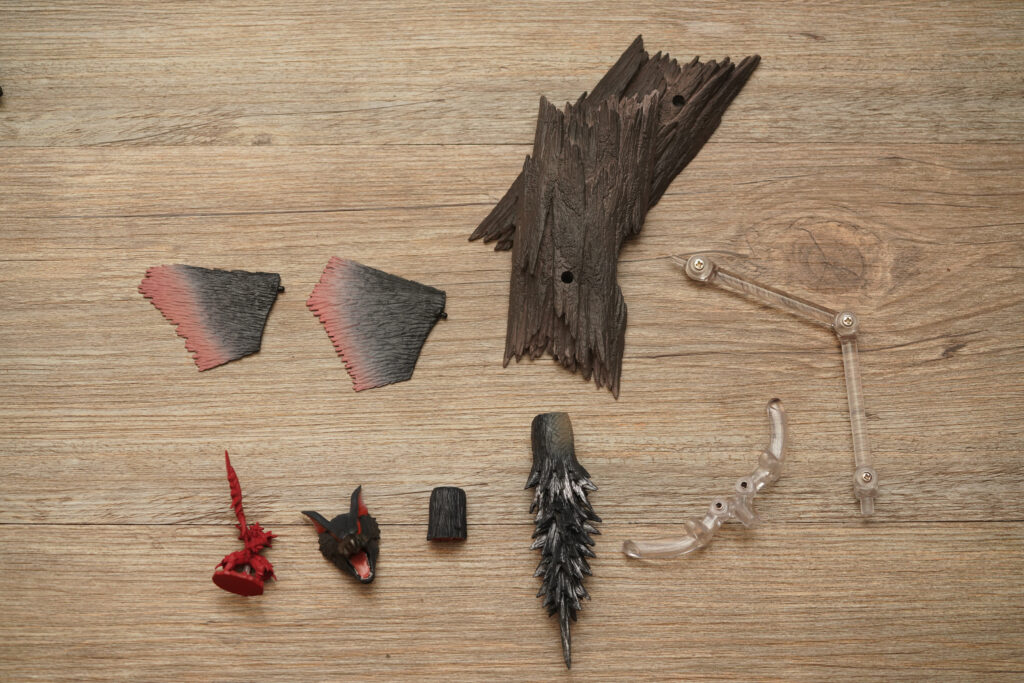 The paint details on the attack tail are neatly done, it gives a frosted or icy feel as the finish is quite metallic or shiny in appearance. 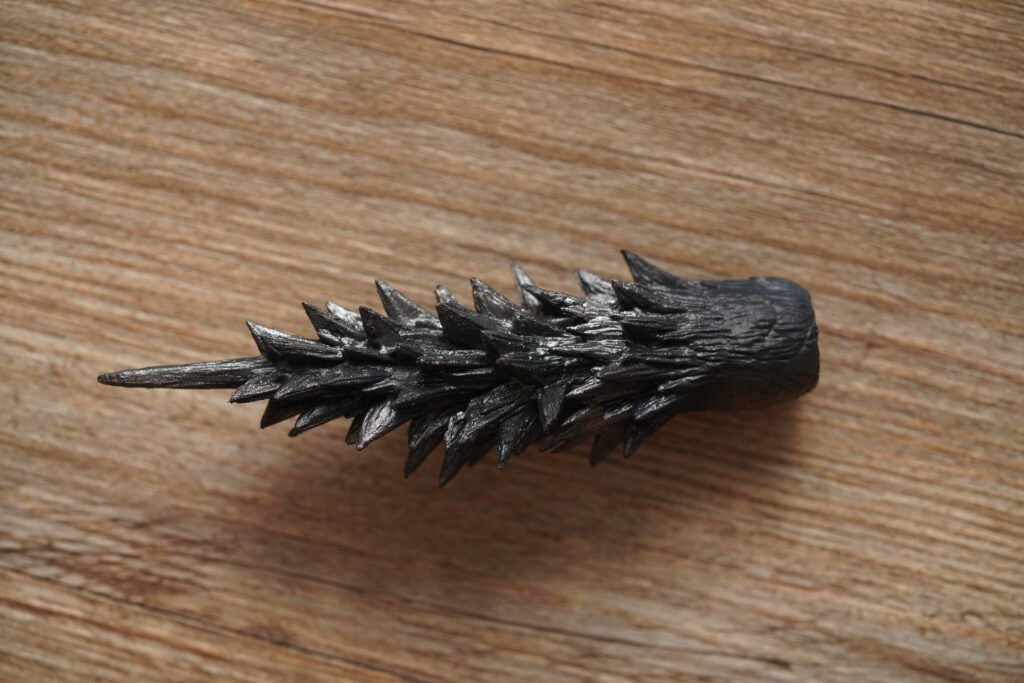 The base for this set is quite different as it is in a form of tree bark which is really good when it comes to posing it with the main figure. 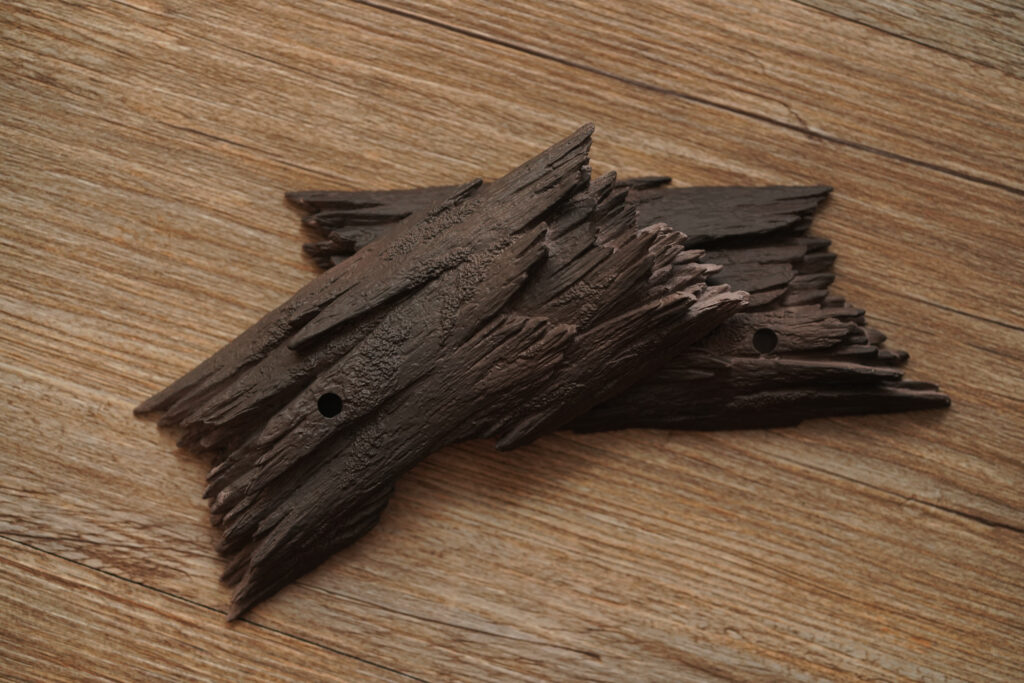 I’m happy that this Nargacuga figure is not just painted black, there are some color elements such as the red shades that are added to the figure’s finish which makes it appear very surreal. 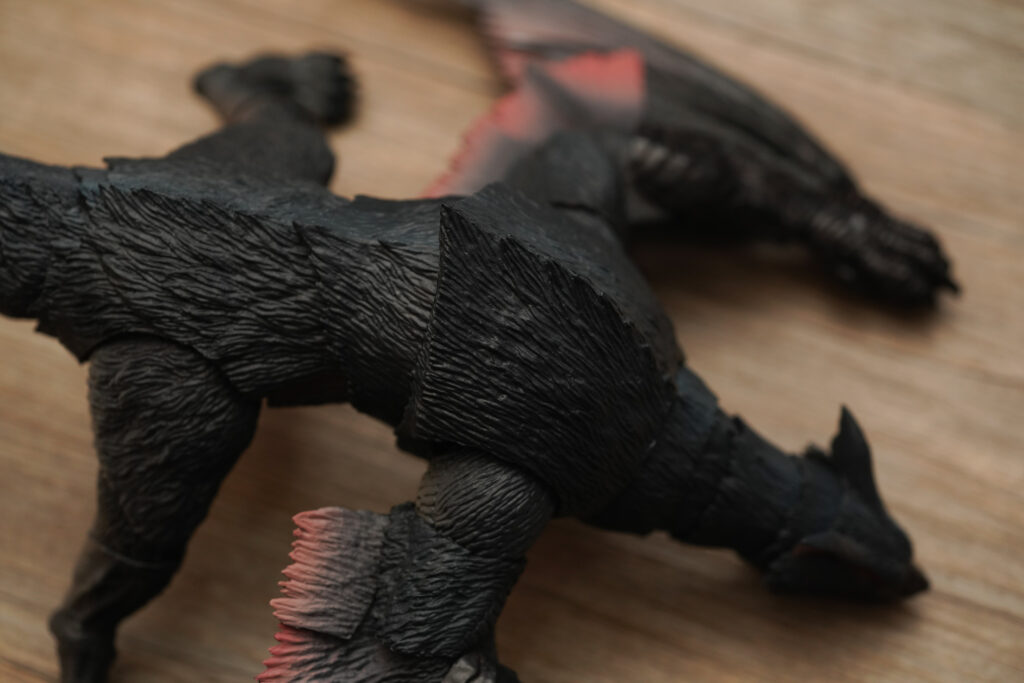 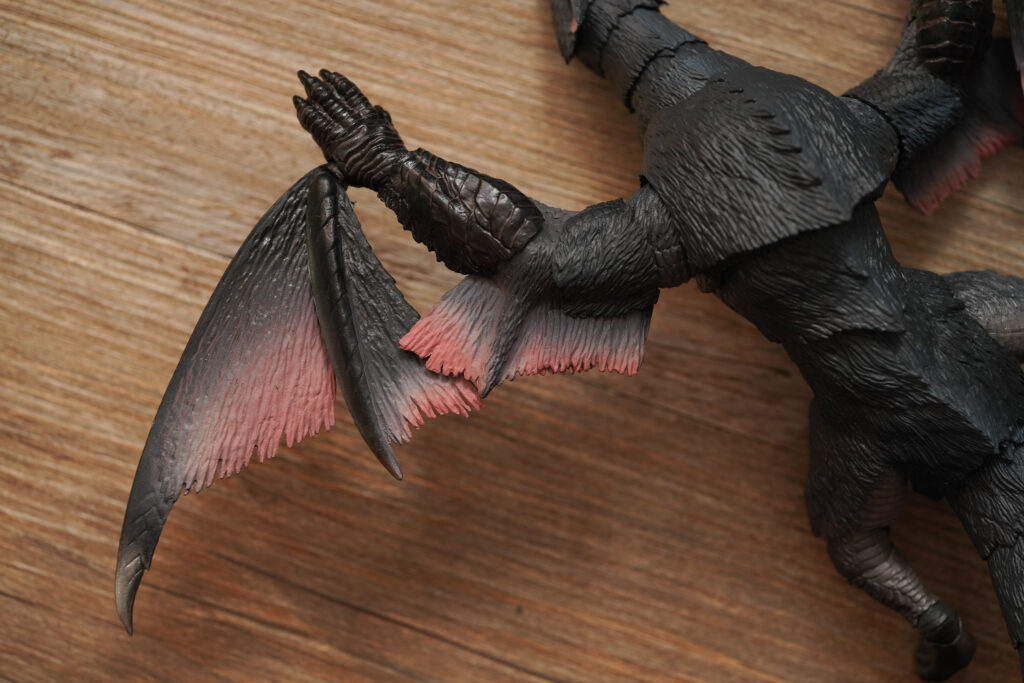 The figure also showcases intricate details such as the furs and scales of Nargacuga which is nicely done and finished.

The extra head part showcases Nargacuga with its red eyes, what I liked about this figure is the paint details inside the mouth as it appears very bloody – the paint app was done very well. 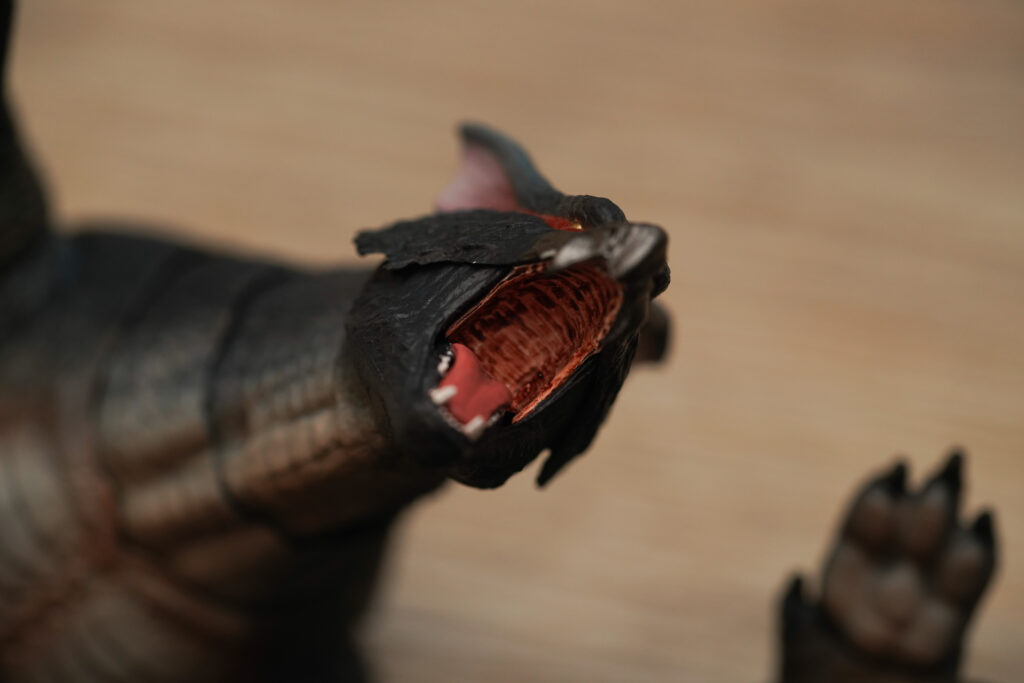 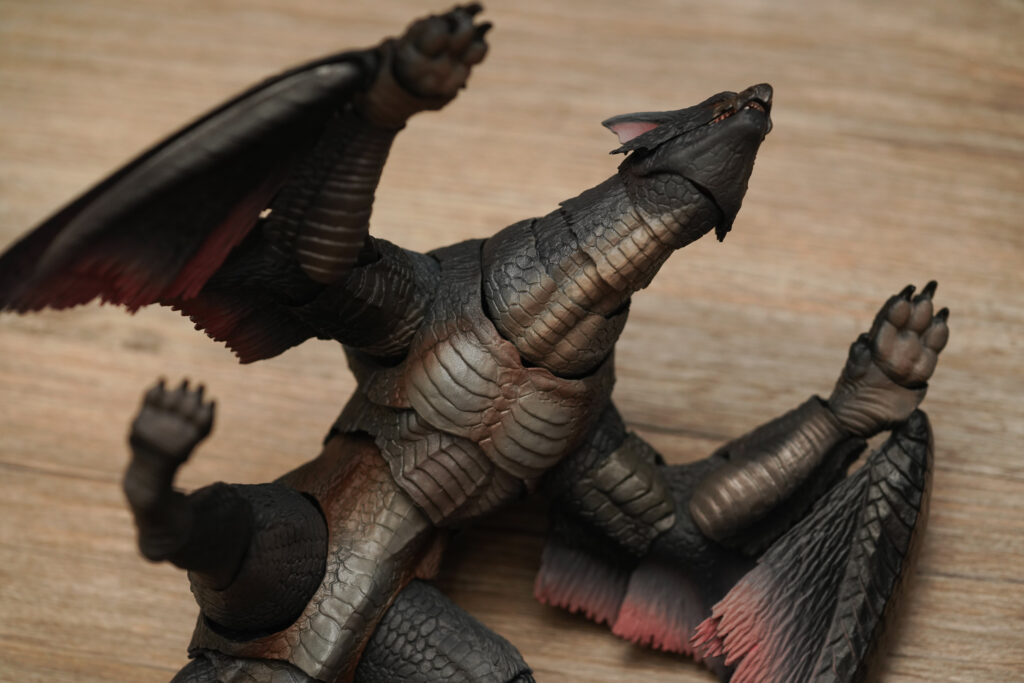 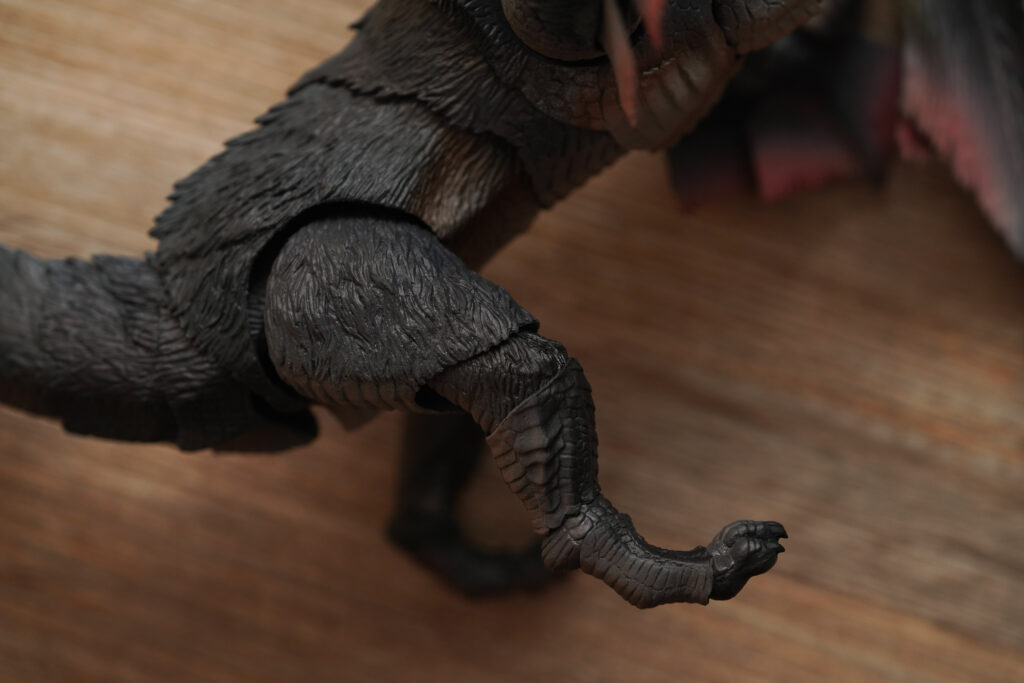 The figure has many points of articulation as well from the head, main body down to the tail. The wings can be interchanged with the spare wings part by carefully pulling it out the main socket of the joint and reattaching it. 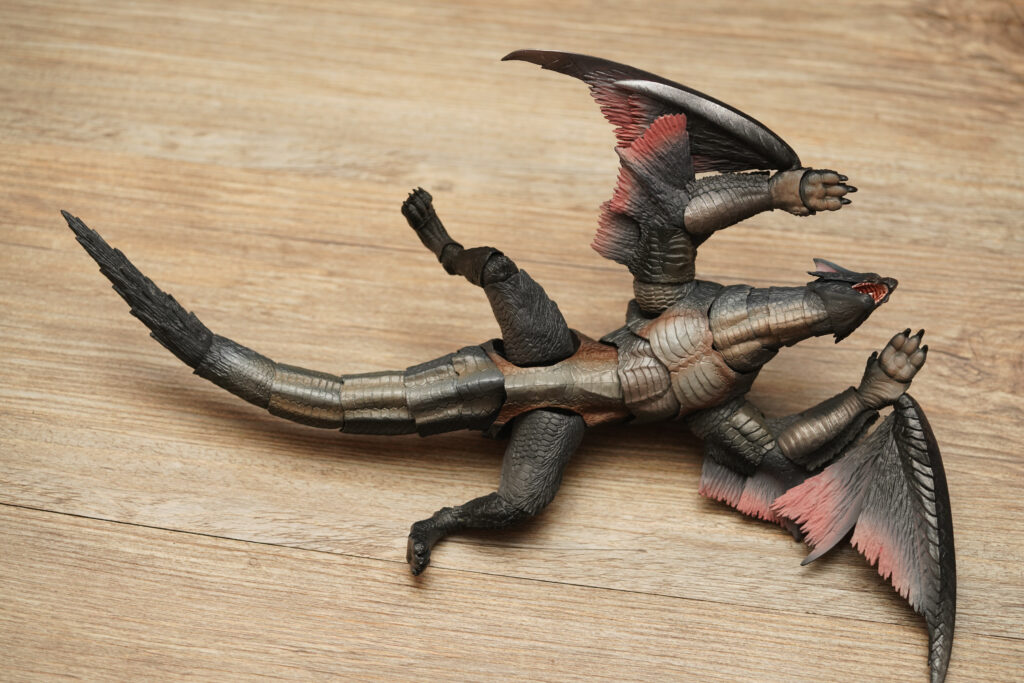 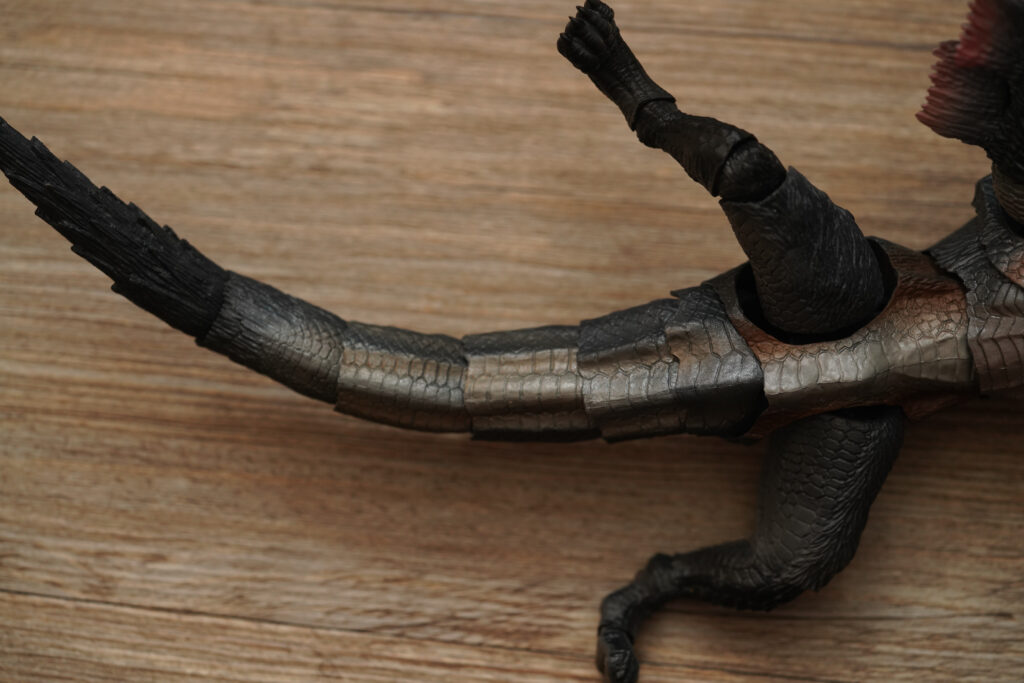 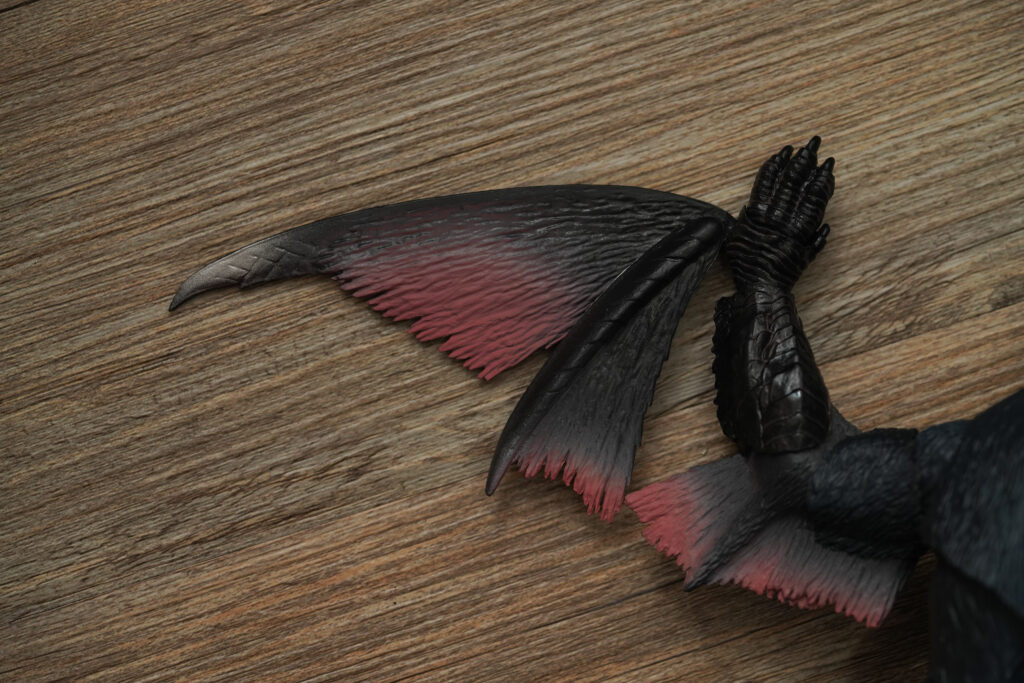 The tail can be interchanged to either the attack tail and the severed tail as if the hunter cut it off. 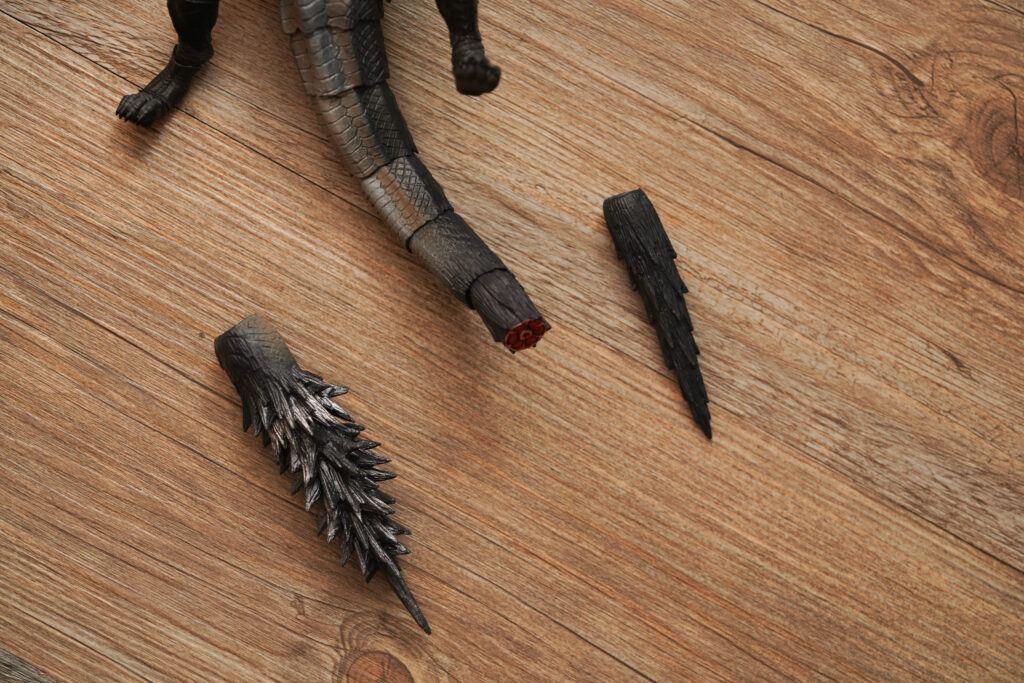 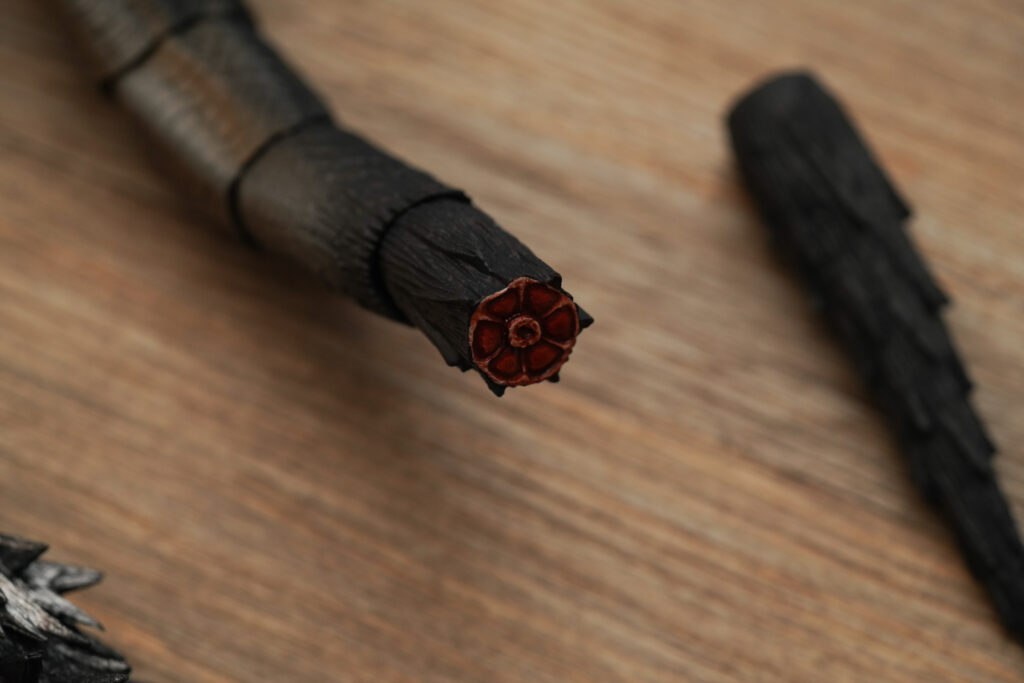 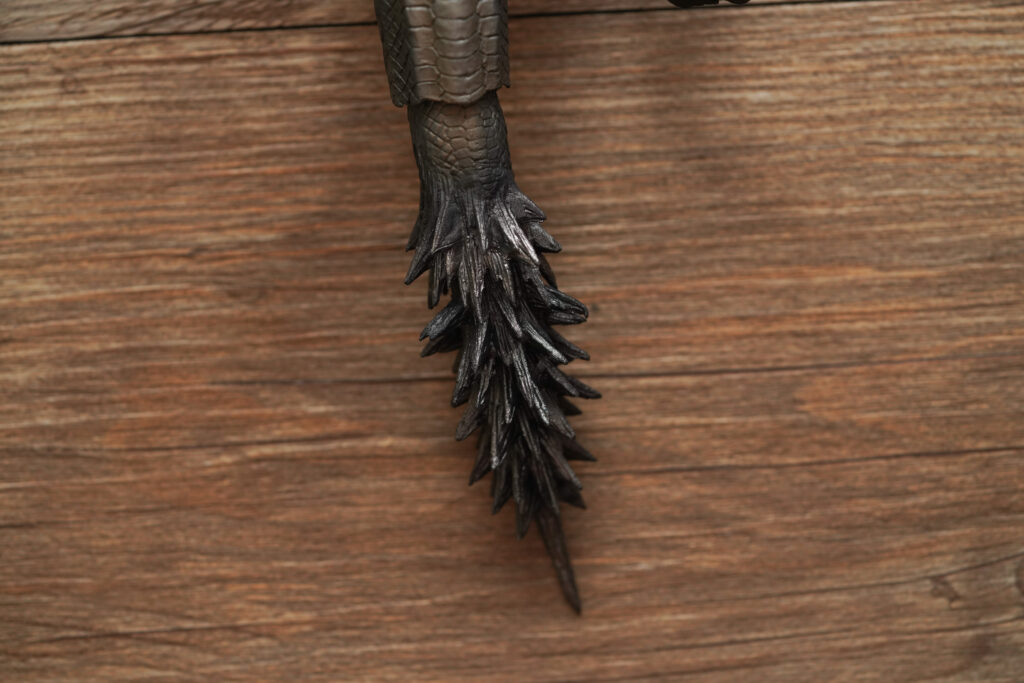 The only qualm I could think of would be that I wished they’ve added color details to the hunter figurine too. The figurine is plainly painted red and it looks like a part of a Monopoly game to me – but this is a very minor issue. Again, when it comes to the textures, they’ve added some in the figurine even if it was small in size. 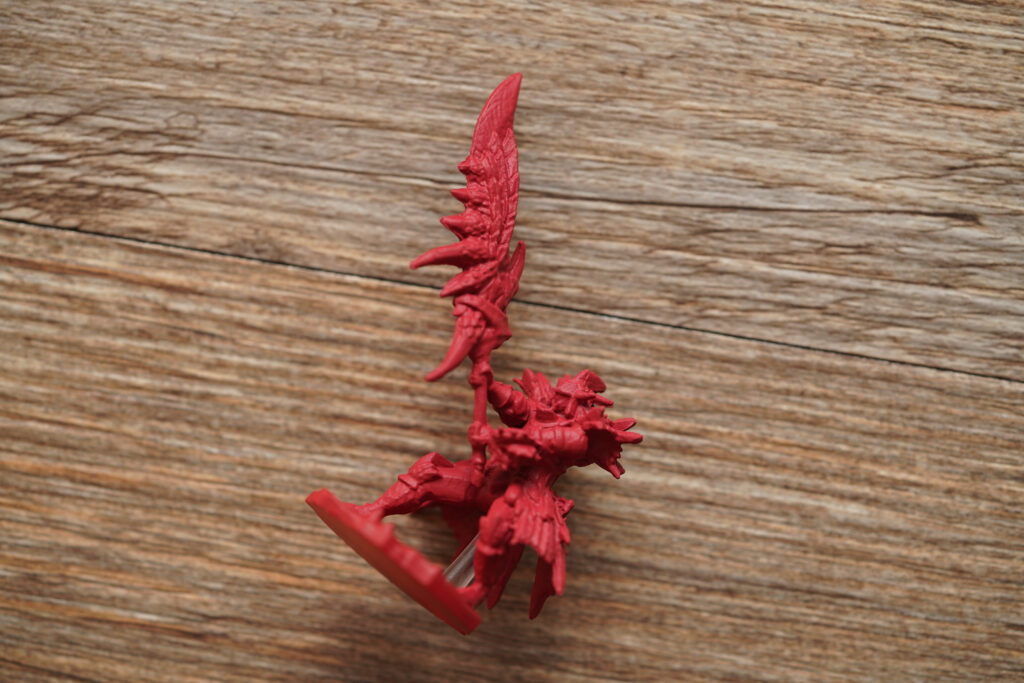 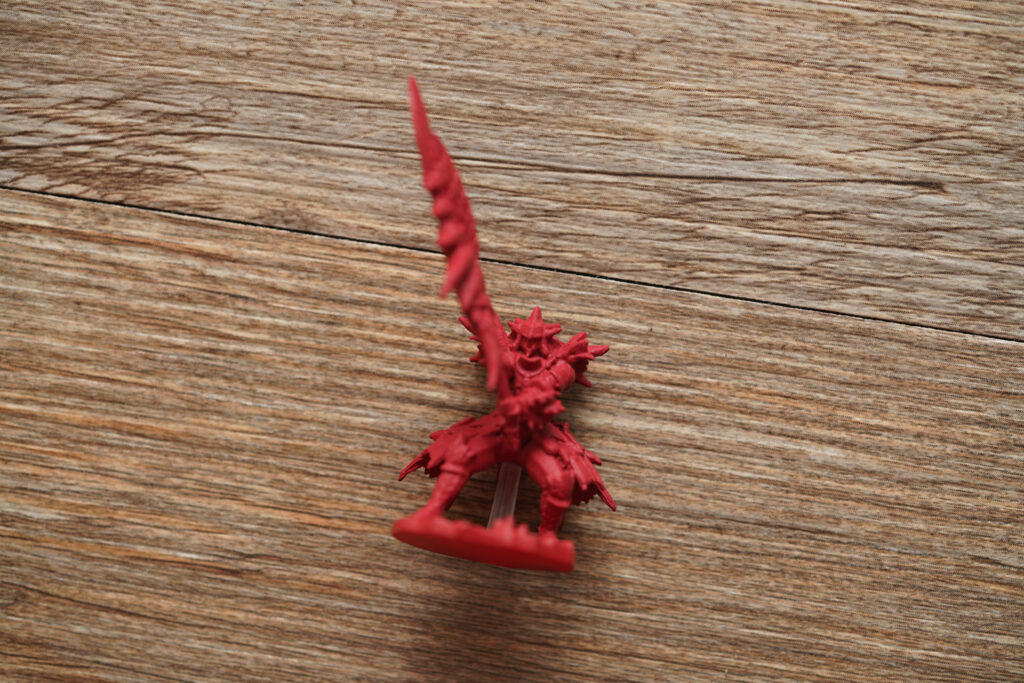 If you’re into the Monster Hunter series game, then this could be a definite figure for you to consider purchasing. It would look very good as a centerpiece near your gaming console!

Here are some menacing shots I took of the Nargacuga figure! 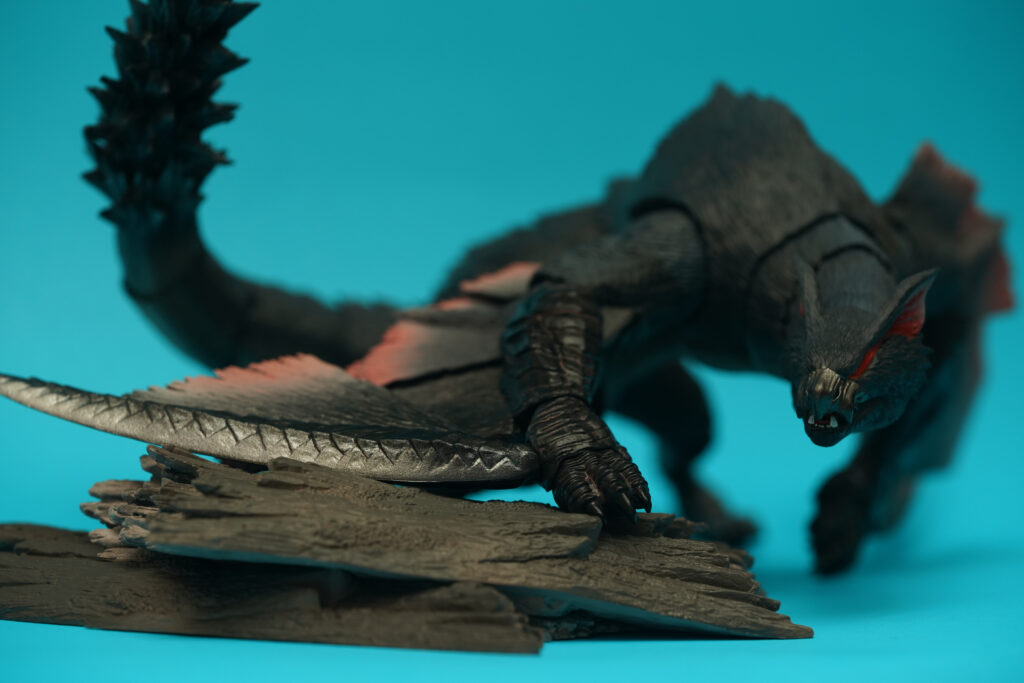 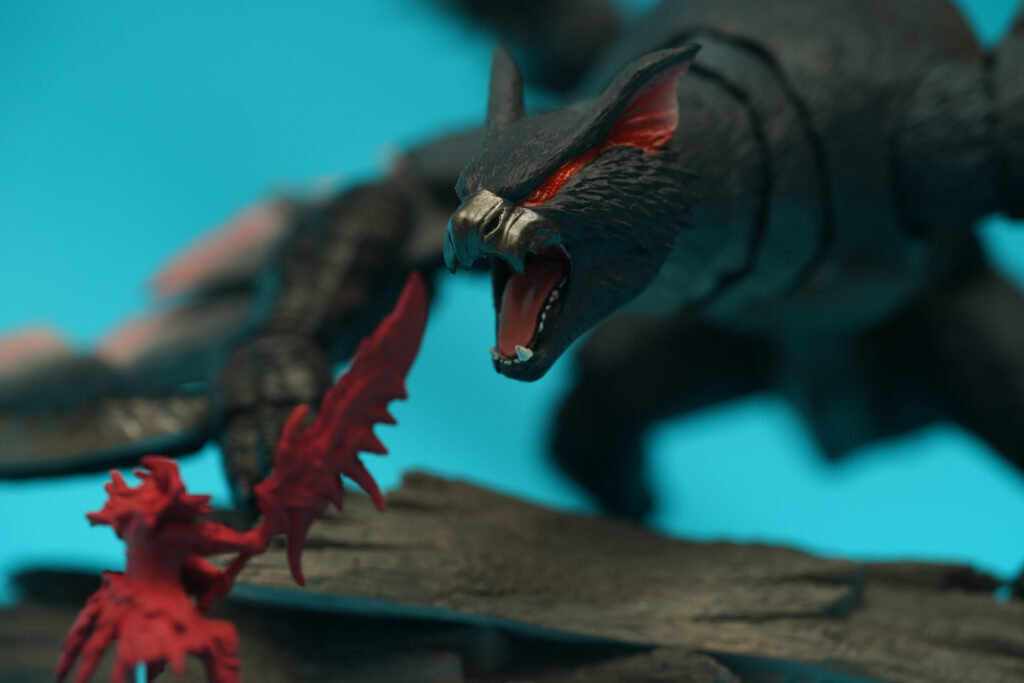 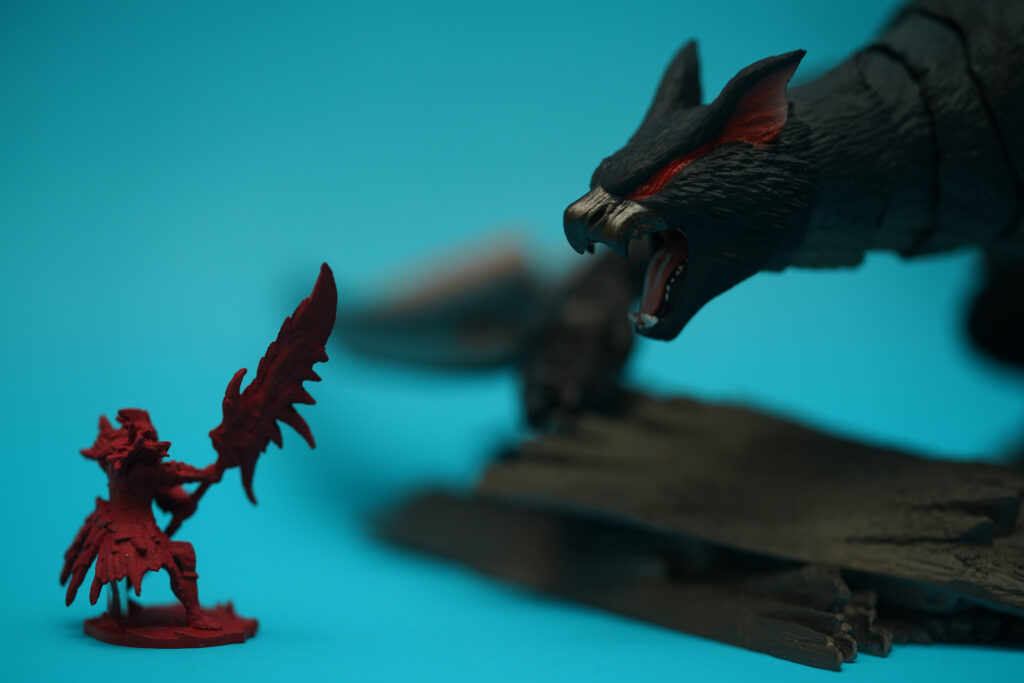 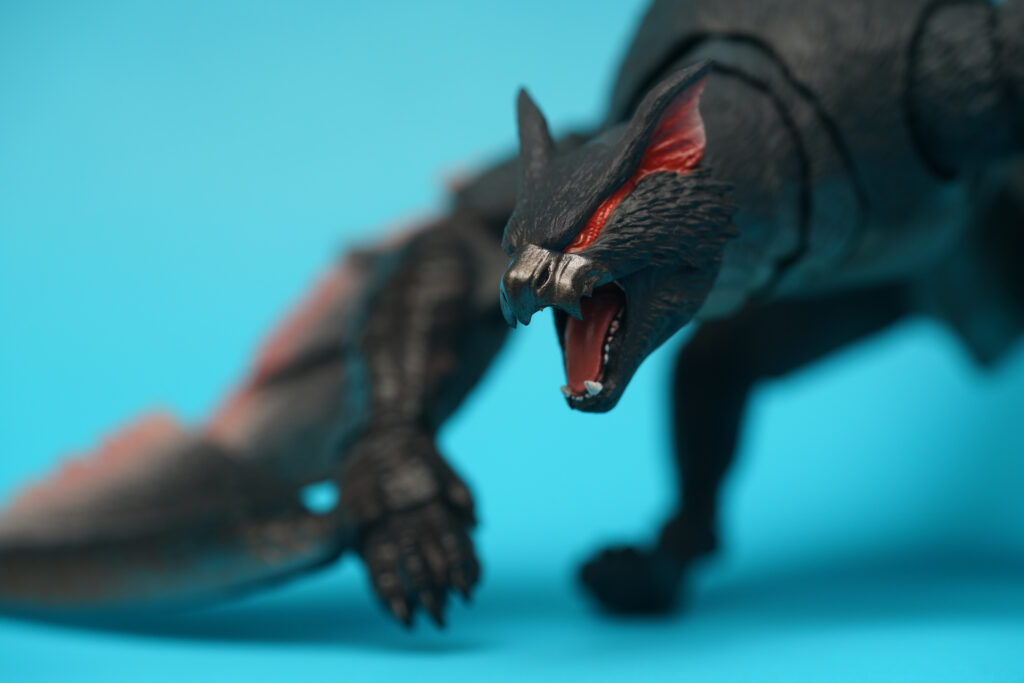 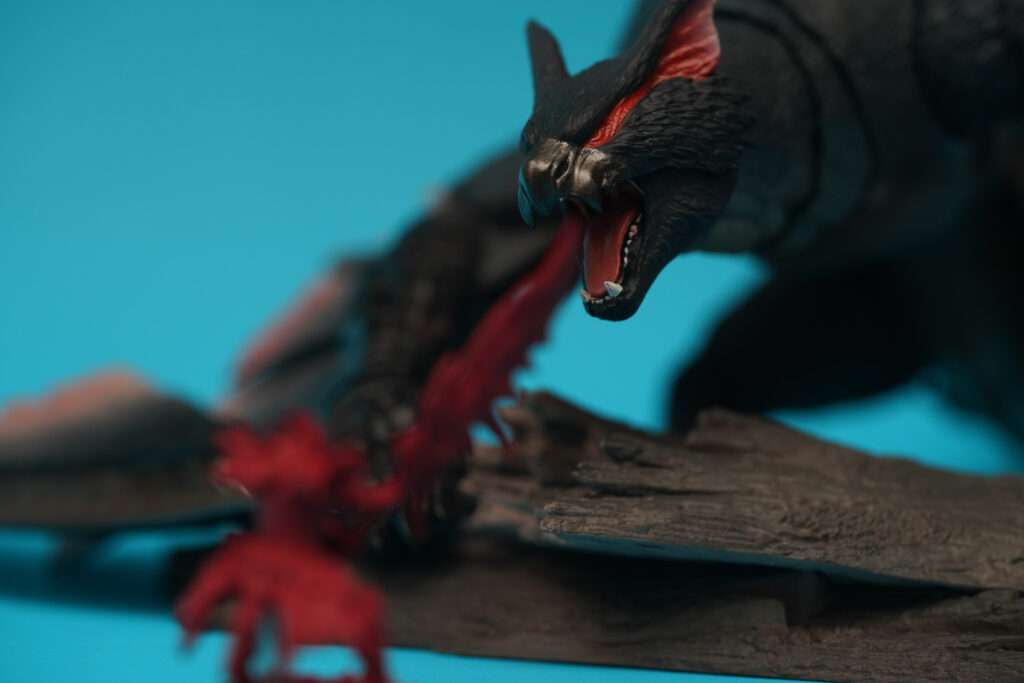 You may want to check out GreatToys Online. They’ve recently launched a new website and I promise you that you won’t leave the site without considering getting some figures for yourself!