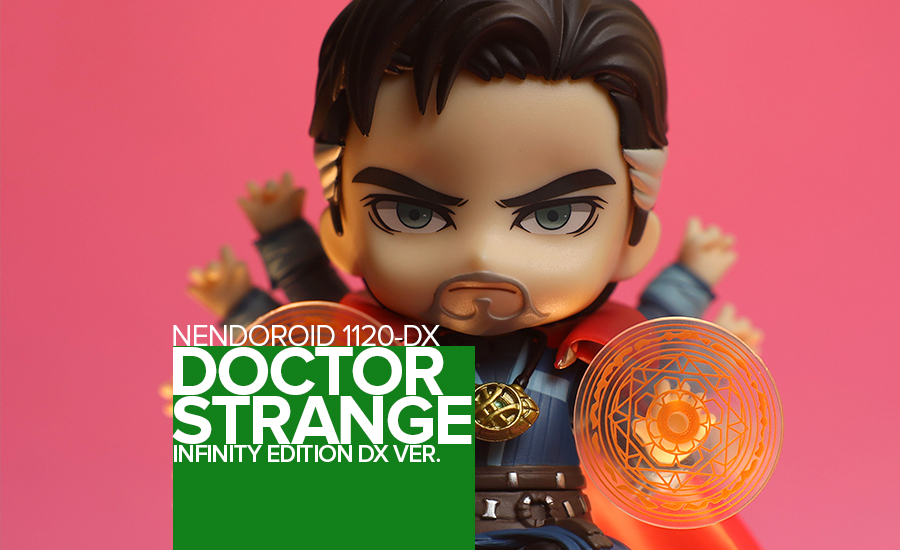 We last saw Doctor Strange in the latest Spider-man film and we’ll see more of his greatness this coming May! Doctor Strange is my first Nendoroid figure from the Marvel franchise. I am still waiting for The Good Smile Company to release a Wanda Maximoff/Scarlet Witch figure – that would be my next purchase if ever.

Since Doctor Strange in the Multiverse of Madness is just around the corner, I’ll be doing a review of the Doctor Strange figure from the Infinity War. Compared to other Marvel superheroes, Doctor Strange’s costume hasn’t changed much. Although from the recent trailers we’re seeing a different color patch on his cape – probably we’ll get more figures soon?

The box design for most of the figures from the Infinity War series is the same. The main difference would be the box size which depends on what version of the figure you’re getting. 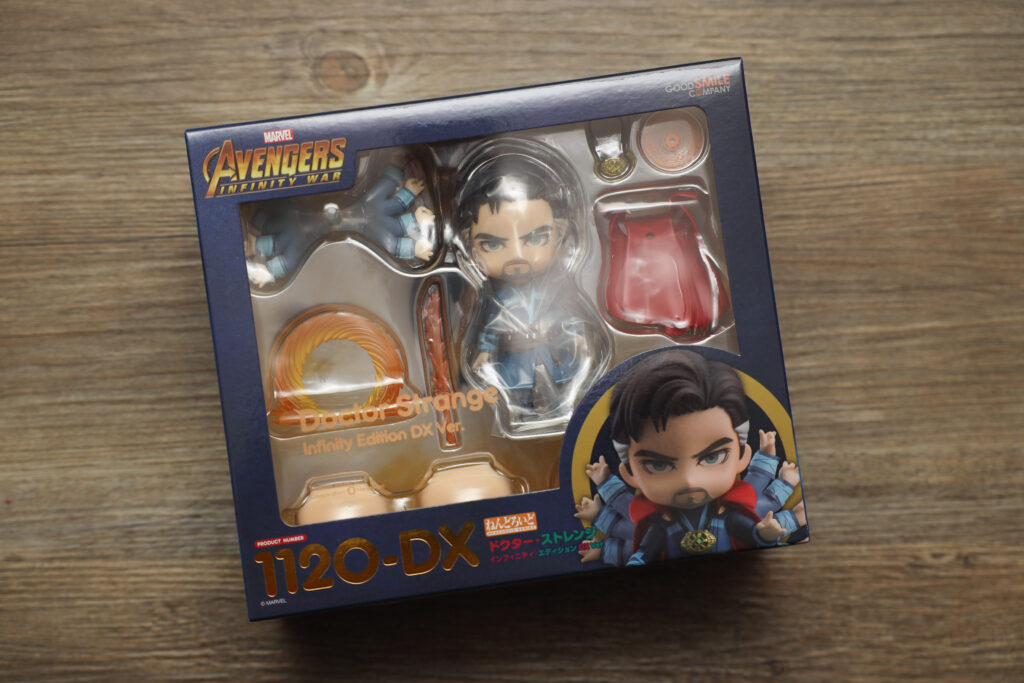 Make sure to check the authenticity seals of the boxes and avoid getting your figure from sketchy stores – always get the authentic one so you can get your money’s worth! 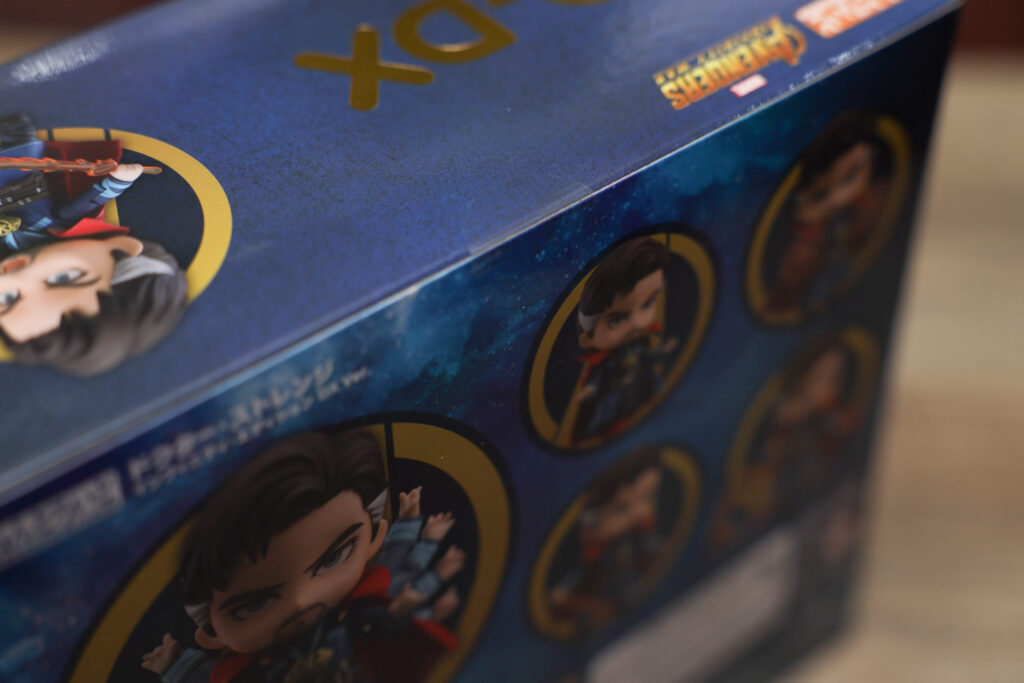 I’ve always had good feedback on most Nendoroid figures that I’ve reviewed so I’m pretty sure that this figure won’t disappoint. I’m happy that I got the DX version over the standard one mainly because I’m in it for the extra accessories. 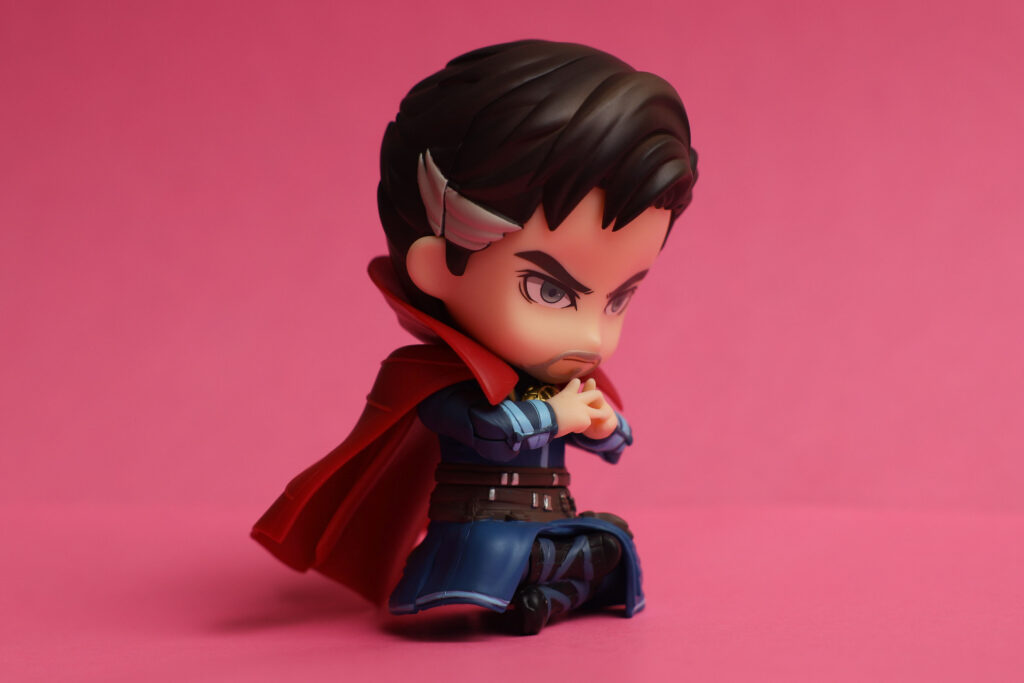 Although it’s doesn’t really look like Benedict Cumberbach, it still has the feel of the character and the actor portraying it – it sounds weird, I know! Now let’s go straight to the rest of this figure review.

Since this is the DX version, there are more accessories compared to the standard release. The exclusive accessories include the multiple arms part, the sitting legs, the mirror dimension effect, the magic gateway, and the sword. The standard accessories included in the set would be the faceplates, interchangeable hands, the figure base and stand, Eye of Agamotto, two sets of the Eldritch magic, and lastly, the cloak of levitation. 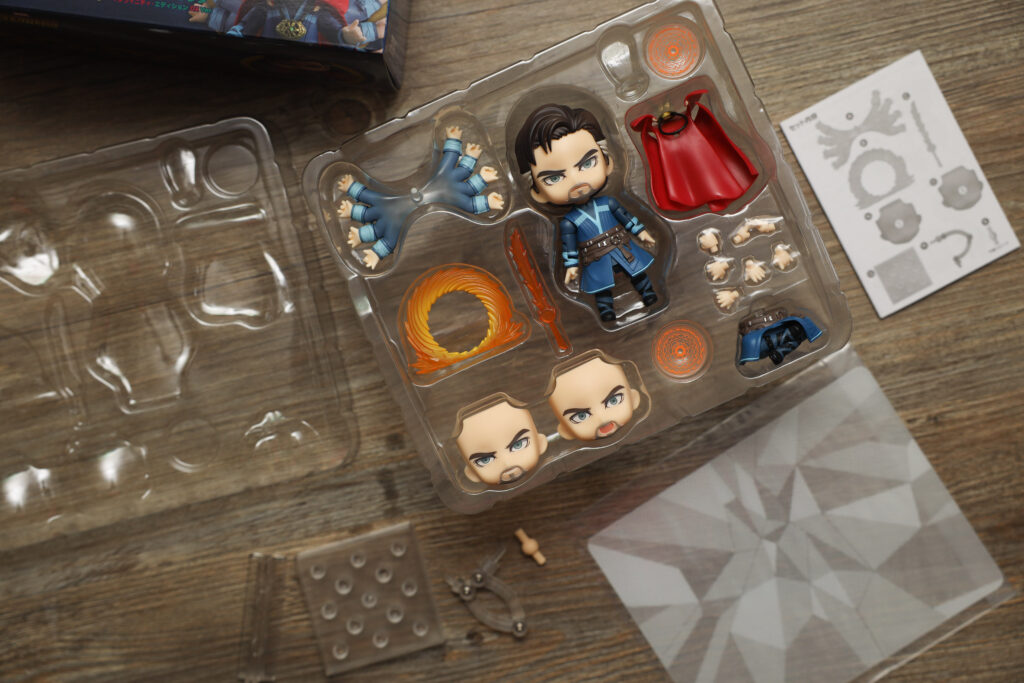 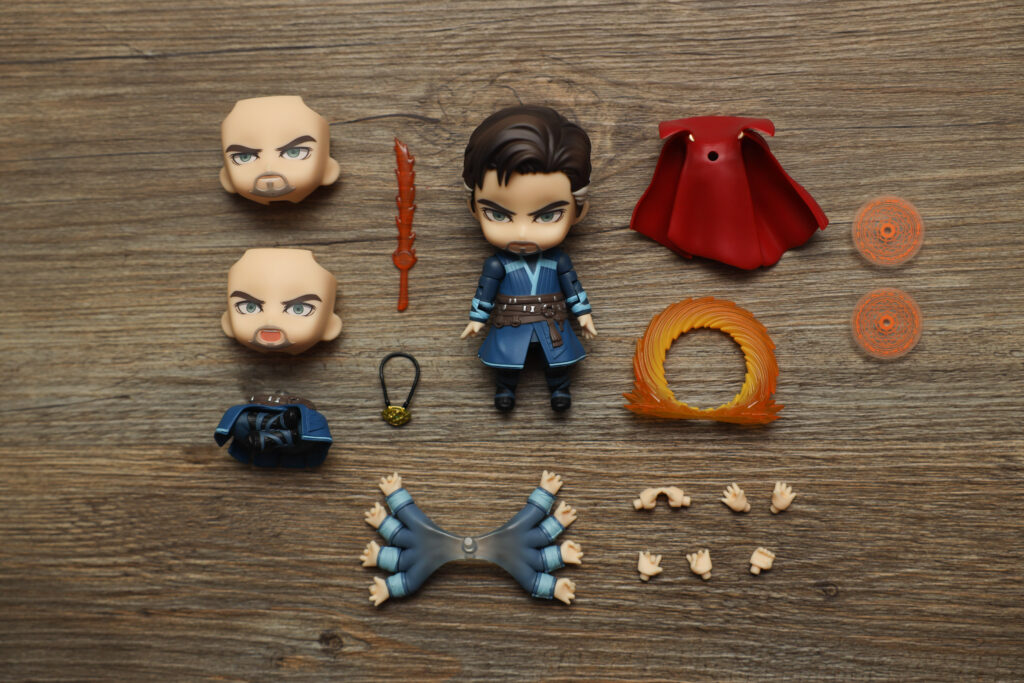 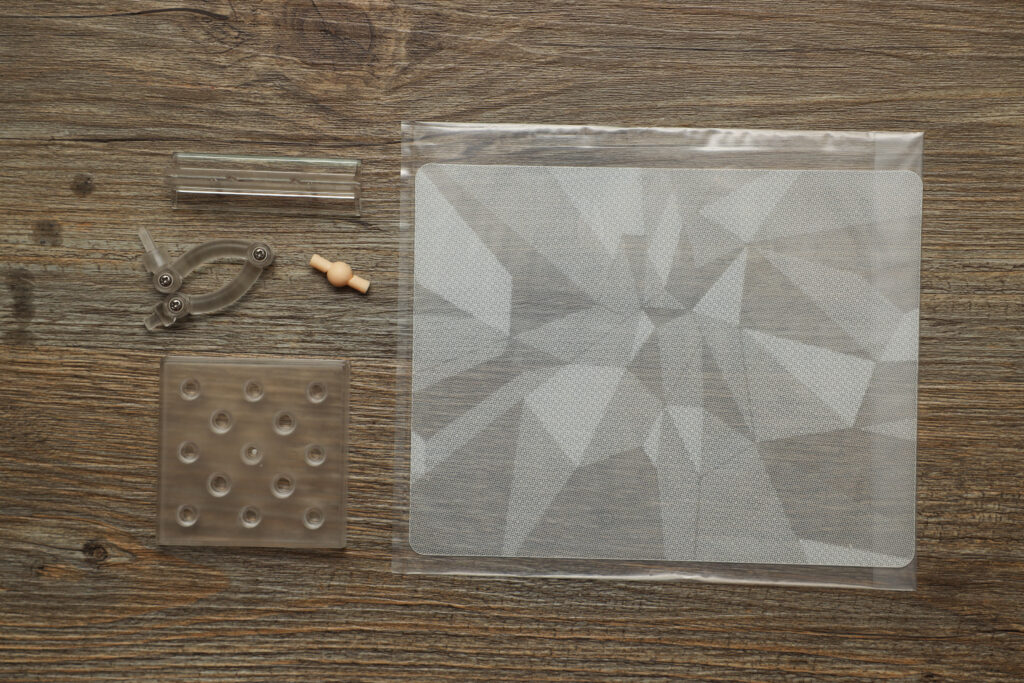 Since this is a superhero figure, the parts are made mostly out of the jointed parts while some of the interchangeable parts have the peg joints. 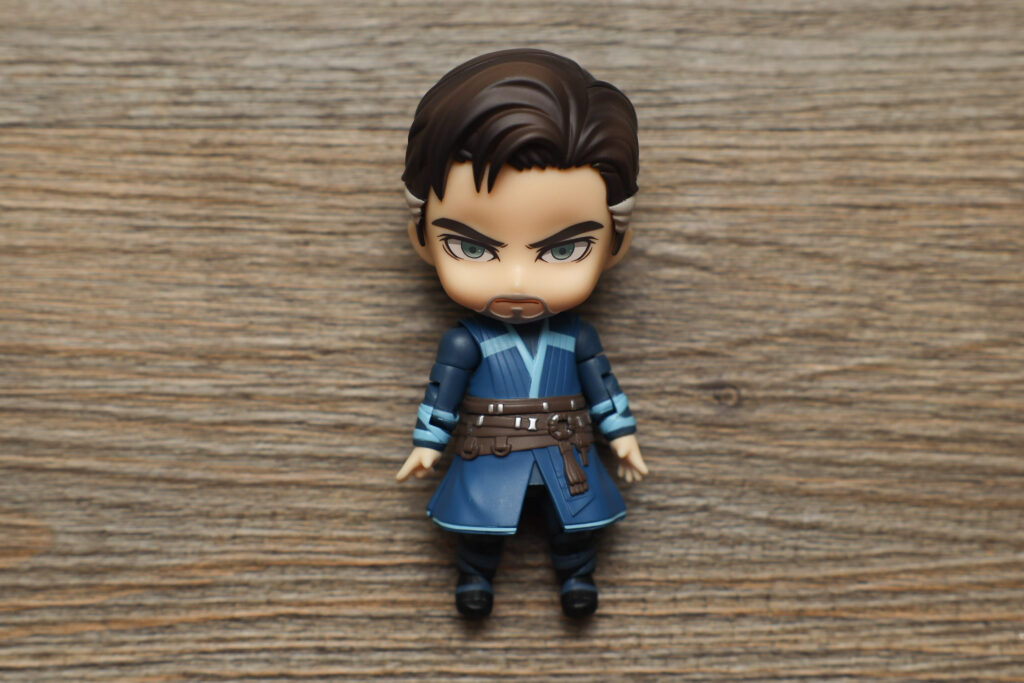 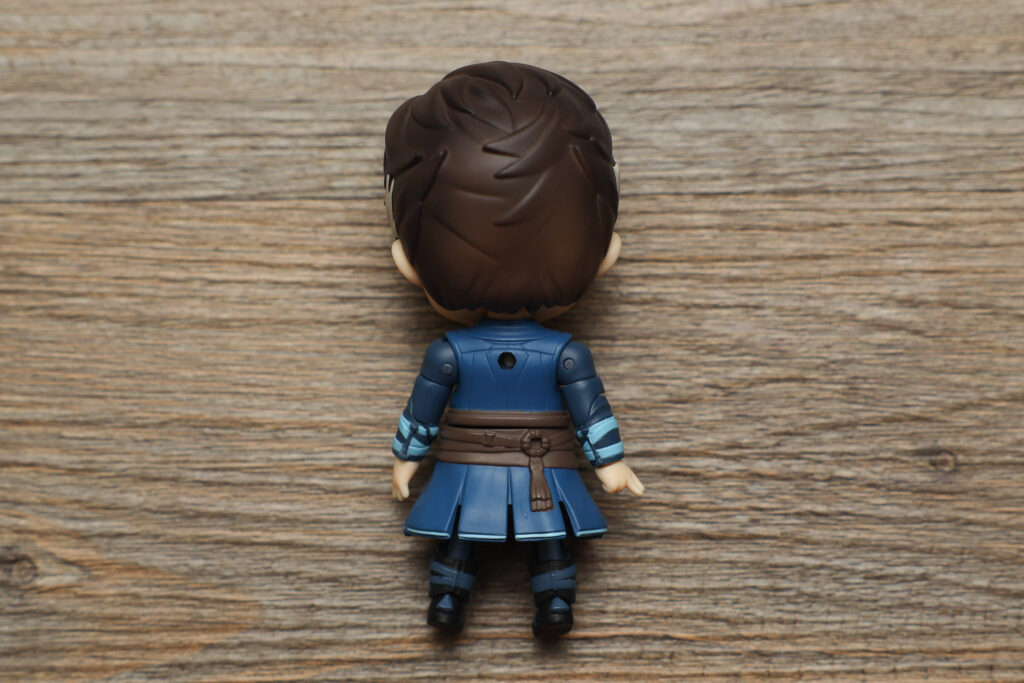 I’ve said it before and I’ll say it again, the number of details put into each Nendoroid figure is super intricate. There are noticeable textures and groves on the figure’s suit which adds to the overall look. 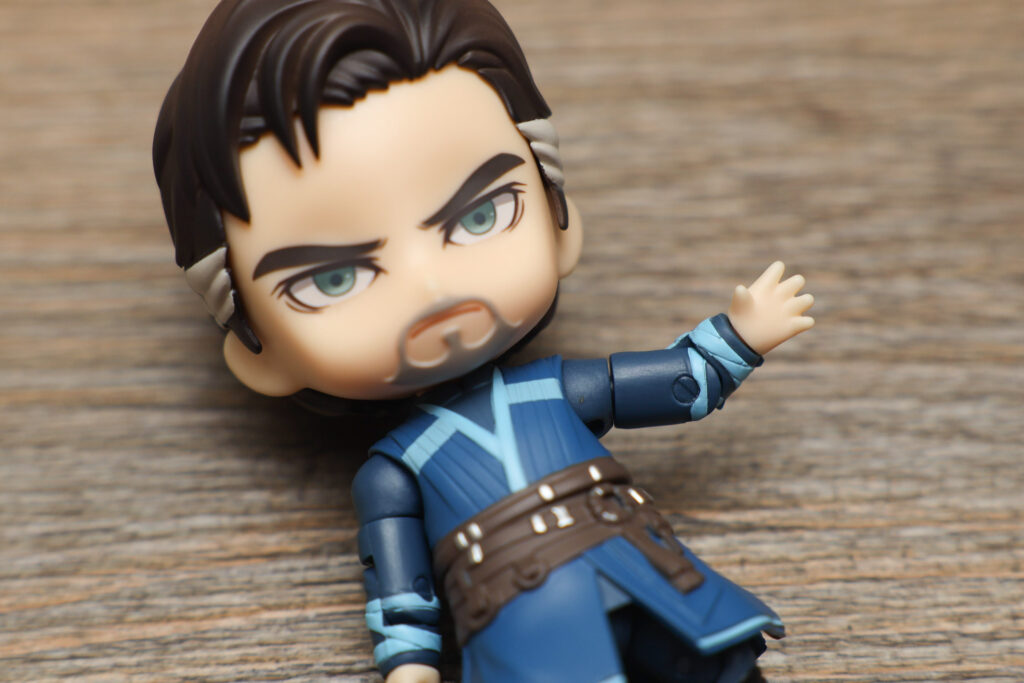 I also liked the two-tone color of the hair – it’s cool and very character accurate. 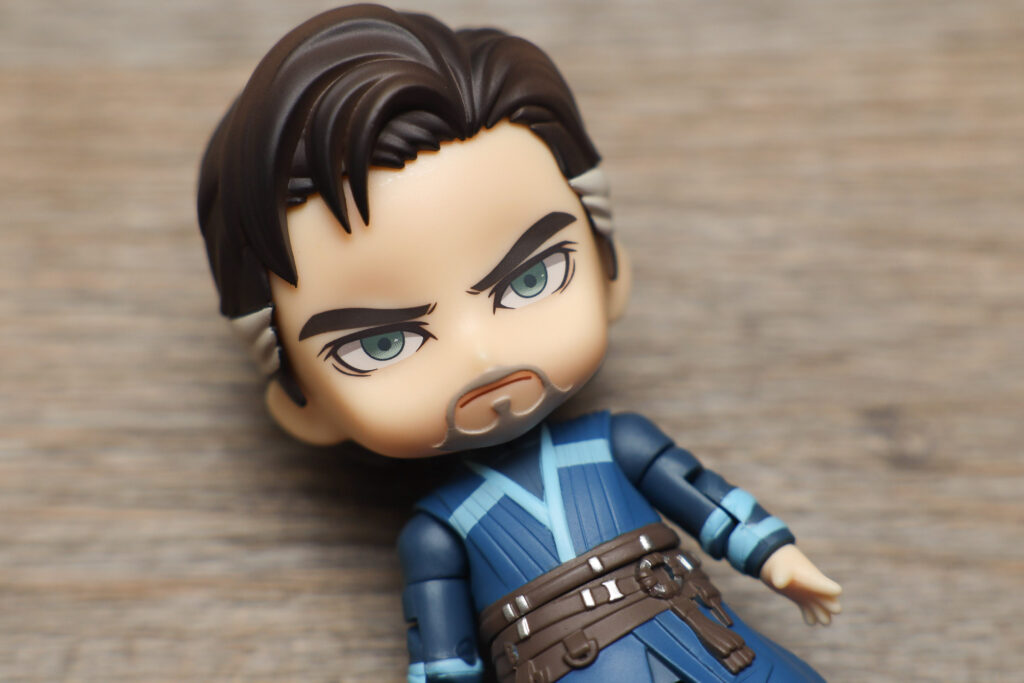 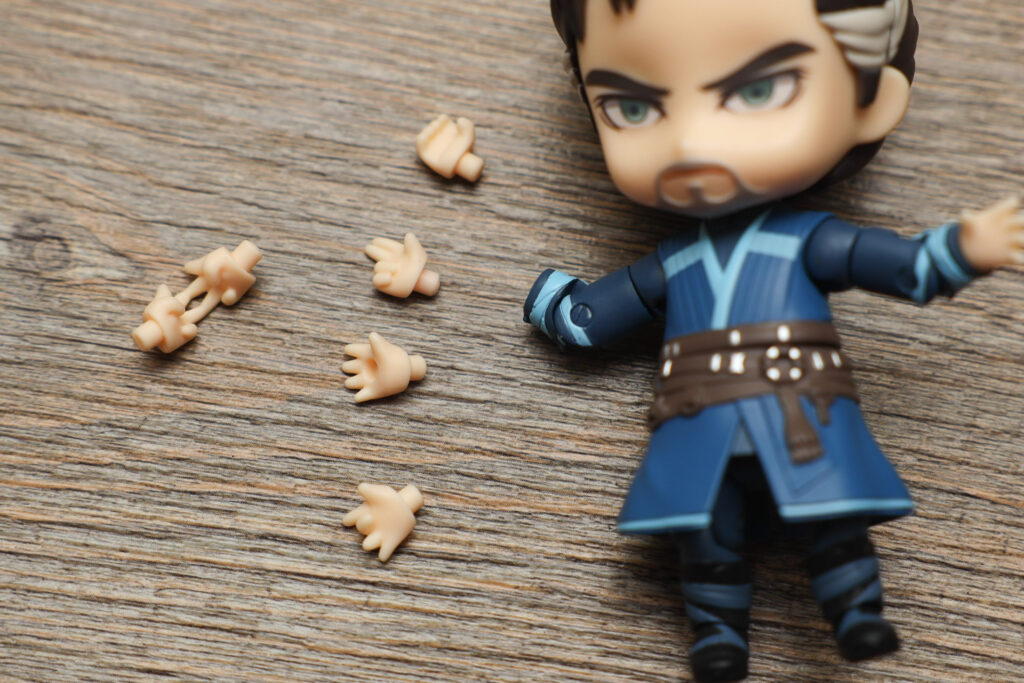 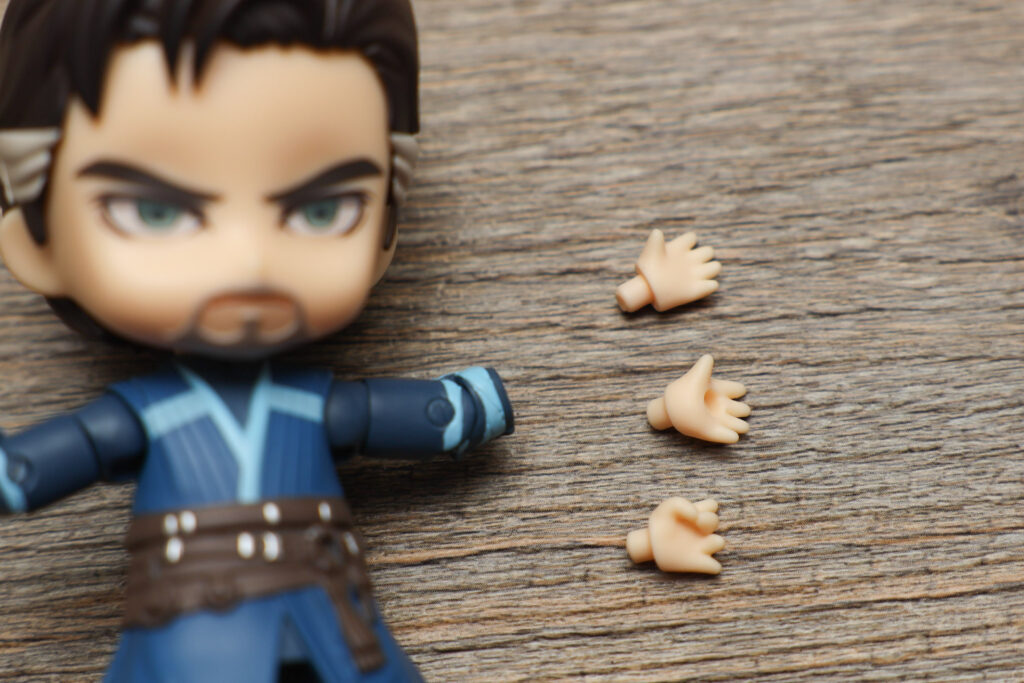 The bottom part is connected via peg and there’s also a small arrow guide to help you identify the front from the backside. 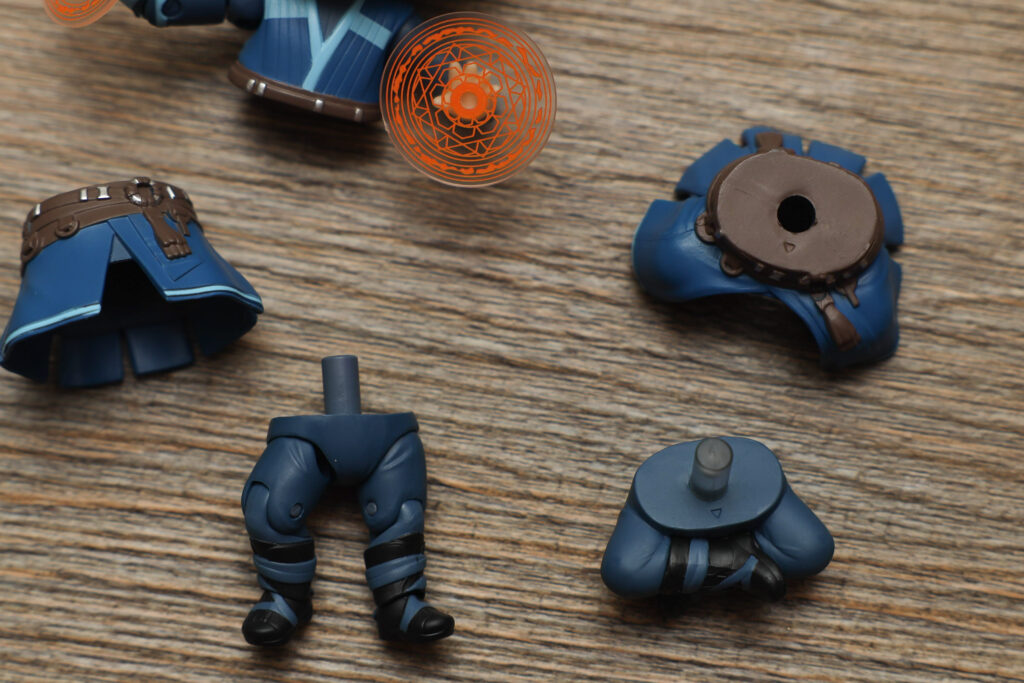 The cap also has some articulation points so you can move it based on whichever pose you want to do with the figure. I also liked that they’ve made it loop around the head from the body so it won’t detach very easily – this was the problem I had with my Superman and Armored Batman Nendoroid figures because those were connected via peg joints at the back. 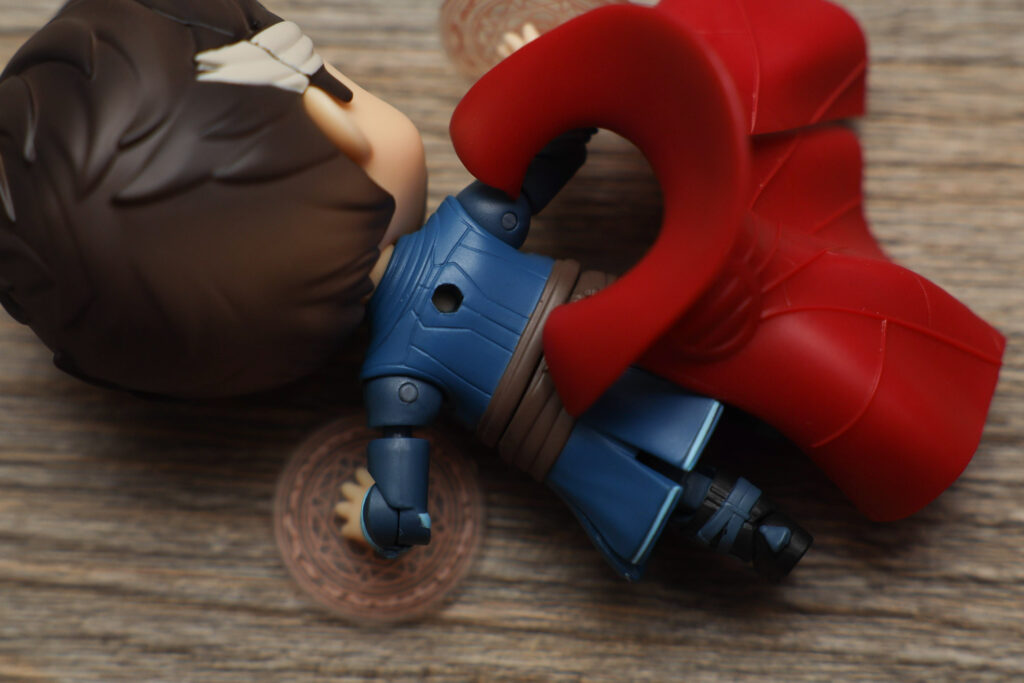 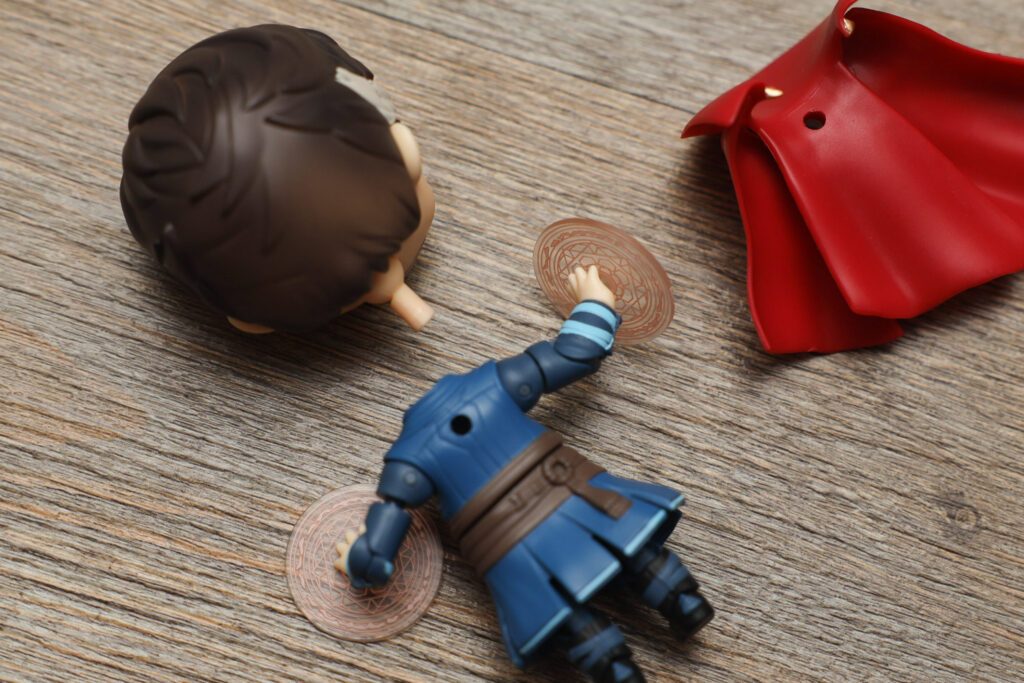 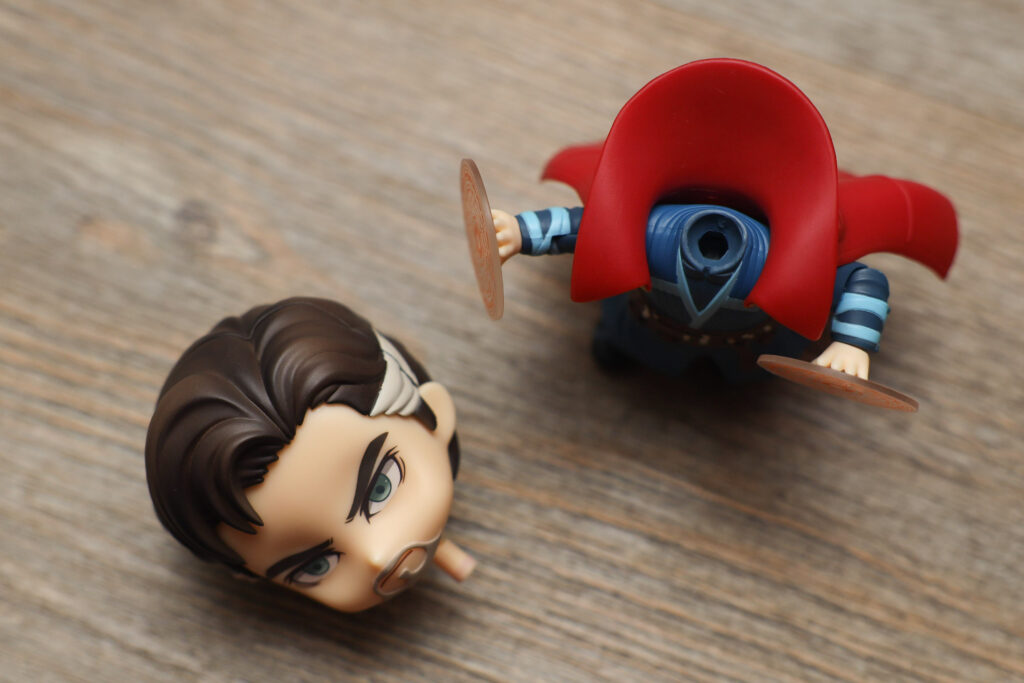 The faceplates also have good paint details to them especially if you’re looking at its eyes – although the other faceplate differs slightly compared to the other one. The main difference would be from the mouth as it has a slight opening. 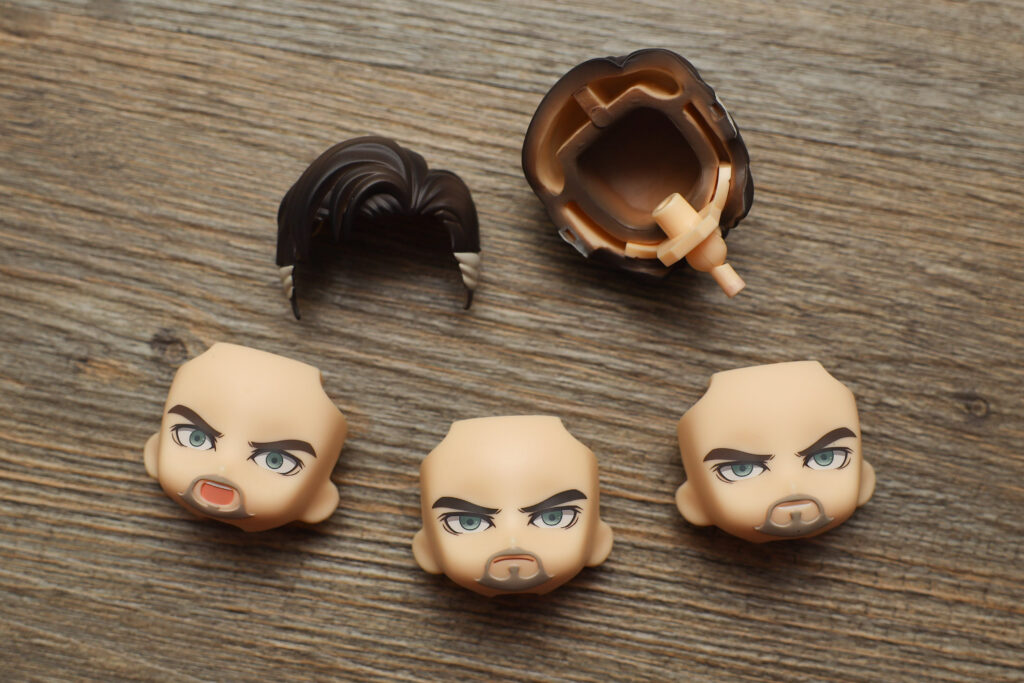 The Eldritch magic effect also has small pegs to it so you can attach it with the interchangeable hands with a peg void on it. 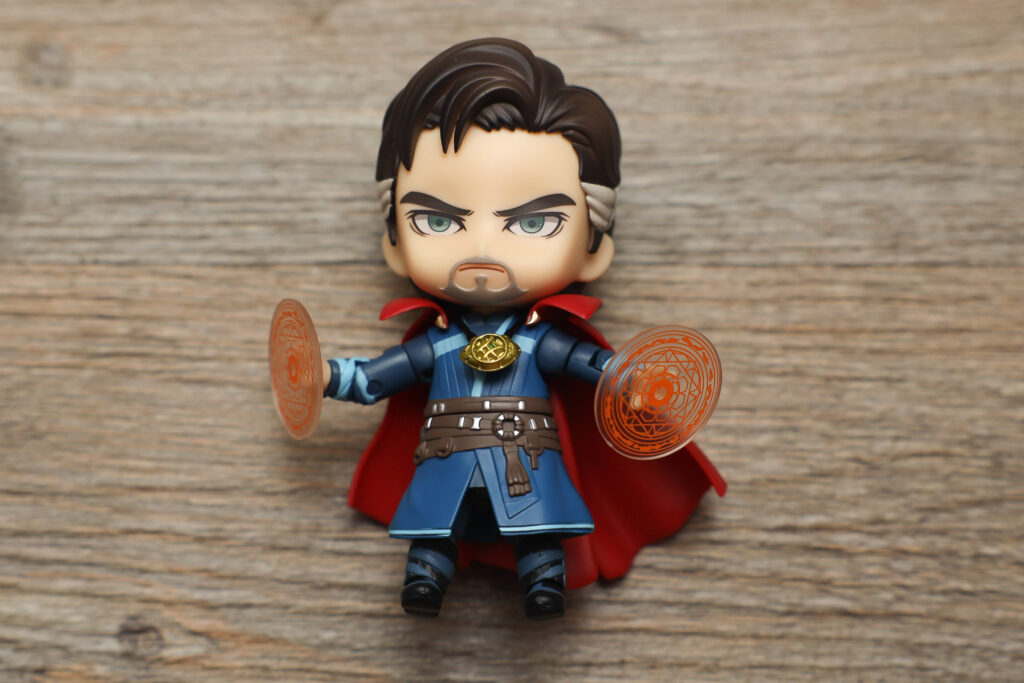 When it comes to collecting the Marvel Nendoroid line, you have to be very wise as there’s already a ton of figures that were released. I would personally get all if I managed to start getting these from its release date as these are super recommended to have especially if you’re a fan of the Marvel Cinematic Universe.

Here are the complete Marvel figure releases for the Nendoroid line.

For now, I will wait for a Scarlet Witch figure to go with my Doctor Strange Nendoroid figure – probably I’ll also consider a Spider-man figure soon? We’ll see? 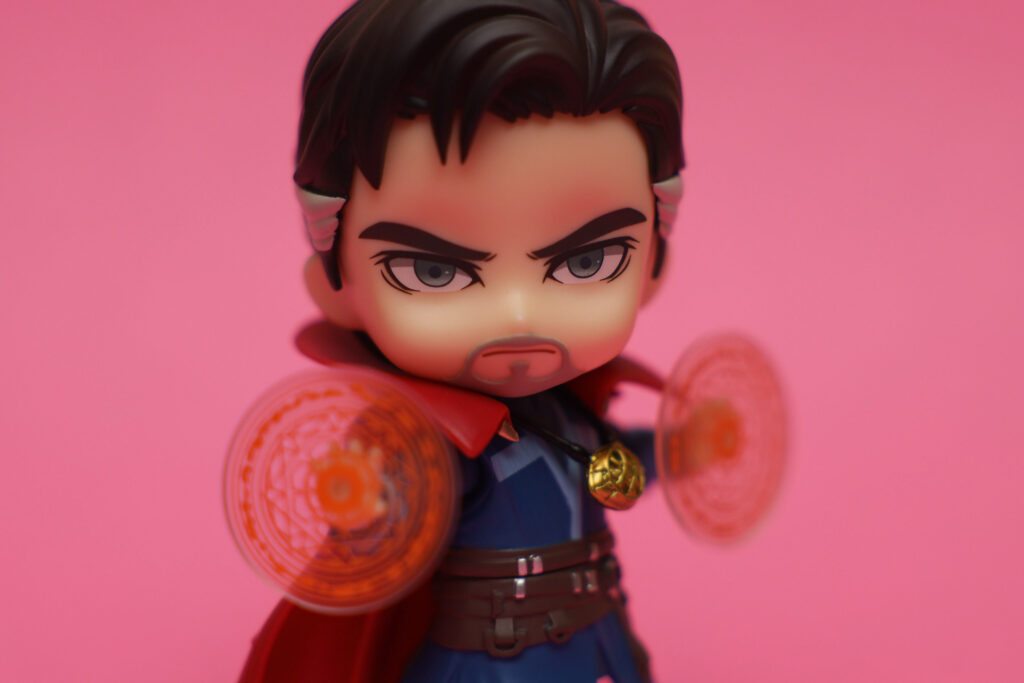 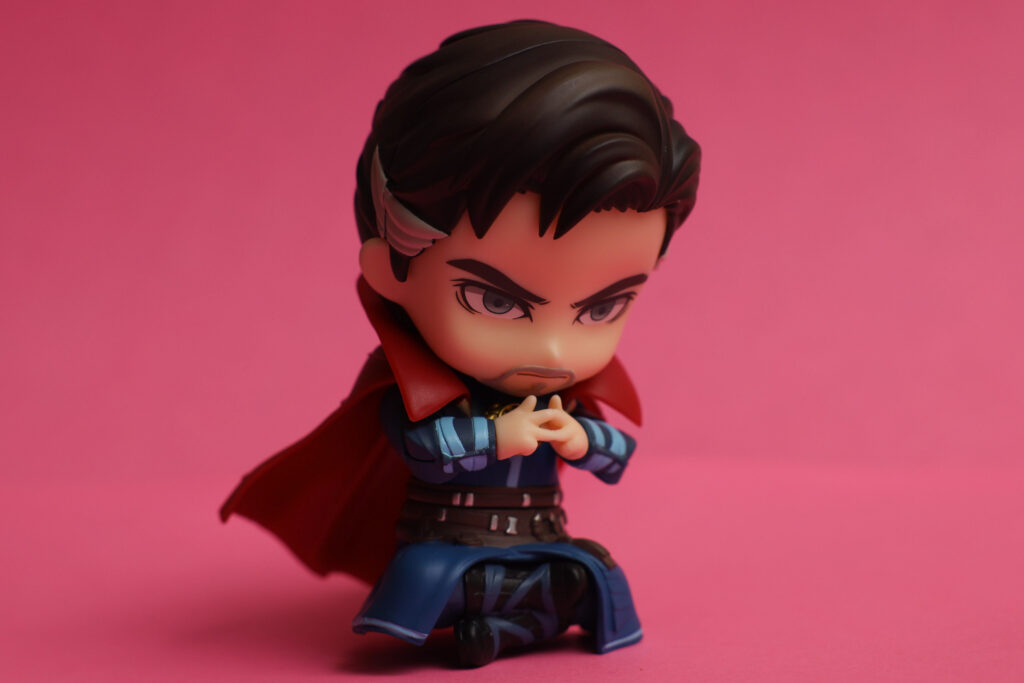 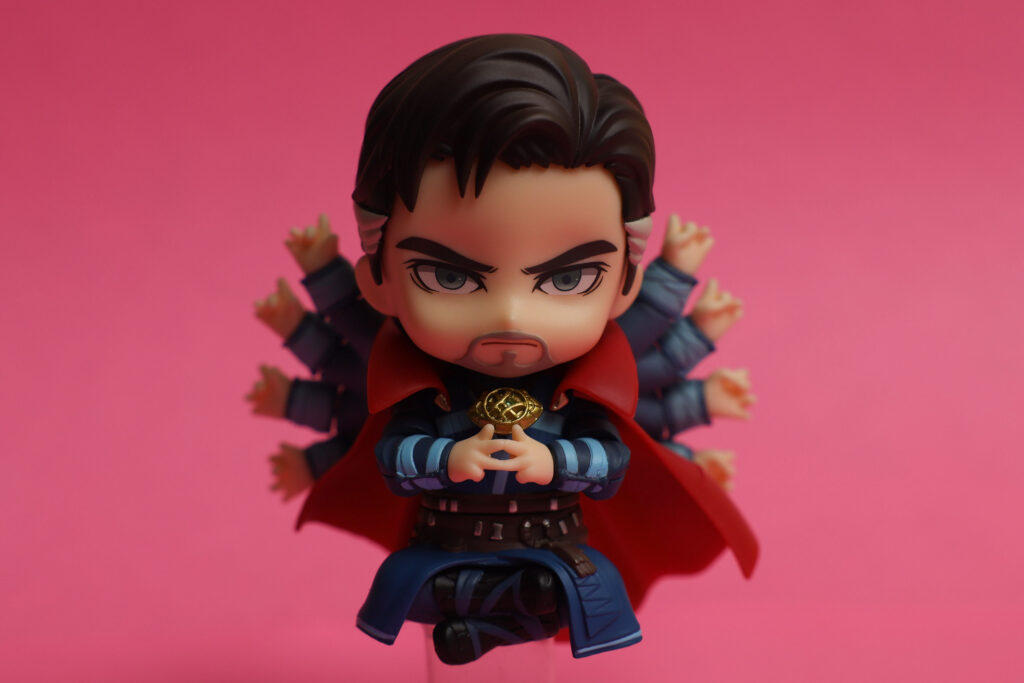 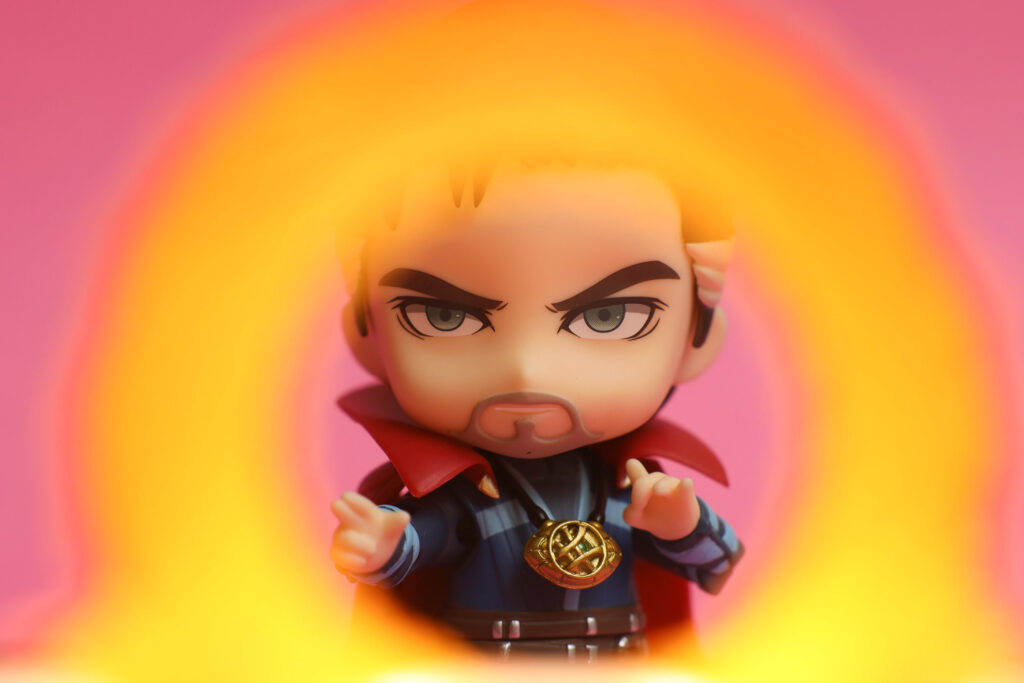 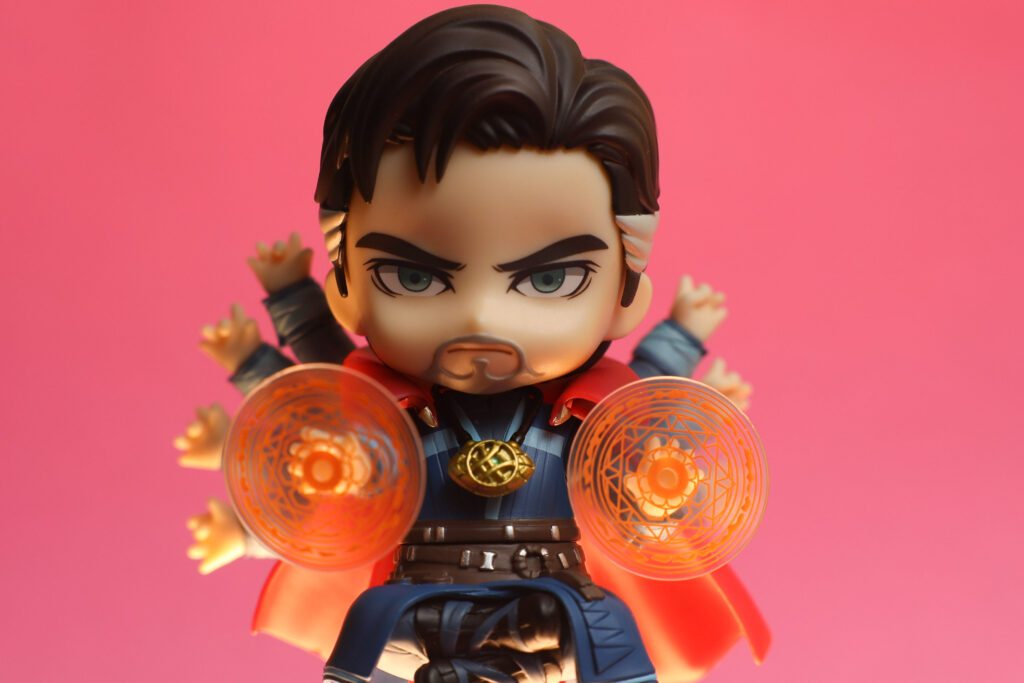 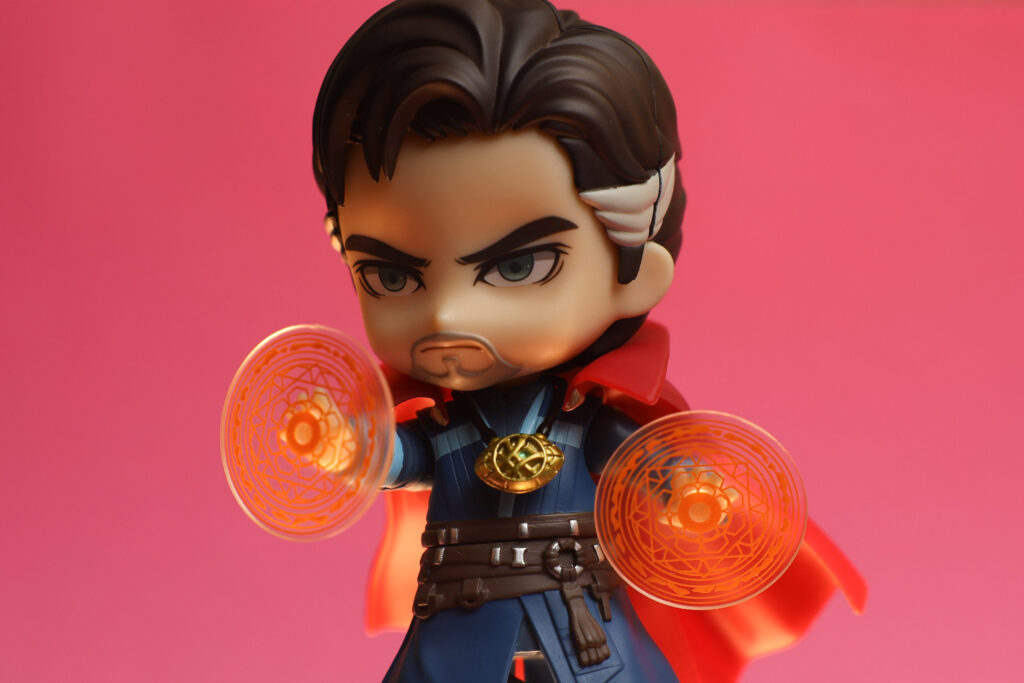 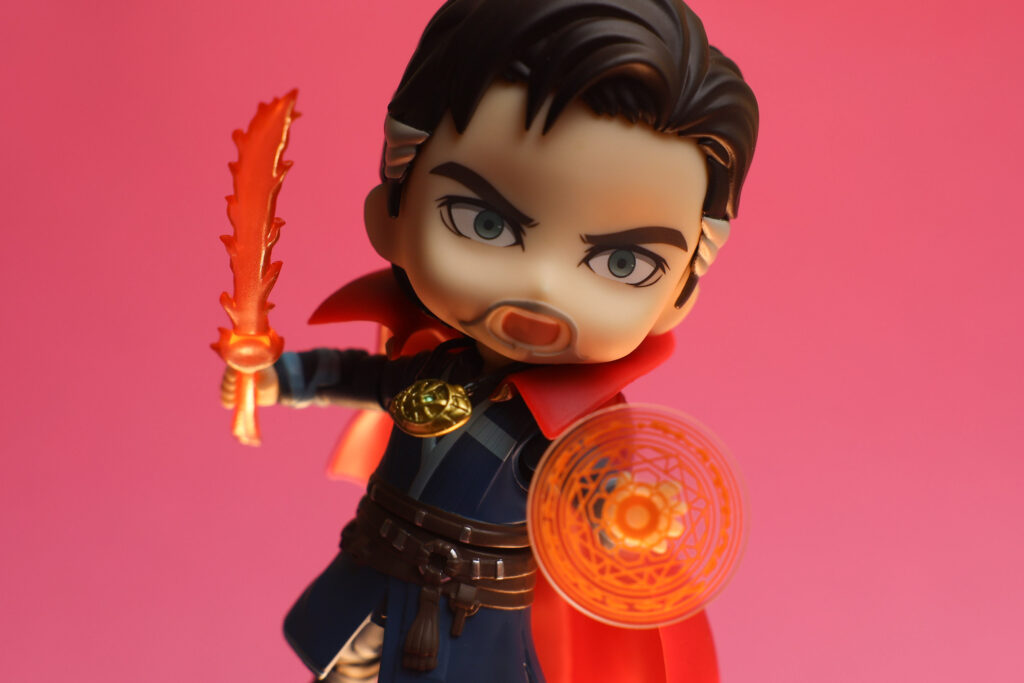