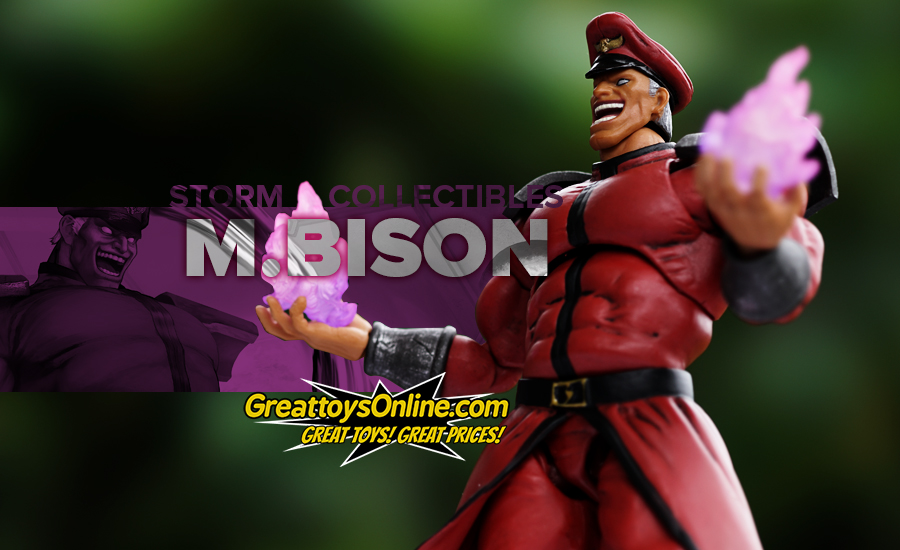 If you’ve read my toy review about the Storm Collectibles’ Ryu figure; I’m sure you’ll be interested in reading my review for the main Street Fighter V antagonist, General M. Bison.

Ever since I’ve played the Street Fighter game, I consider M. Bison to be one of the hardest one to beat since he’s mostly the last fighter that you’ll face in the game.

Today, I’ll be doing an unboxing review for the Storm Collectibles’ M.Bison figure. This review is brought to us by our friends from Greattoys Online.

Just like what I’ve said in my earlier review for the Ryu version of the figure, this figure stands slightly taller than the usual 1:12 scale figures – so you’ll notice that it is bigger than the S.H.Figuarts’ version of the Street Fighter figures. 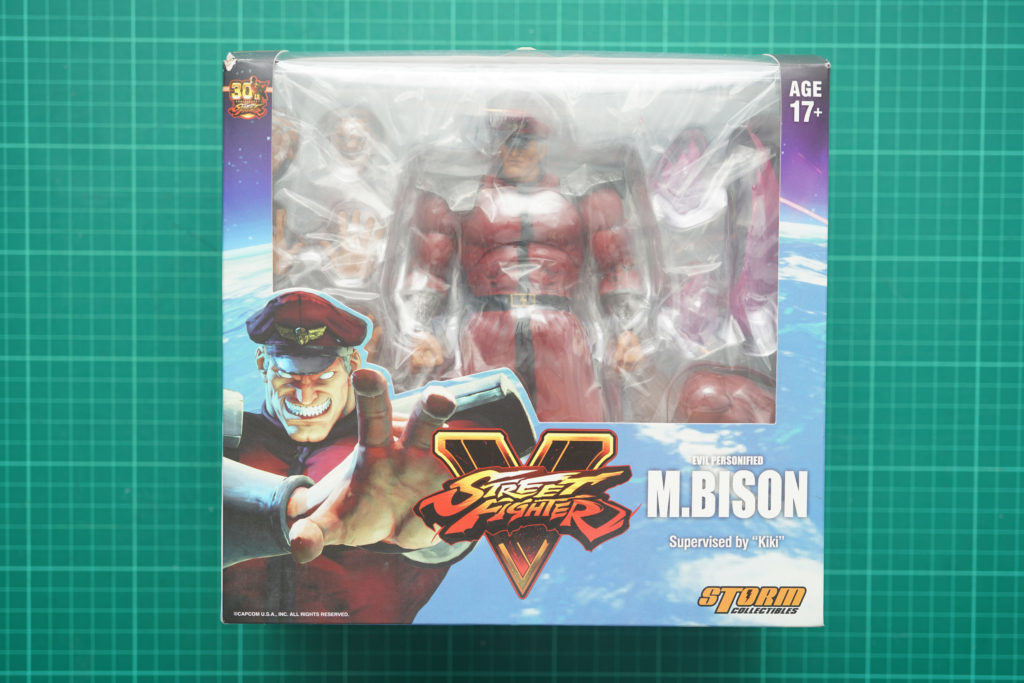 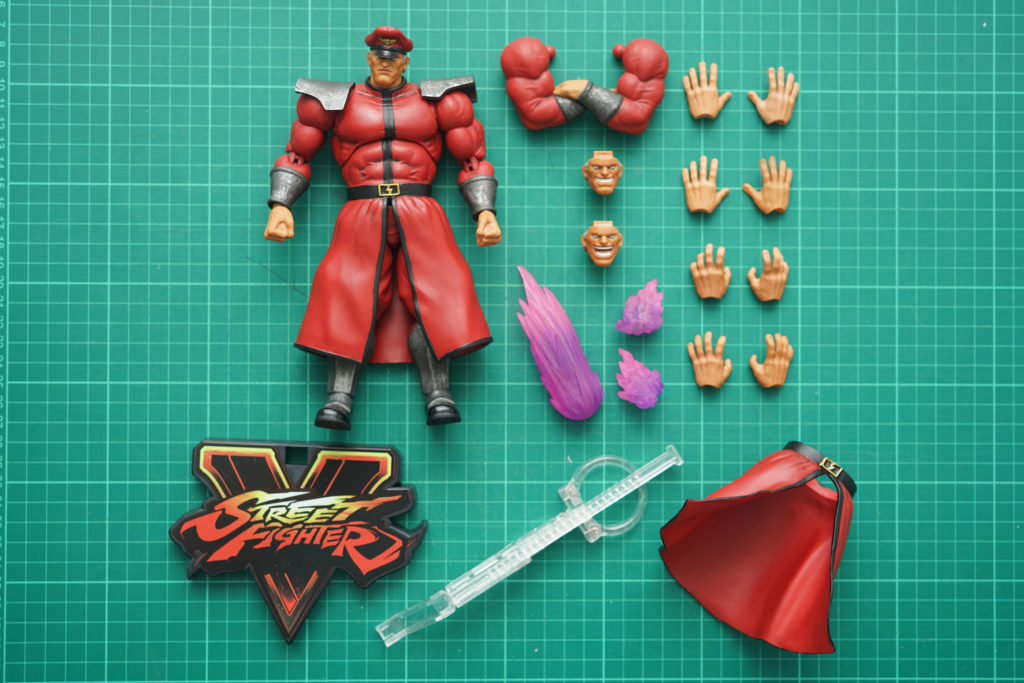 I really like the detailing of paint in this figure, I like how they applied depth in coloring the gray part of the suit. You’ll notice that it has details similar to that of a battle damage effect – you’ll see the brush stokes of the paint as well. 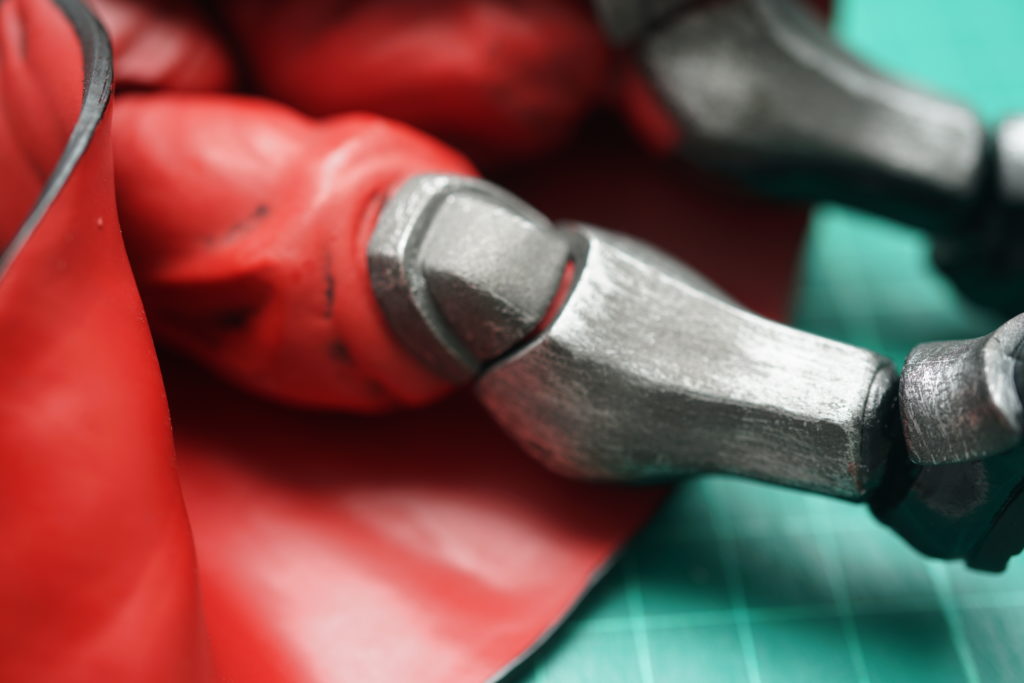 I have a few concern of the figure, I have the same concern which I raised in my Ryu figure review. I really don’t like how they’ve done the joints connectors for the upper part of the body to its lower part. You’ll clearly notice that it’s very bare and you can easily see the T-shape joints. 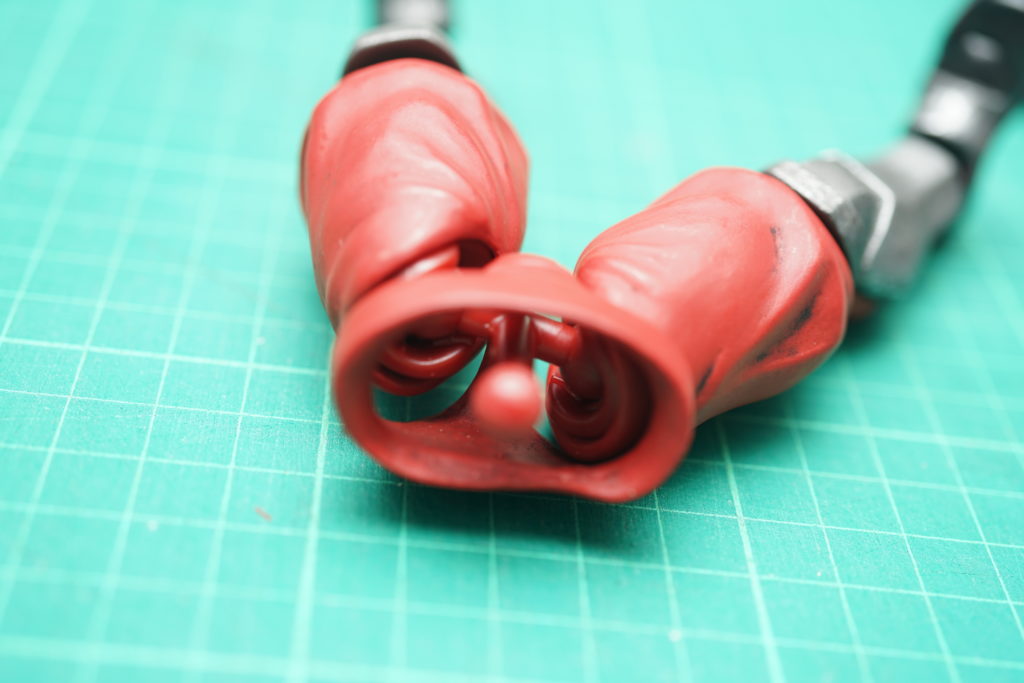 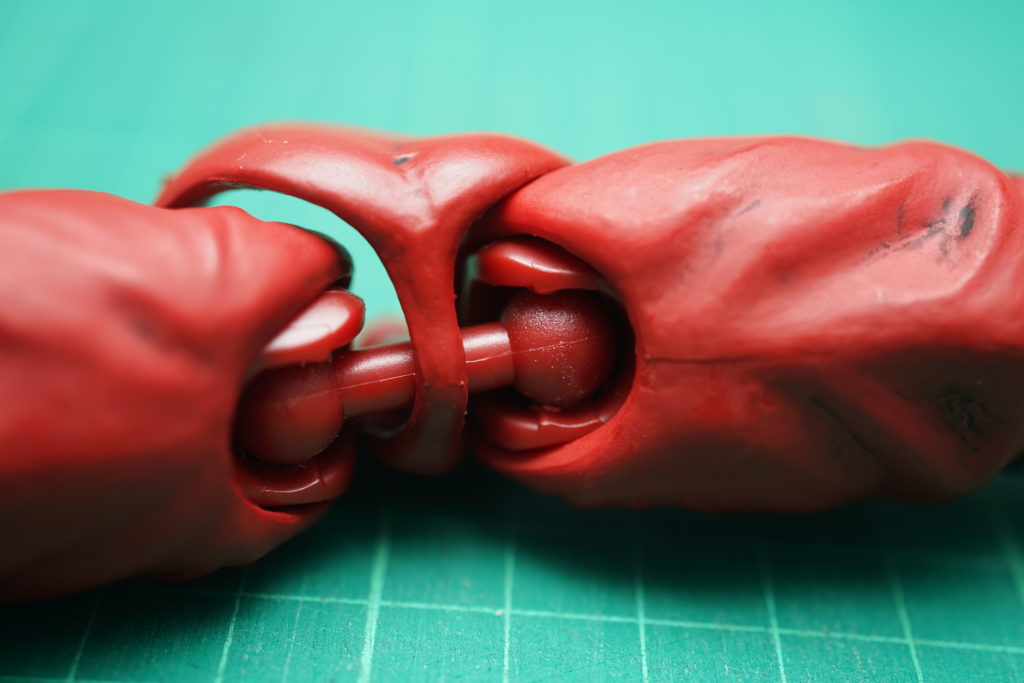 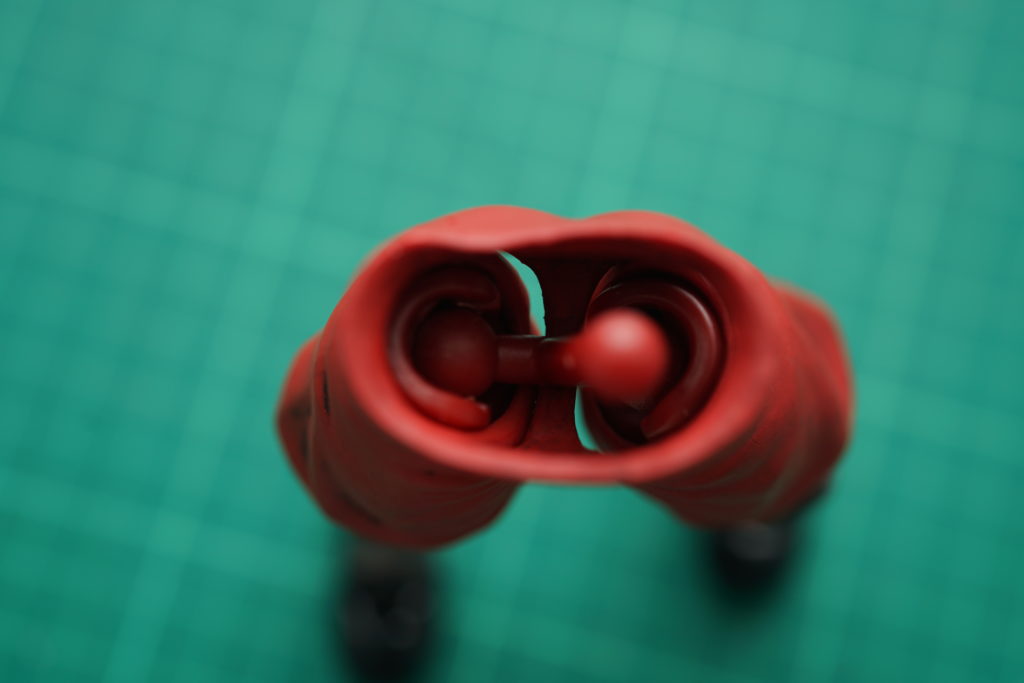 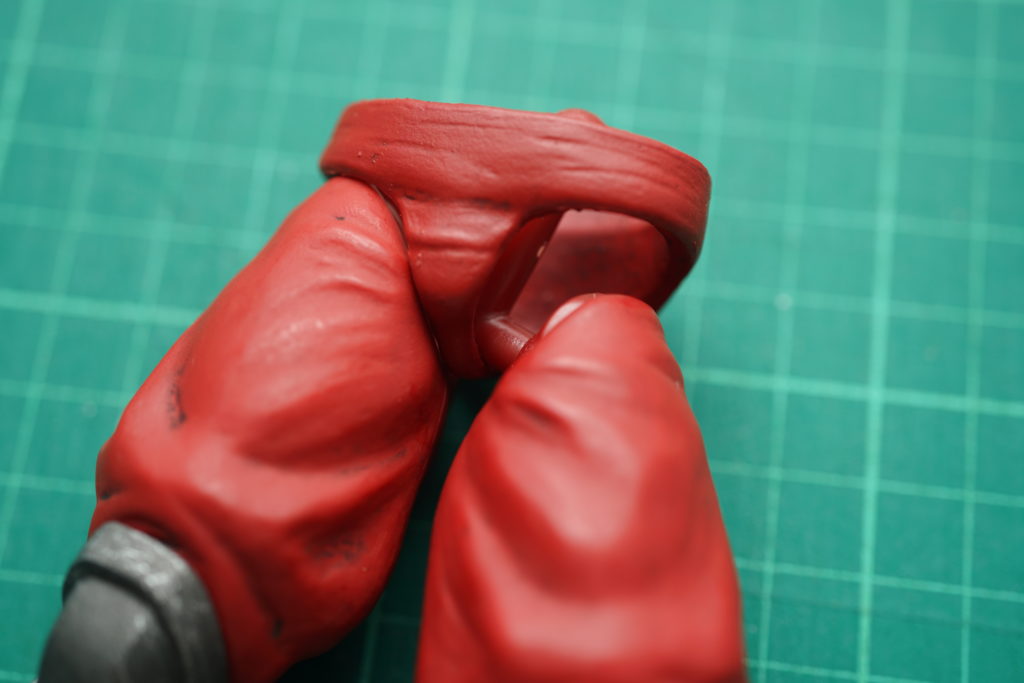 The figure is well articulated despite its bulky appearance although some parts are hard to move. The body joints are connected via ball joints and the hands via pegs. **the figure has noticeable wear and tears especially in the pegs and joints part 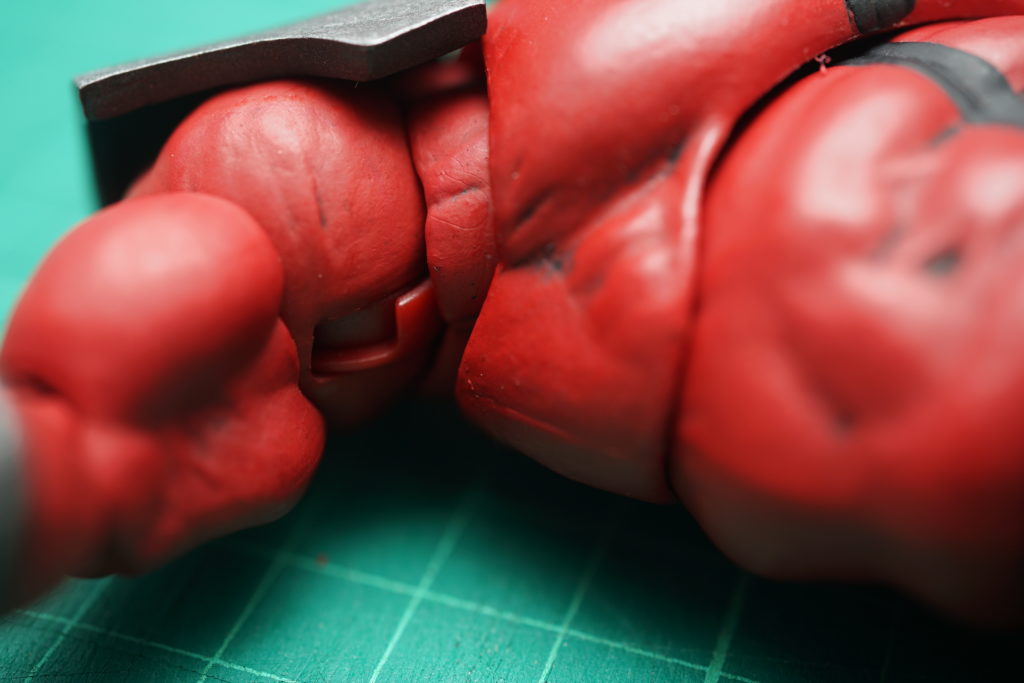 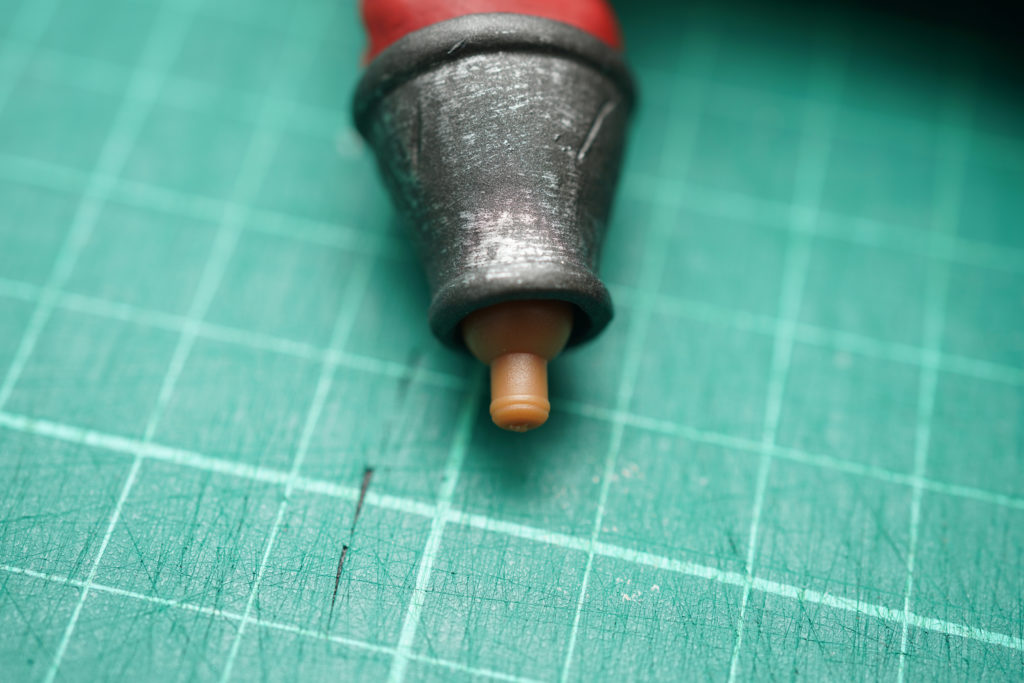 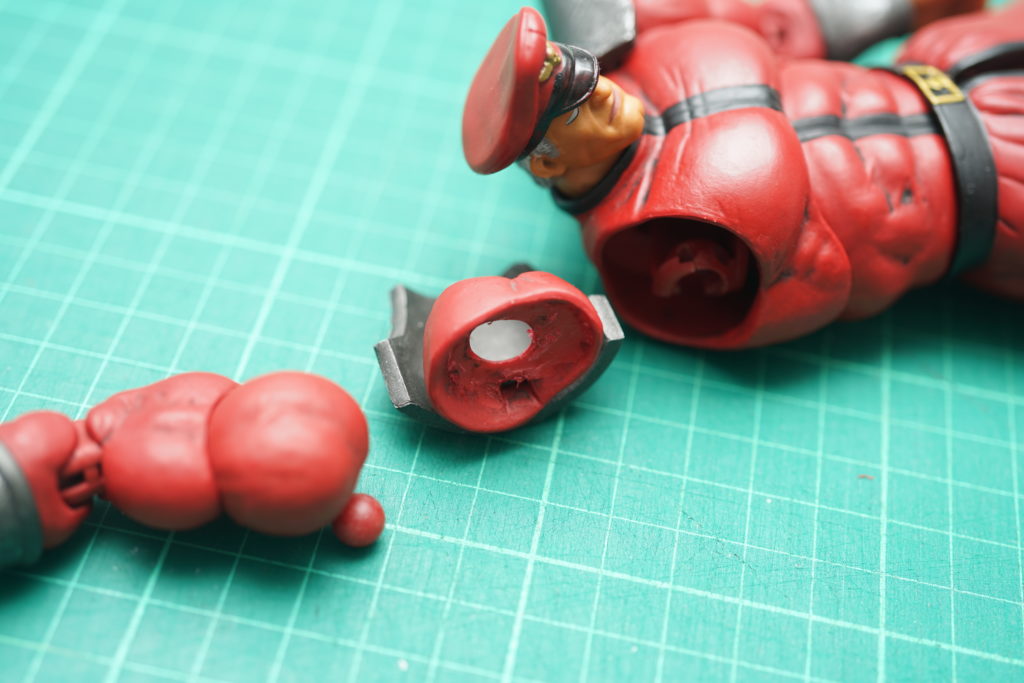 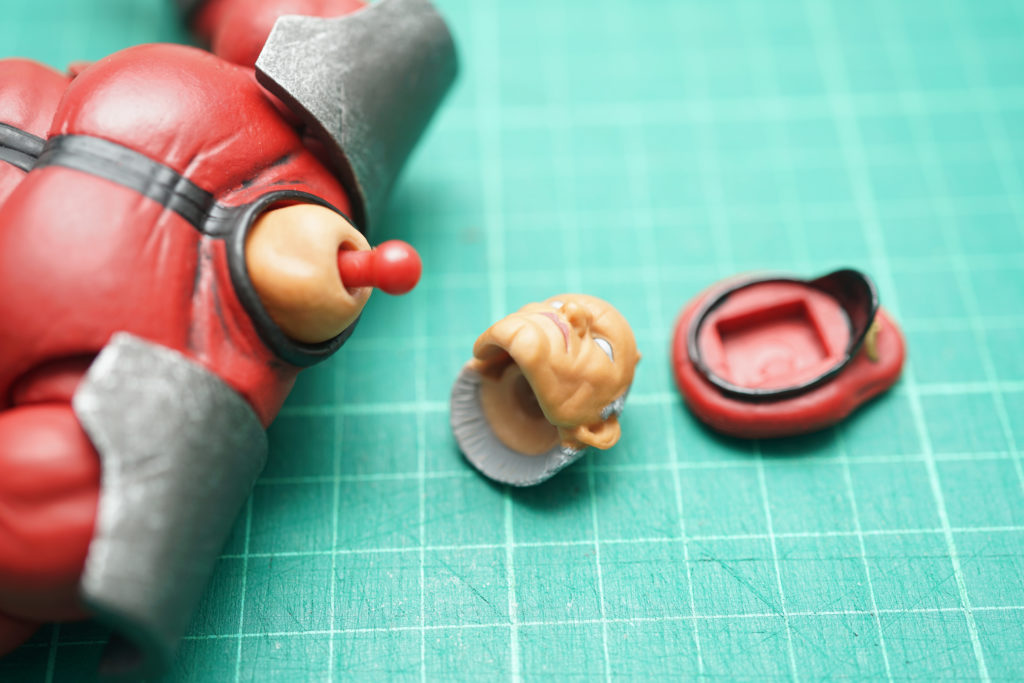 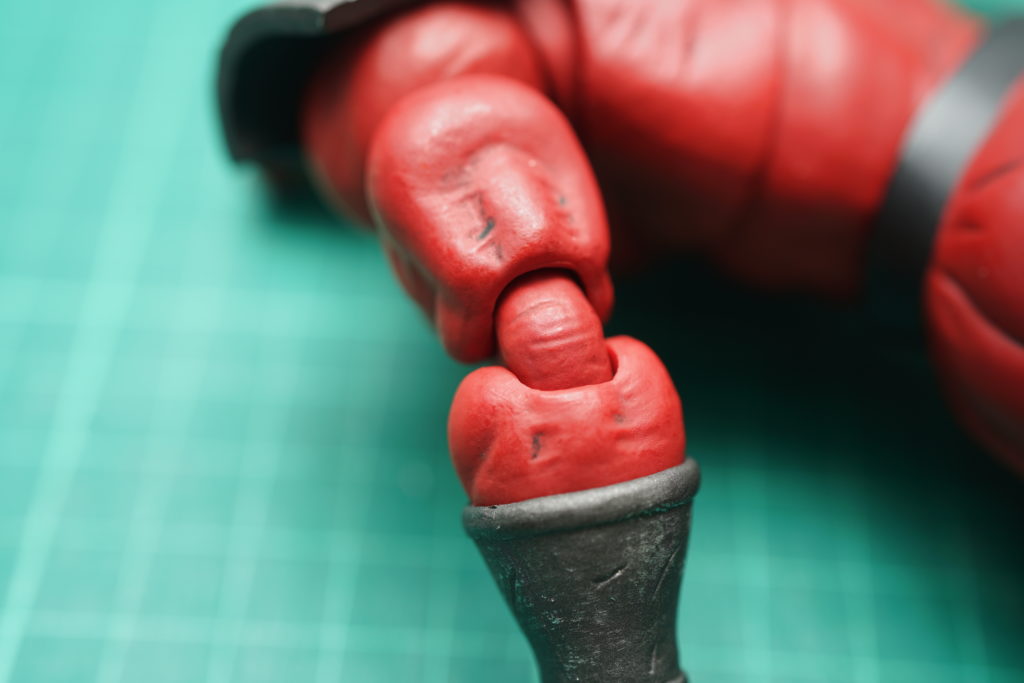 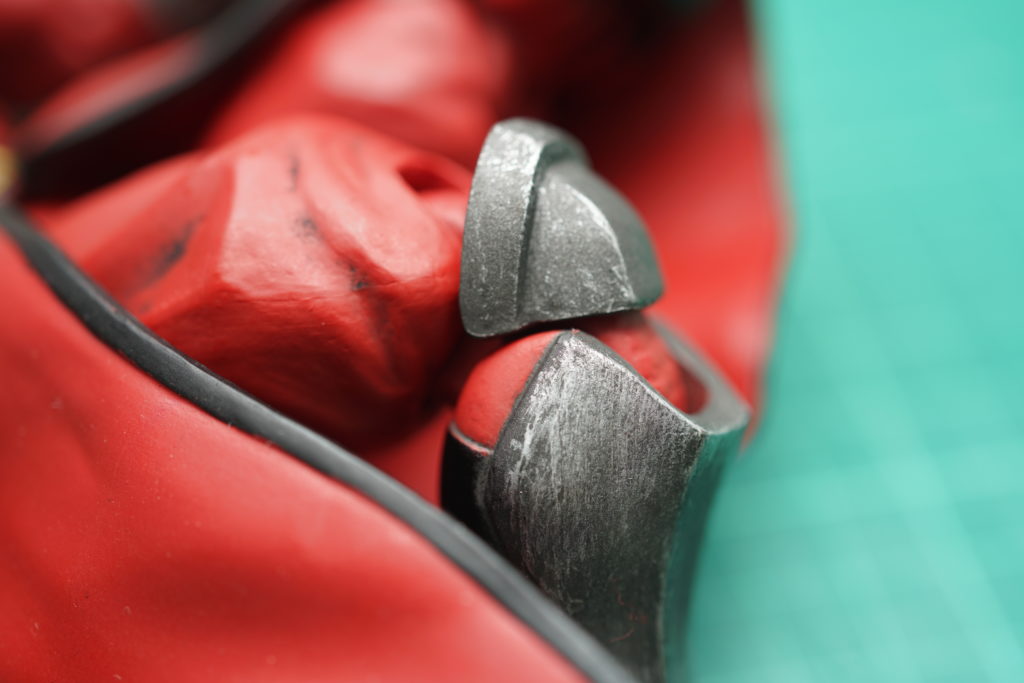 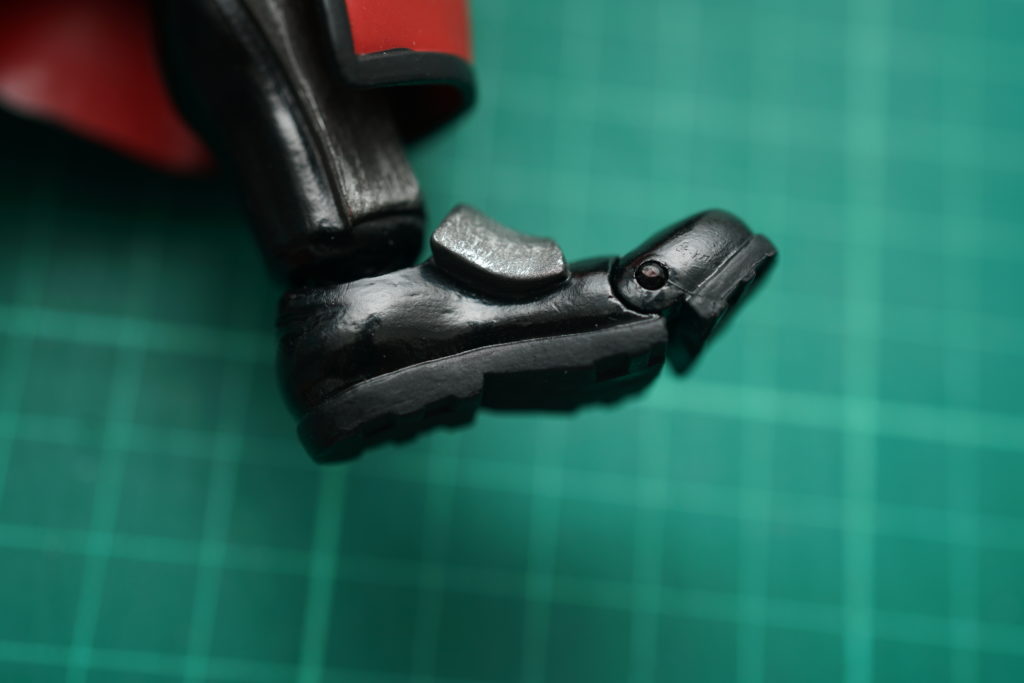 The figure comes with an extra cross arm replacement for his signature taunting pose. The arms can be separated so you can easily connect it to the figures’ body. You can also change its suit’s skirt – the additional replacement would be a blown up effect skirt for M. Bison. The set also has 2 additional face plates aside from the default face – the evil grin and the laughing face plates. 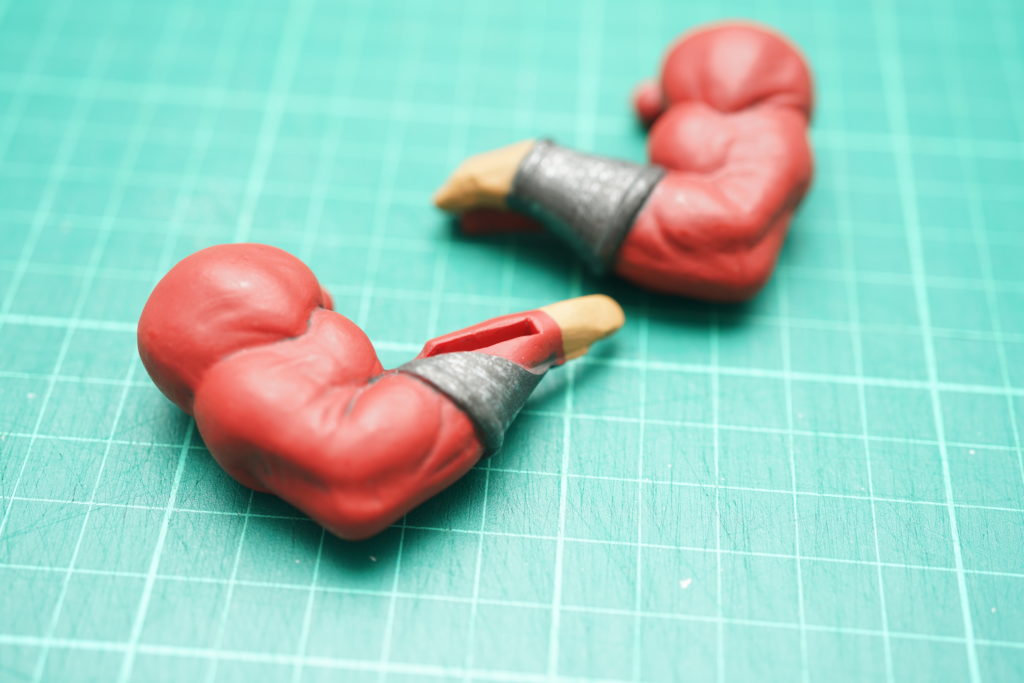 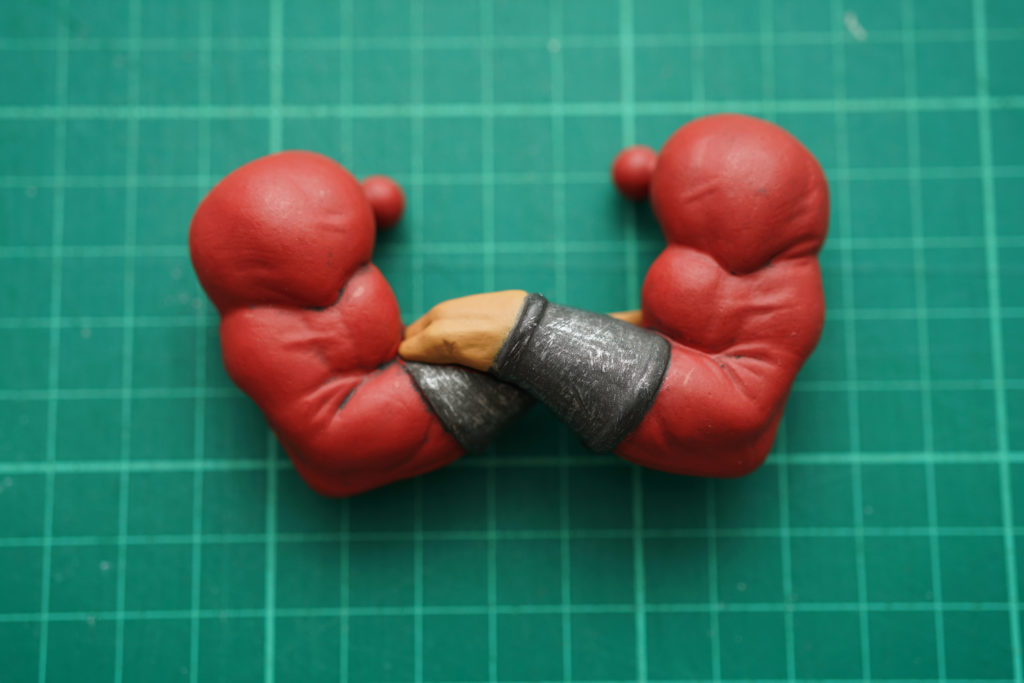 The set of interchangeable hands are nice – you’ll have variations from grasps, open palms and even colored palm that fits well with the purple flame effect included in the set. 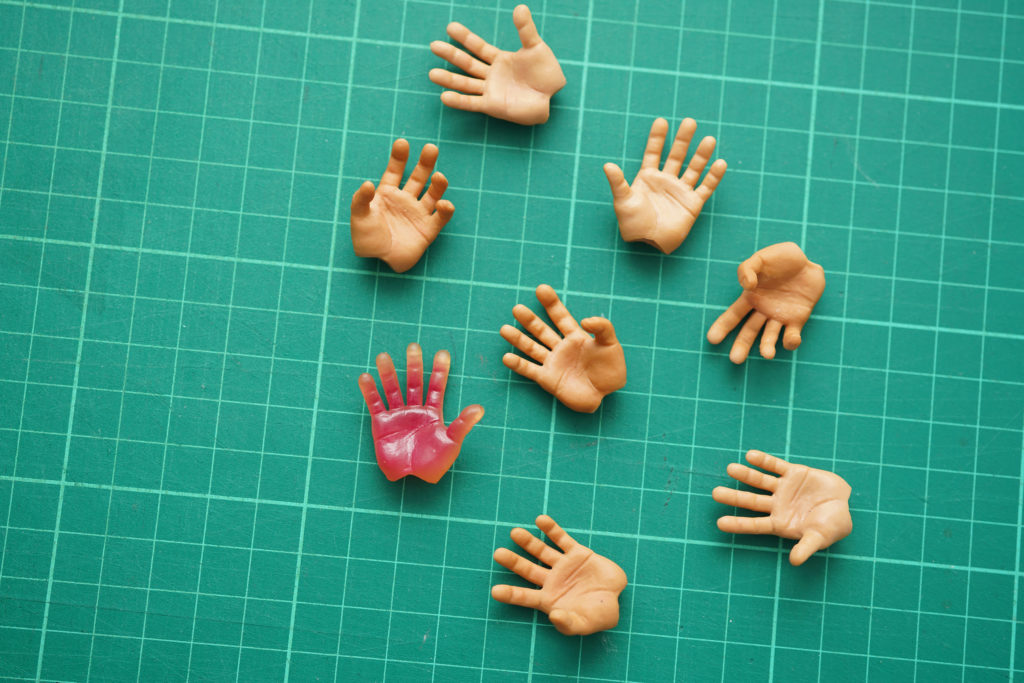 This set has a flaw similar to the Ryu set that I’ve review, the feet included in this set are both left in orientation. Again, if you’ve encountered the same issue, you can contact your toy supplier I’m sure they can do something about it. 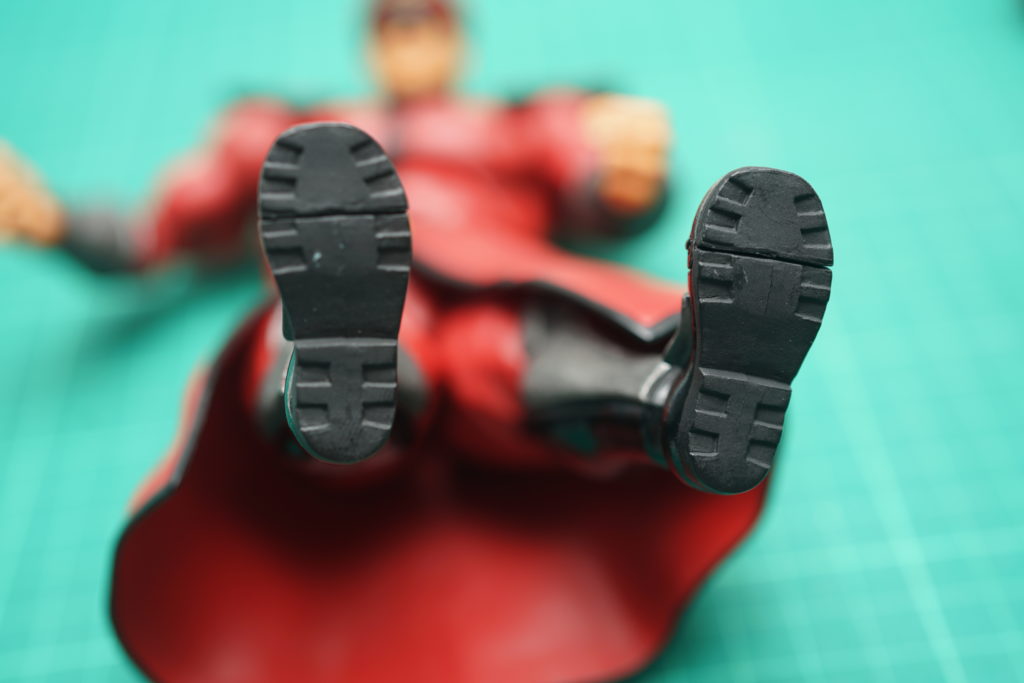 What I really like about this set would be the  stand and the base included in the box. The box and stands are different from the usual 1:12 standard, this is more sturdy and bulky – although not as varied when it comes to bending unlike the other stands. 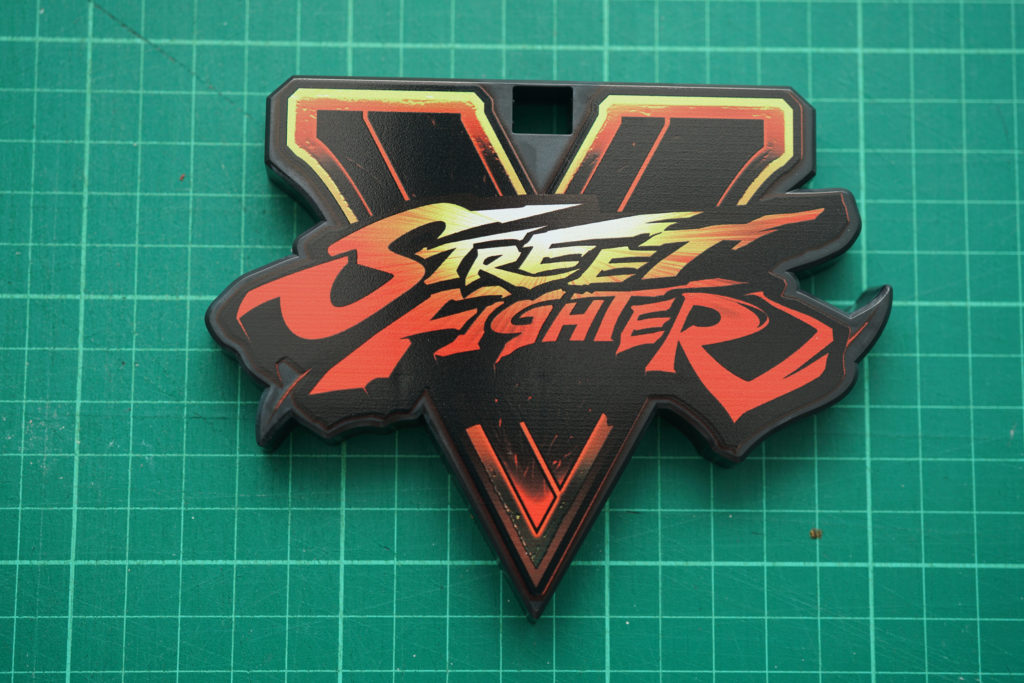 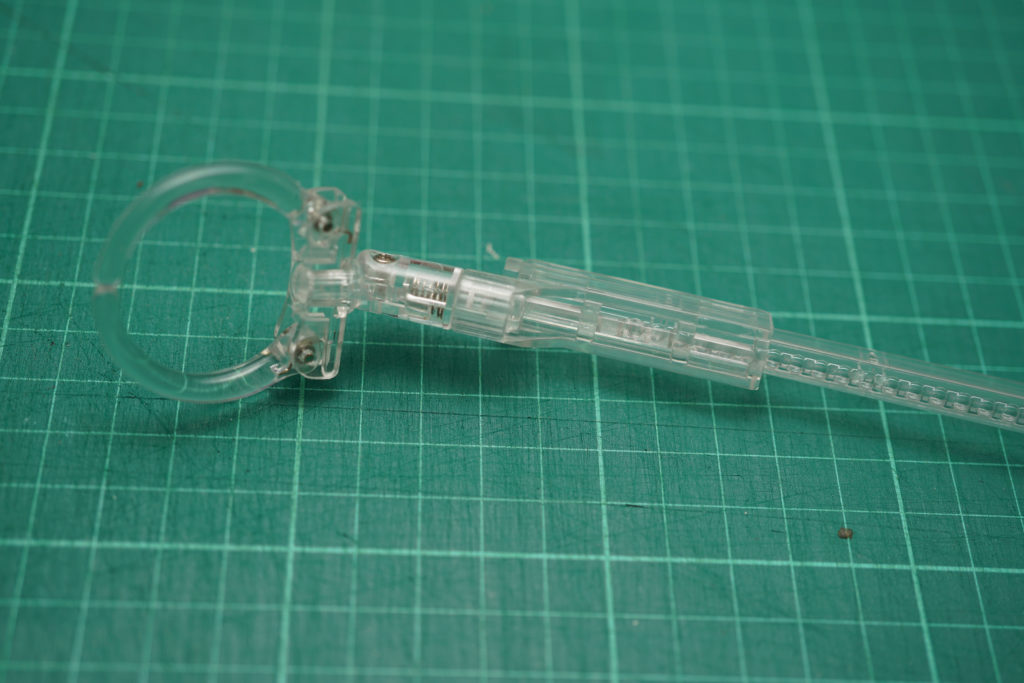 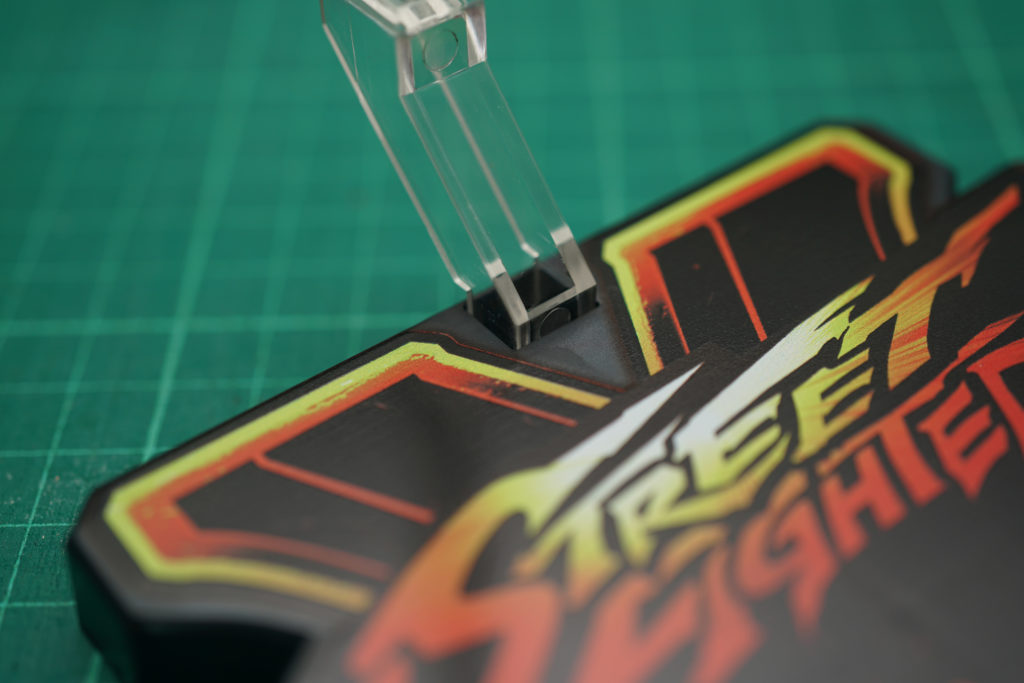 I don’t recommend that you constantly separate the upper and lower parts of this figure – as I said, the wear and tear of the plastic might be a problem which may loosen its contact with each other. Overall, this is still a great figure to add to your Street Fighter collection (if you have an existing Street Fighter collection already), also it scales well with the female S.H.Figuarts Street Fighter figures – Chun-li and Cammy – if you’re planning to take photos of them. 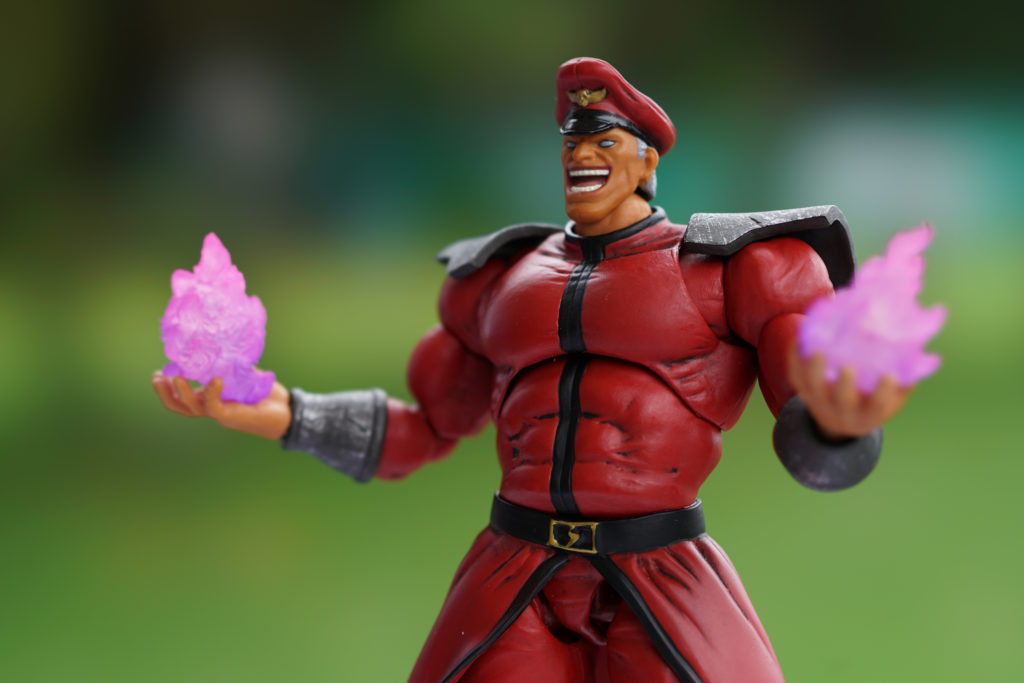 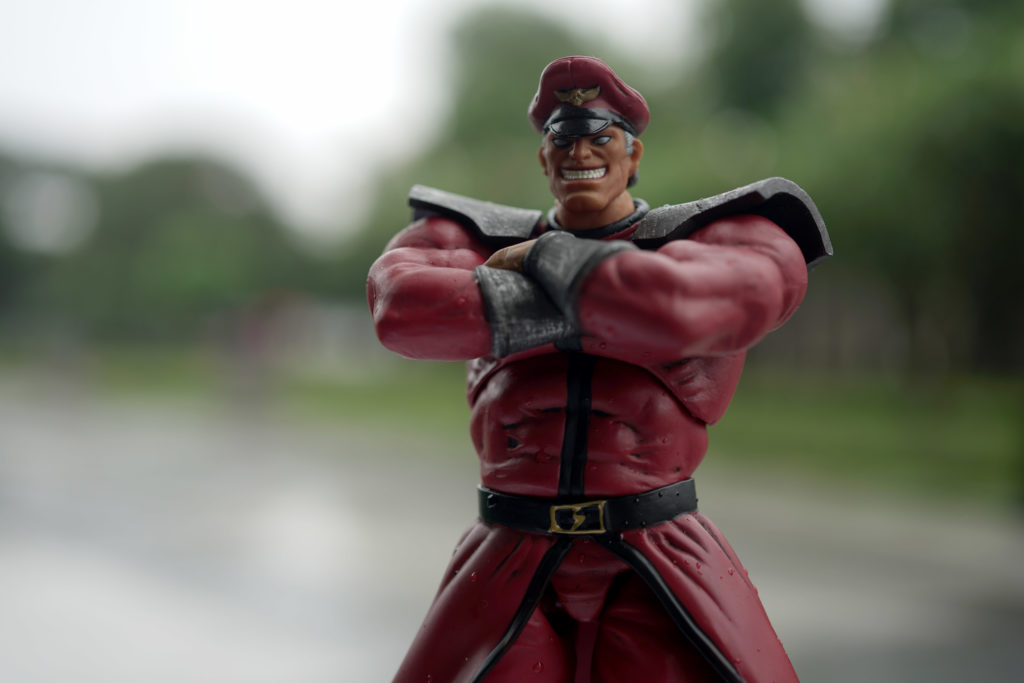 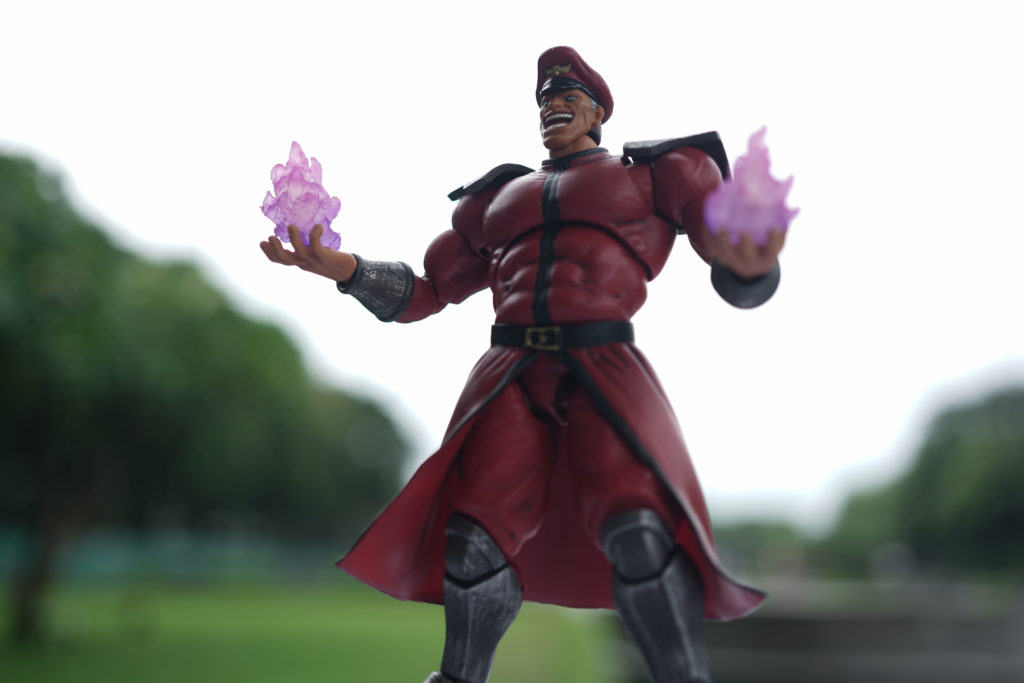 You may visit Greattoys Online to get your own Storm Collectibles Ryu or you may check out other specialty toys stores online.