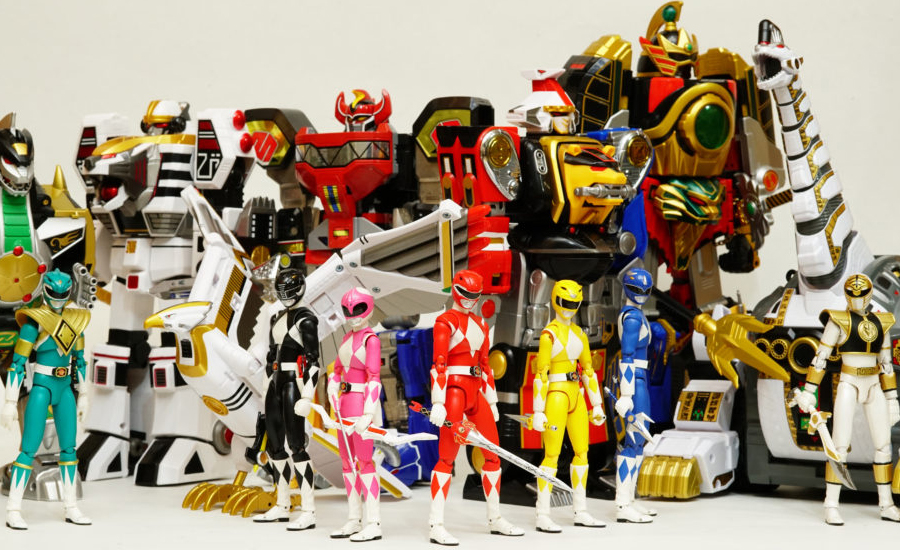 It’s always fun to unbox something that you can combine, it reminds me of my childhood – when I got my first Dino Megazord.

In case you missed my Falconzord review, here’s the link. 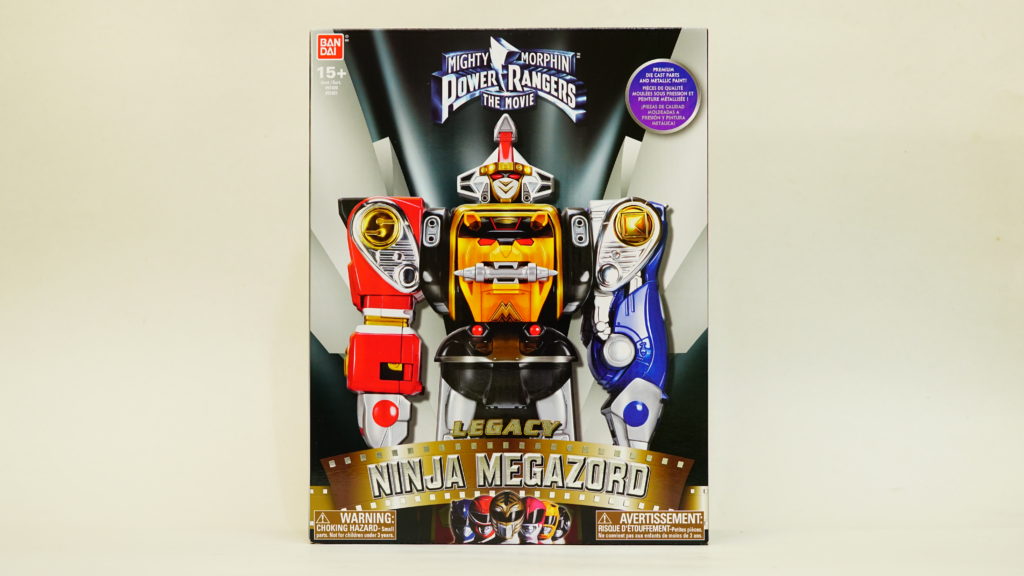 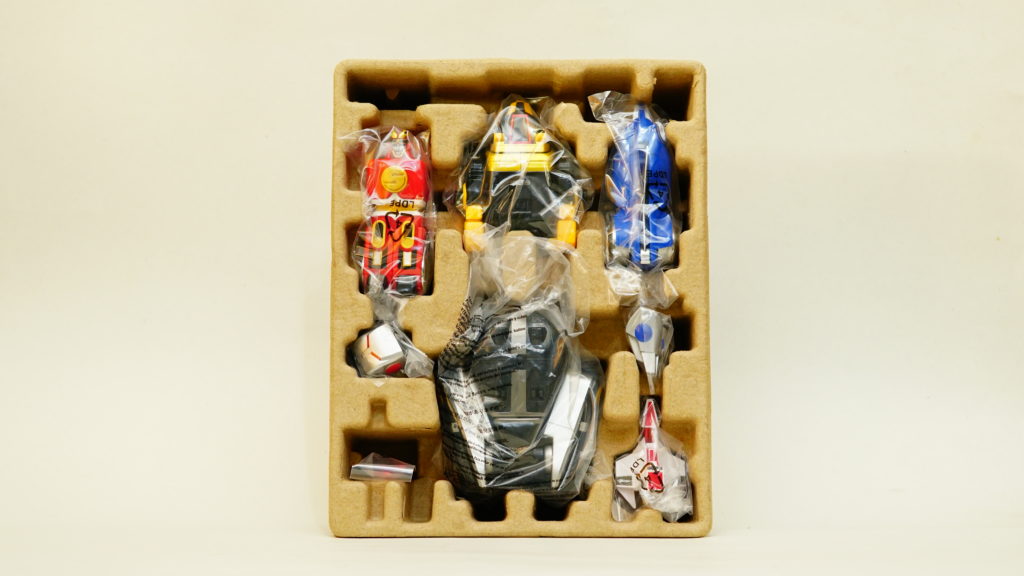 Just in case some of you would ask why the box (Falconzord and Ninja Megazord) is different form the other Legacy boxes (mostly green and not chromatic), this is because the zords first appeared in the MMPR movie in 1995 before they introduced it in the series, season 3, on the same year.

So let’s start with the biggest zord in the group, the FROG! 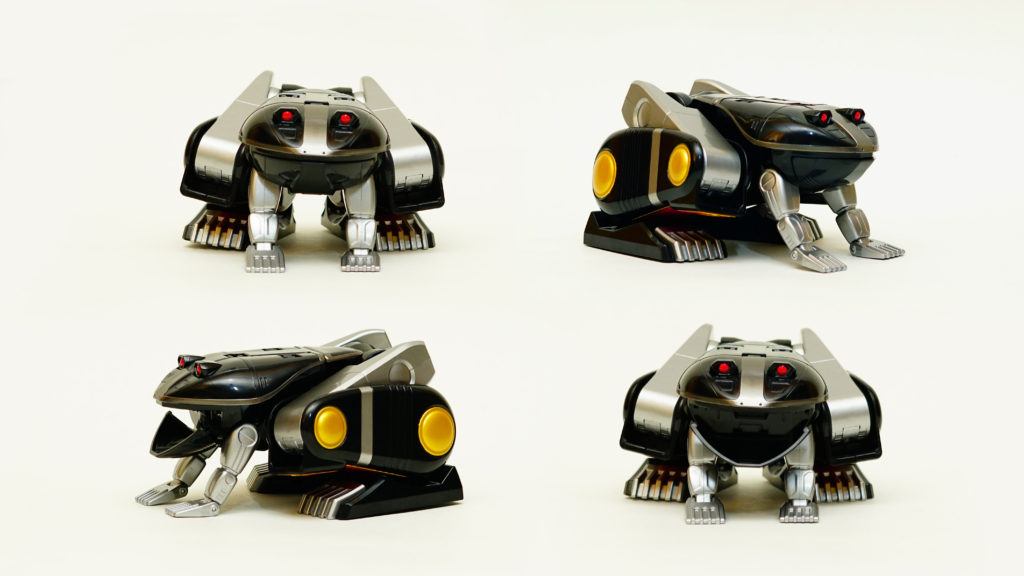 Leg articulation on this figure is very spot on! It can be extended and folded like how a real frog would move. The mouth can be opened, though it looks weird when you look at it sideways. This figure has the right amount of die cast parts, I hope the die-cast parts wouldn’t have an oxidation issue similar to the Dino Megazord (the parts turns white and dull, it can be removed when cleaned though)

This zord transforms into the zord’s main leg and feet. What’s good about this part is that you can spread the legs open! 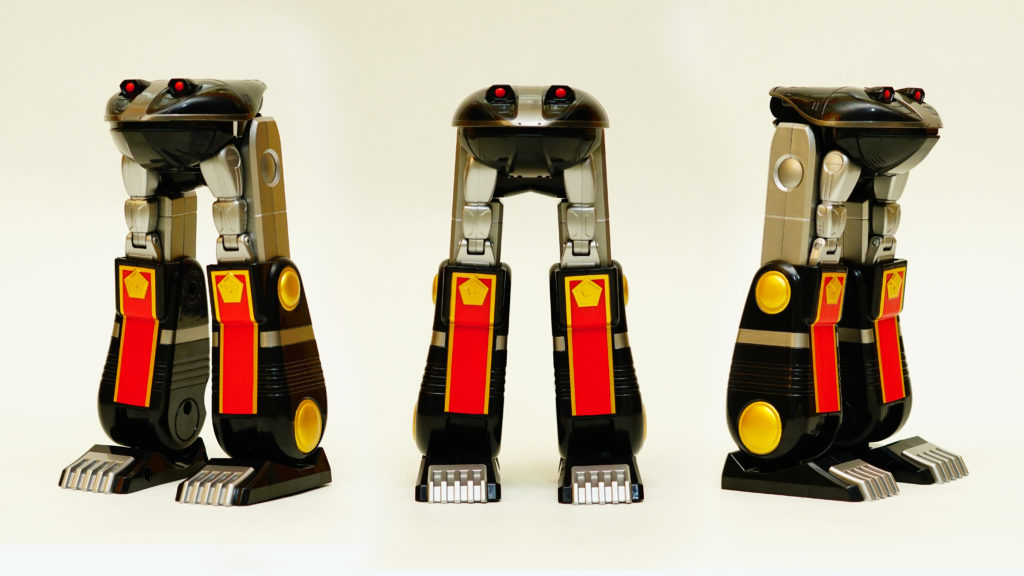 Next is the BEAR zord!

The bear zord is at its Ninja Megazord form when lifted out of the box (except for the mouth piece position). So to transform it to its animal form, you just need to extend the body and pull out the legs hidden inside its body. The legs can be moved and posed and the mouth can be opened as well, just good for a “bear-roaring” action pose! You can also store the Wolf and Ape’s battle hand cover in this zord. 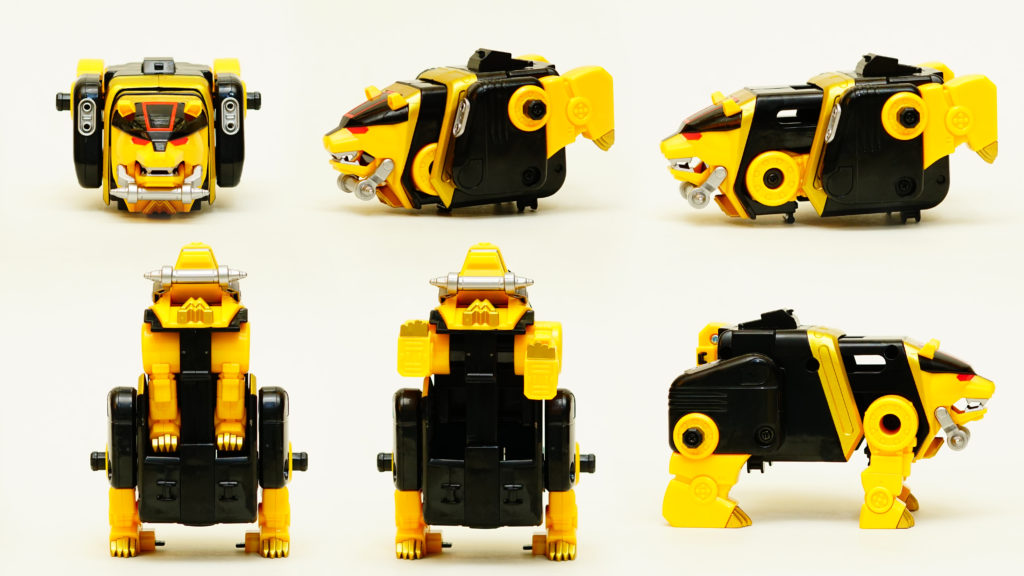 Next is the agile Wolf zord

Same as the bear zord, when lifted from the box, it’s at its Ninja Megazord form – the left arm. You can unfold the legs and the tail by pulling it from its body and the forelegs can be folded – you can create dynamic poses with this zord because of the good articulation on the legs. Again, the mouth can be opened – similar to the Bear and Frog zords. 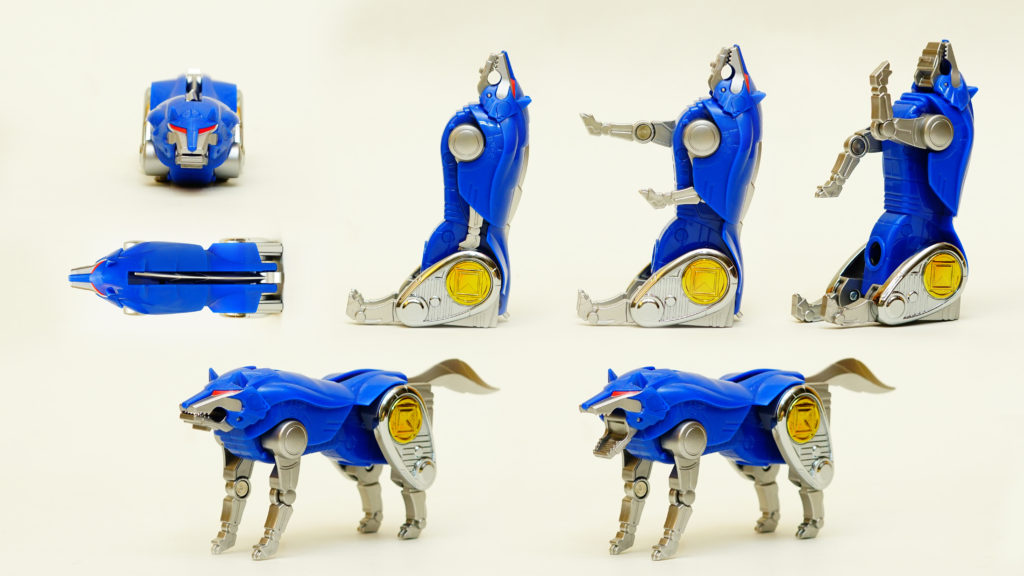 Next is the Ape Zord!

To form the Ape Zord you just need to extend the body and split the lower part to unveil the legs. 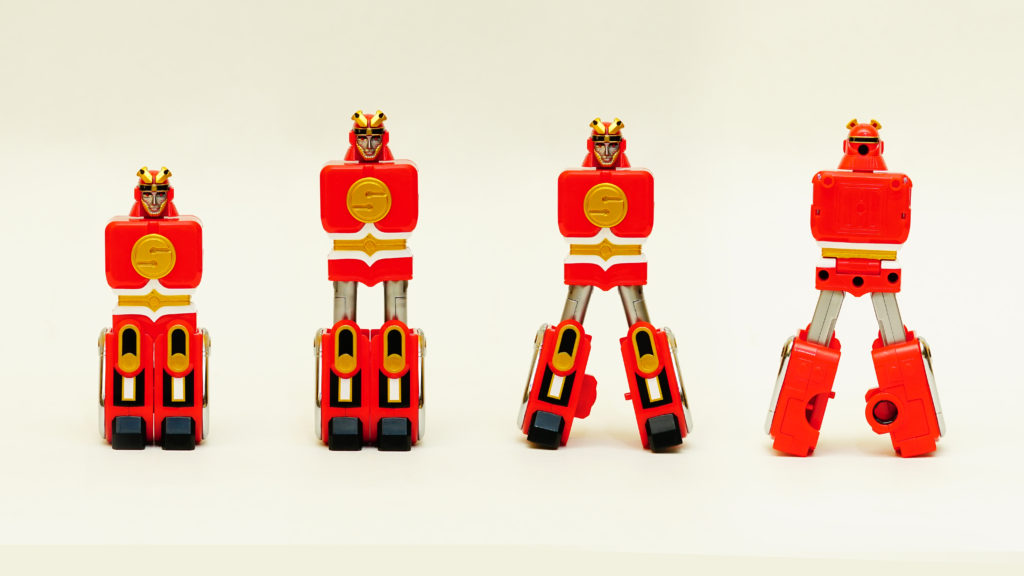 The arms are hidden behind the zord’s back part. The arms can be folder thus it can be posed as well, in short – it’s has a good articulation. The weapons are stored separately and it can be combined into one – forming a longer weapon for the Ape Zord. The back part has holes so you can store the weapon when not in use, as seen in the photo below. 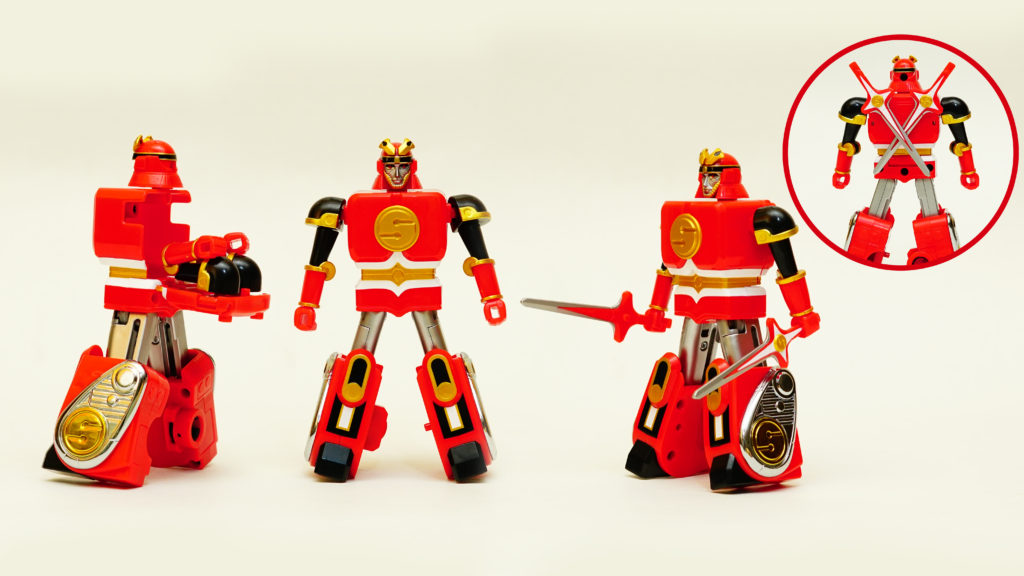 The last zord is the Crane zord – with lashes!

This one is very interesting because there are some design changes compared to the first Ninja Megazord release. One the next is no longer “pink” and it has lashes! I think the reason why they made it red rather than pink is that for it to look more cohesive as a whole and for it to follow the original Megazord color when it was first released. The zord is very interesting even if it’s the smallest zord in the group. The head can be tilted – straight for crane action and down for the Ninja Megazord’s face form. 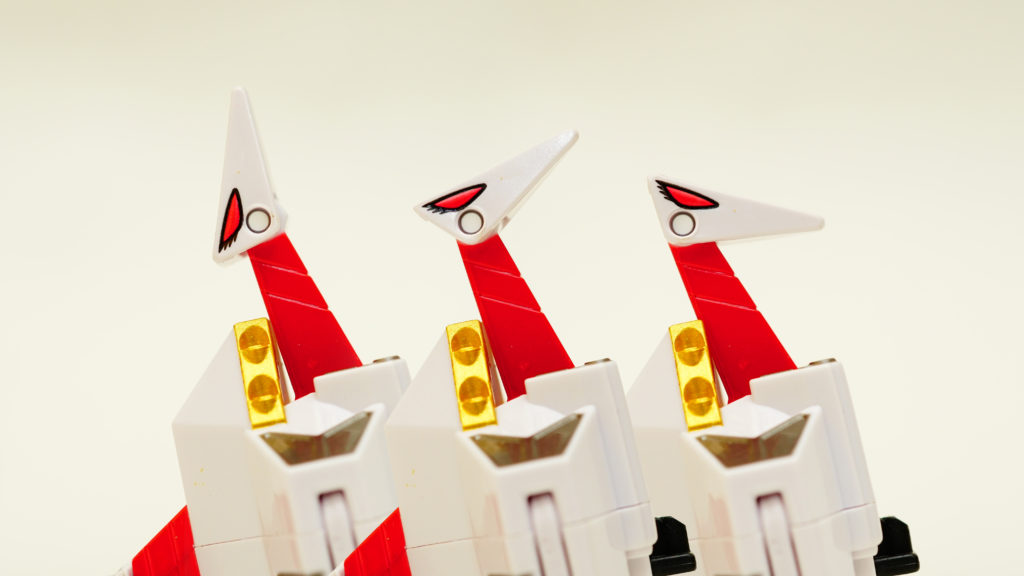 The wings can be folded on the sides and the head is hidden below the crane’s body. The peg connector for the body can be found underneath the body as well. 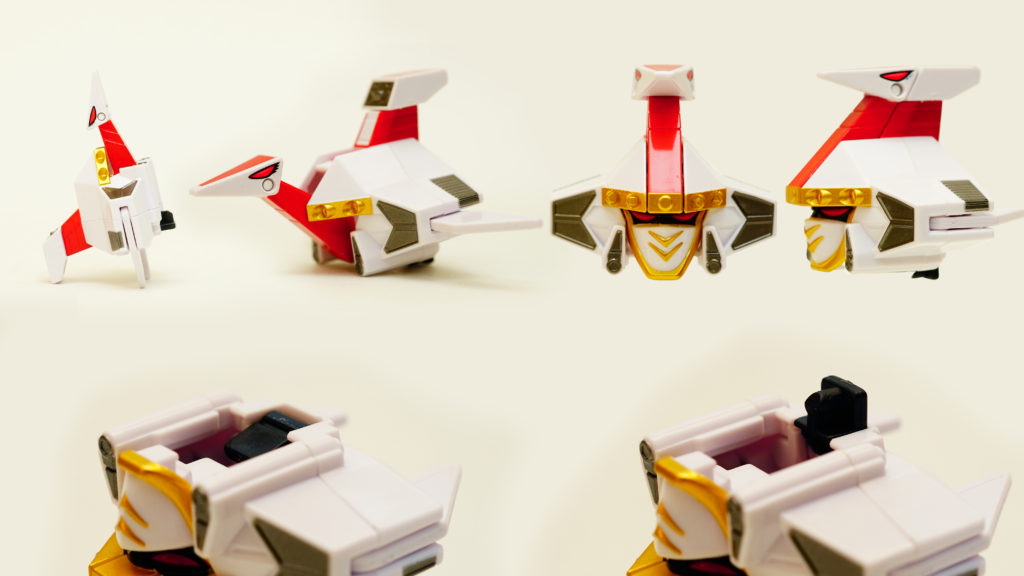 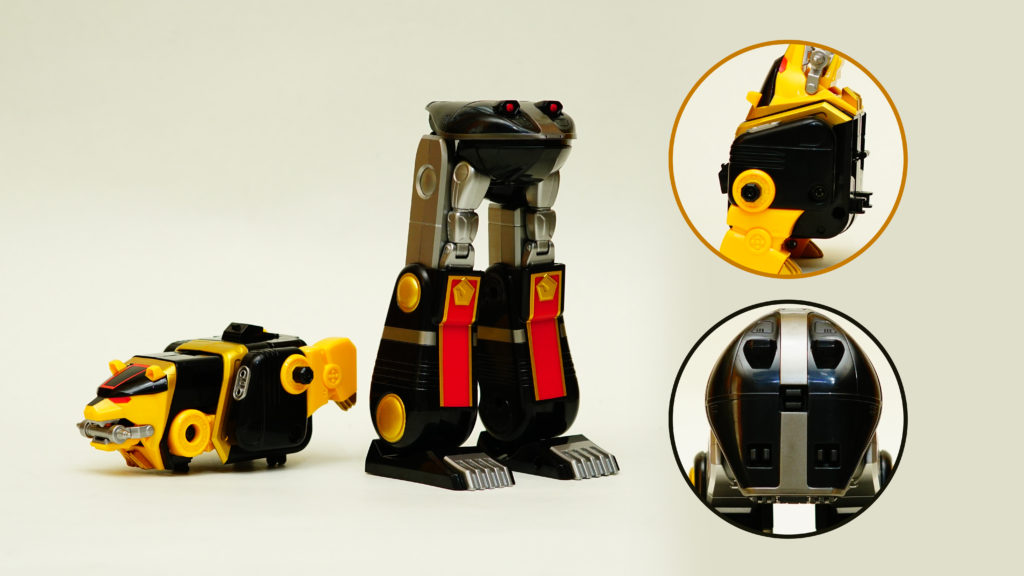 Now to connect the arms using the Ape and Wolf zords. You need to connect the had cover of the zords to its body to form the knuckle and chopping hand forms. You just simply connect the round pegs to the Bear zord’s peg, when you hear a clicking sound it means that the zords are connected properly. 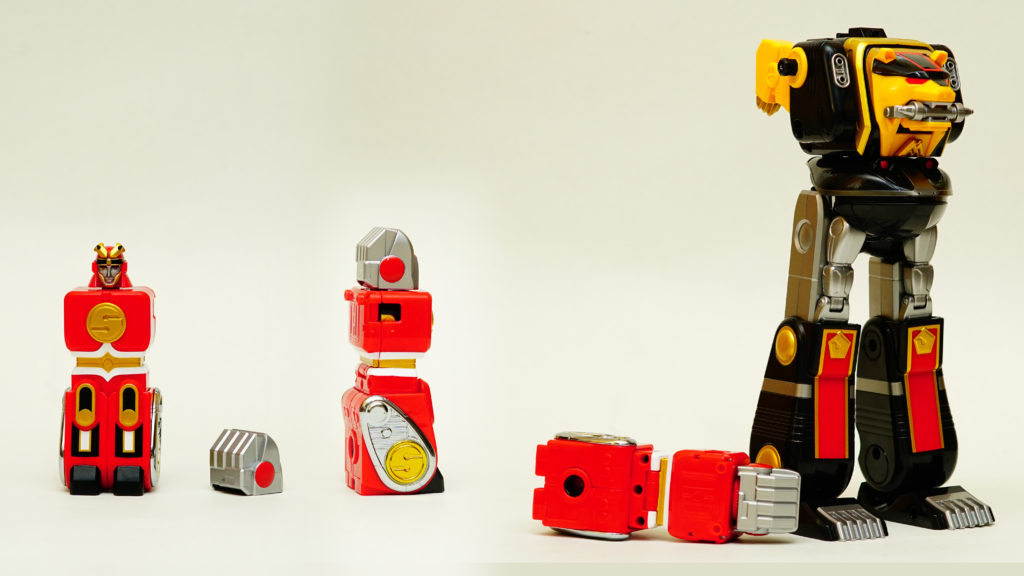 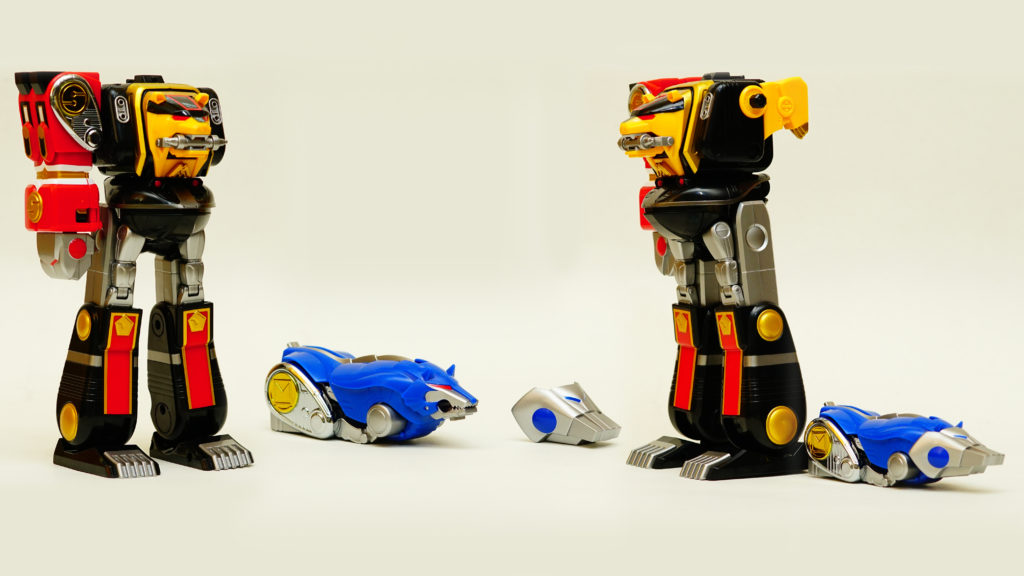 To connect the zord’s head you just need to lift the peg connector from the Crane zord to connect to the peg in the Bear Zord. 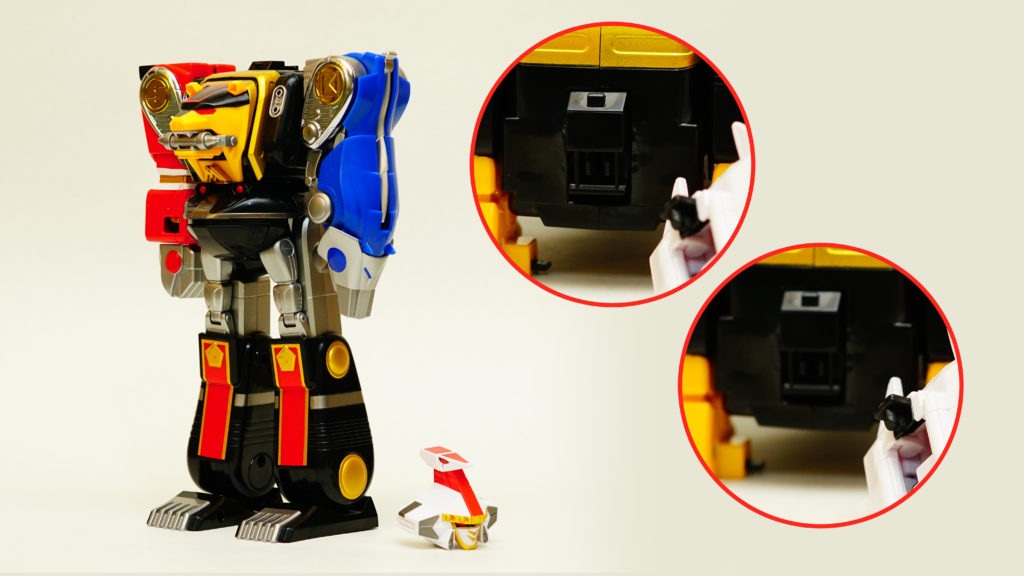 AND now we ahve the Ninja Megazord! Overall, the figure is pretty solid for its price (if you think about it maybe cheaper than the Falconzord *sigh*)

I really like this zord, maybe better than the Thunder Megazord? Mainly becuase this zord has better articulation, right die-cast amount and the colors are very nice – paint job on this figure is super nice. 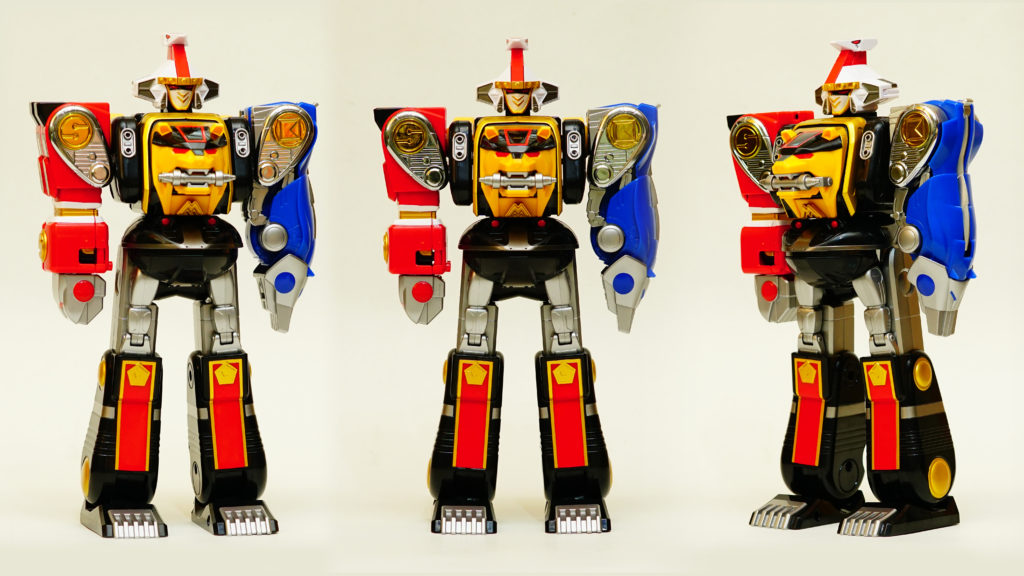 the good thing about this zord, similar to the show, is that you can combine the Falconzord to form the Ninja Faclcon Megazord! The combination is not as complicated as how the Dino Megazord and the Thunder Megazord combines with the Dragonzord and the White Tigerzord respectively. You simply connect the Falconzord to the Ninjazord’s back and that’s it – life is easy. 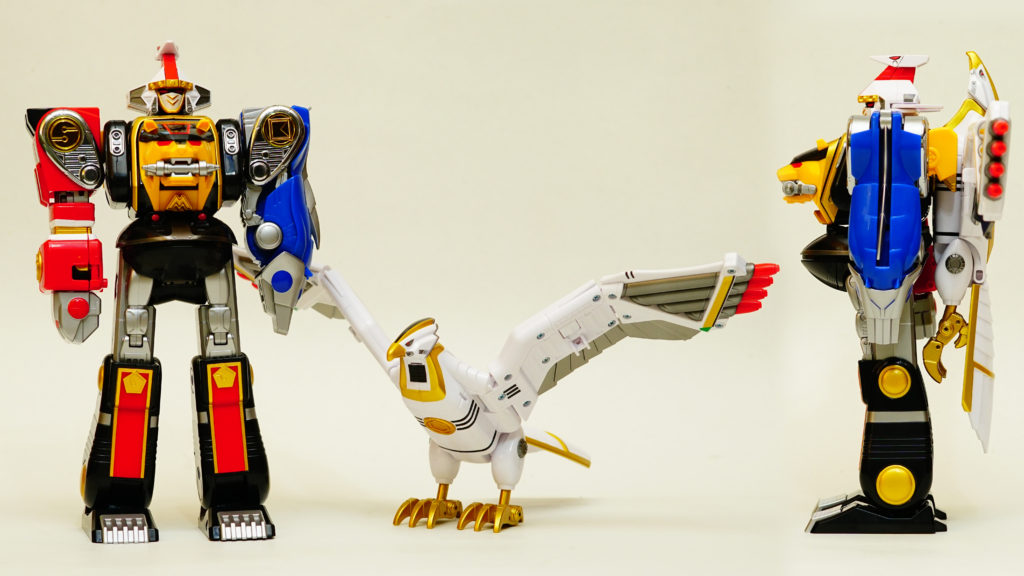 The Ninja Falcon Megazord can be combines with Titanus (the carrier zord form the first season) similar to the Mega Dragonzord. Now the Titanus can be worth it because it has two use now – though I still find it expensive. 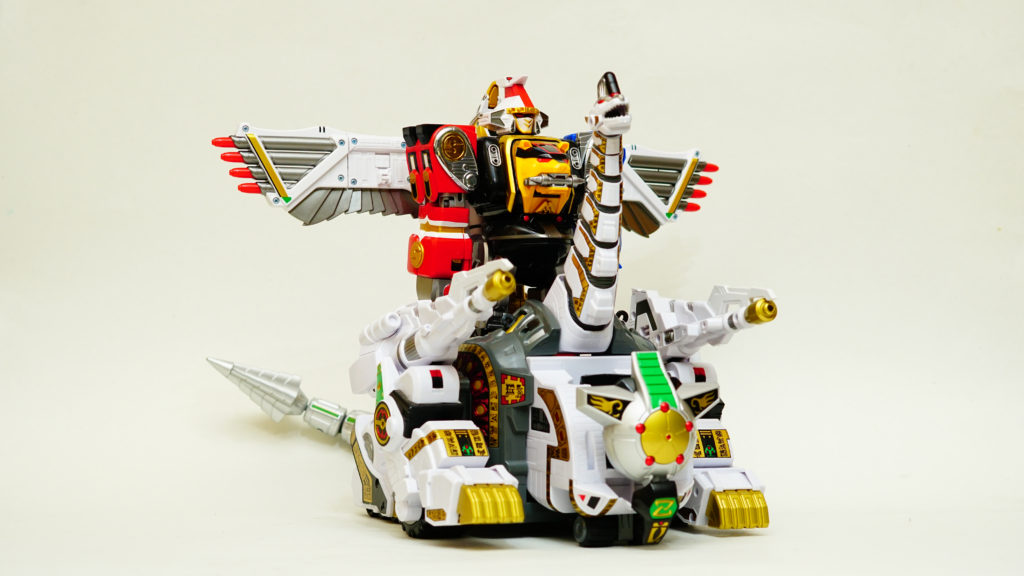 The Ninja Megazord is now available for sale at GreatToys Online! Make sure to get yours now – since I’ve been telling everyone that this is a very nice zord from the Legacy line.

Here are the three zords from the three MMPR series. 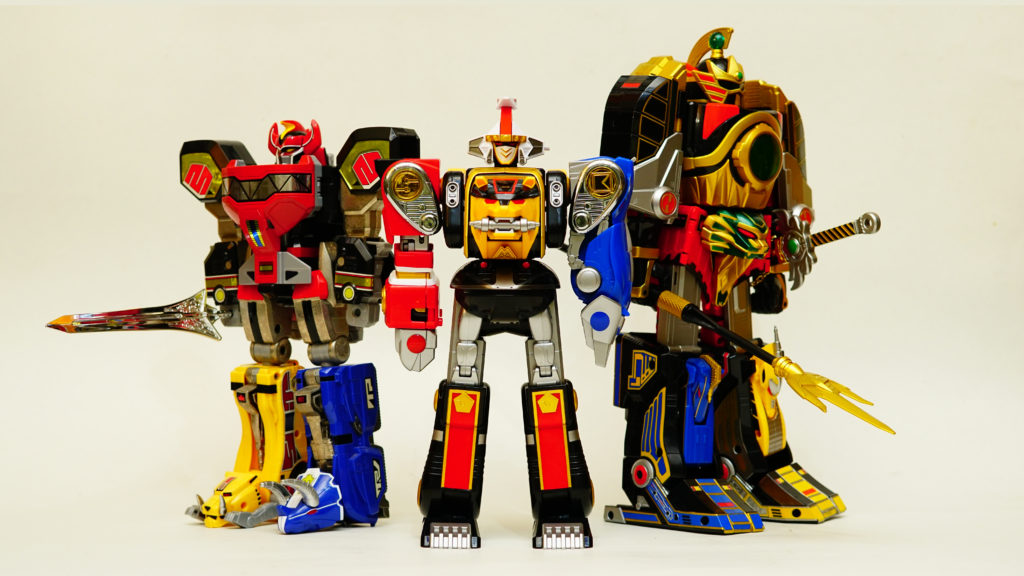 The Thunder Megazord is still the tallest among the three zords. If you notice, only the Ninja Megazord doesn’t have a weapon on hand, you can place one though but you need to remove the hand cover from the wolf arm and borrow the swords from either the Dino Megazord or the Thunder Megazord.

So far, here’s my MMPR collection, not including the helmets, morpher and the SRC Megazord. Share a photo of your collection as well! Use #justveryrandom in your posts so I can see your collection. 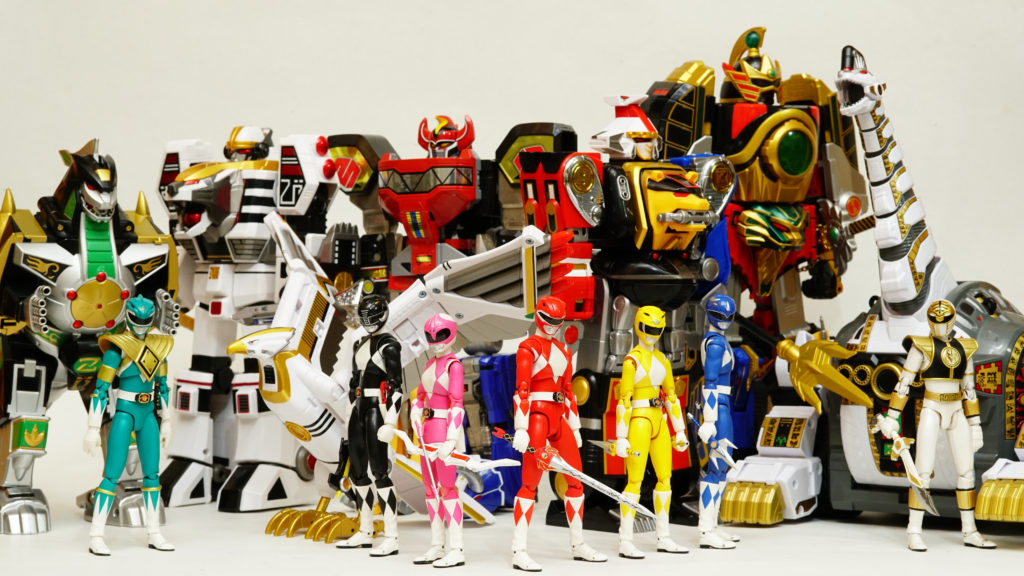 Where to get the Ninja Megazord?

The stocks are not yet available in Toy Kingdom, Toy Town and Toys “R” Us PH. You may visit the store to ask for availability or drop them an email.